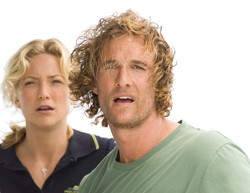 
Add a generous dose of slapstick to 2005’s Into the Blue and you have Kate Hudson and Matthew McConaughey’s latest venture, Fool’s Gold. Director Andy Tennant (whose résumé includes Hitch and Sweet Home Alabama) assembles the same basic elements here: a couple without a boat or funding find both in order to mine sunken treasure from under the noses of some thugs to whom they owe money.

Fool’s Gold, though, turns Blue’s penniless brooding romantics into a pair of penniless charmers, Tess and Finn, trying to downplay a little lingering attraction fresh out of their divorce proceedings. The last time Hudson and McConaughey kindled the same sort of love-hate chemistry the two starred in How to Lose a Guy in 10 Days. Their repeat rapport keeps Fool’s Gold soundly afloat as well. As McConaughey himself has said in recent press, the two “flirt well together.”

Not so sizzling is Donald Sutherland’s unfortunately anemic presence as the yacht-dwelling billionaire who becomes entangled in Tess and Finn’s obsession with an 18th-century Spanish shipwreck. Sutherland barely smacks his mouth to deliver his lines, as if they’d roused him from a nap between takes. Or perhaps the director just didn’t know how to eek a little sparkle from the otherwise competent veteran. Trainspotting’s hilariously bumbling Ewan Bremner is likewise underused as the “Ukranian sidekick” who delivers one or two ill-conceived zingers that fail to zing. Alexis Dziena, brief and brilliant as Lolita in Jim Jarmusch’s Broken Flowers, picks up a little of the slack with her eye-batting bubble-headed stint as Sutherland’s famous daughter Gemma, who drops in for the adventure.

It’s somewhat disconcerting that Gemma, who wonders if the sea is “like, connected” and tries to untangle the dense layers of meaning behind the expression “at anchor,” is easily able to follow the convoluted story of the Spanish treasure, the family behind it, the ship switcheroo, the fate of the illegitimate son at its helm … and, well, the more Finn goes on with the tale the less sense it all makes. Nevertheless, though the threads of the story within the story don’t seem to come together too tidily, the comic pitfalls and the notable chemistry sweep the viewer along past these lesser details.

Given the post-Oscar-contender onslaught and the pre-summer blockbuster season that usually brackets a long hum-drum slump at the box office, Fool’s Gold offers an entertaining couple of hours that’s about as refreshing as the wide shots of the delectably sun-drenched coast in the middle of the winter outside. •