Of analogies and Alpha Dogs 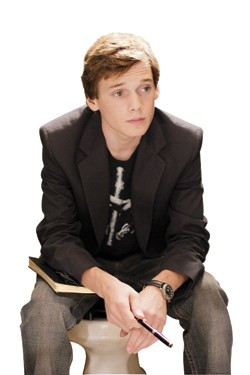 I mention this because, as it turns out, the kid did me a solid: By slyly piling on the (admittedly largely circumstantial) pathos — but stopping just short of overdoing it — Yelchin kept me invested in the fate of his imperiled-angelic-youth/kidnap victim just long enough to allow the film’s slam-bang final 25-or-so minutes to have the desired effect, all but redeeming the assorted miscues that preceeded them. Or, indeed, redeeming them outright. To be entirely honest, I still haven’t really decided. But every now and then, I kind of can’t get Alpha Dog out of my head.

Consequently, a fairly site-specific (not to say “exclusive”) colloquialism has sprung up quite organically around our household: When a film, for whatever reason or by whatever method(s), has convinced you by its midpoint (or further) that you’ll leave the theater smugly appalled by its seeming ineffectiveness — and then, perhaps imperceptibly at first, executes a nimble turnabout and begins subtly kicking your mind’s ass all over the stadium seating ... said film has Alpha Dogged you.

And that’s what the right bit of key casting can do for your film: buy you the requisite time to Alpha Dog the bananas out of an unsuspecting viewer. The question remains then: Up-and-coming Yelchin is a proven Alpha Dog (verb form) wingman; does he pull the same duty in Charlie Bartlett?

Well, yes and no.

Yes, to the extent that young Yelchin’s performance as the titular Bartlett — a private-school castaway who, left to his own devices in the wilds of public high school, manages to achieve nigh-Messianic popularity by running psychiatric and pharmaceutical services out of the boys’ lavatory — comes reasonably close to supplying the film with enough heart to outstrip its various shortcomings.

No, though, in the sense that Bartlett pretty much shows its hand early on: If you’re enchanted within the first 15-20 minutes, you’re set; if not, alas, don’t expect to change your position significantly.

Your position, predictably, depends in some measure upon how you feel about the kid. Charlie, most likely, is exactly the character you’re imagining, give or take a trait. Unremittingly precocious, eccentric and/or mildly nerdy, starved for acceptance, given to fits of “big-idea” brilliance — any of this on the money? So, yeah. You’ve seen this story before. The test, then, is in the telling. And sadly, the telling here is miles from perfect.

Bartlett, fittingly, feels like a first film. It’s flecked throughout with a decent store of genuine laughs and sweet, budding-romance moments, but these are offset too frequently by painfully conventional bits and notably odd directorial choices (watch for the intersection of both: a lengthy, fast-motion-cum-fisheye Ritalin fit). Yelchin is abetted by a more-than-able satellite cast, but even names like Davis and Downey Jr. struggle to compensate for their characters’ off-putting dearth of nuance.

Just about every Bartlett review you dig up will likely mention either Rushmore or Ferris Bueller’s Day Off (and it’s easy to see why), but this film, frankly, is far too spotty and telegraphed to be mentioned with the former, which may be my favorite film of all time. It’s more like a darker, She’s All That-level flick — for which, let’s not equivocate, there’s very probably an audience.

As for the latter, I don’t much care. I may be alone here, but I kind of always wanted to punch that Bueller kid in the face. •