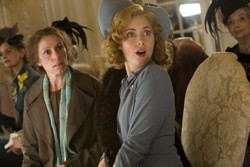 
If only Miss Pettigrew lived for a week … an awful lot does happen in just this one day. Nevertheless, this spring if you find yourself in search of an estro-movie with high production values (that is not Sex and the City) and featuring Oscar-nominated/winning actors, look to Focus Features’ farcical deco-dramedy.

I know, movies with Miss/Mrs./Ms. So-and-So, etc. in the title never seem to pique my interest, either. (And Mr. Such-and-Such doesn’t bode any better.) I think it has something to do with all of them appearing from their previews to be about elderly women who finally take a chance. Hey, don’t look at me like I’m Jonah Hill at the Oscars; I’m not a sexist ageist. I happen to love Dame Judi (or should I say, Her Majesty, Mrs. Brown). I just fear the formula, that’s all. I couldn’t bring myself to see Venus, either, if that helps.

Anyway … as I was saying, Miss Pettigrew Lives for a Day is based on a 1938 book by Winifred Watson about a single, semi-homeless,
middle-aged woman, played here by the wonderful Frances McDormand. After losing her most recent governessing post — presumably for calling her employer an alcoholic — Guinevere Pettigrew, the daughter of a clergyman as she is eager to tell all, makes her way back to the soup kitchen. The employment agency from whence she has derived her clients in the past is through with her, so in a moment of desperation she steals the business card of a Miss Delysia Lafosse (Amy Adams).

Not five minutes after arriving at Miss Lafosse’s London flat, however, Miss Pettigrew discovers that her client is experiencing a different kind of boy trouble than she is accustomed to dealing with. In fact, Delysia, a glamorous singer and actress, is juggling three boyfriends and requires not a nanny, but a social secretary (and a bit of a life-coach). In 24 hours, both of their lives will be utterly transformed.

It’s giddy-fun to watch talents of such range as McDormand and Adams play off one another as a staunch, fraught proletarian and a waify, high-society type, respectively — particularly in this gorgeously designed world of chaises, hatpins, and, quite centrally, exquisite lingerie.

After embodying pure evil last year as Dick Koosman in Margot at the Wedding only to be virtually ignored by Paul Thomas Anderson in There Will Be Blood, it’s nice to see Ciarán Hinds at least afforded the honor of seducing Ms. McDormand in Pettigrew.

John de Borman, who worked with Pettigrew director Bharat Nalluri on TV’s Tsunami: The Aftermath, moves his camera with the luscious arcs of the period architecture he is capturing. With editor Barney Pilling, he keeps the tempo as light as the accompanying big-band music.

Miss Pettigrew, on the whole, is an undemanding film, and as such is bogged down by two or three unusually dark scenes suggesting London air raids. The intention is to add some seriousness and depth — to enforce that the characters must leap upon what they love because life could end at any moment — but they are atonal in quality, and life could end at any moment anyway, right? I mean, at McDormand’s age …