Unshackling the truth about torture 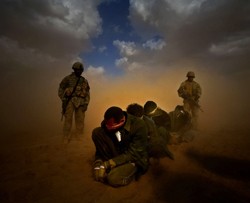 
Taxi to the Dark Side derives its title from Dick Cheney’s response to September 11. Insisting that we must “use any means at our disposal to achieve what is necessary,” the Vice President declared: “We have to work sort of the dark side, if you will.” This film denies that will, refusing to join that “we.” It derives its passion from outrage over dark deeds committed in our name.

“Dilawar took three passengers for a ride and never returned home,” reports Alex Gibney at the outset of the Oscar-winning feature documentary that he wrote and directed. Five days later, on December 6, 2002, Dilawar, a young cabbie who had been seized by an Afghan commander and turned over to American forces, was dead, the second of two fatalities at Bagram prison within a week. The initial report attributed Dilawar’s death to “natural causes,” but one observer described the corpse’s legs as “pulpified.” After journalists kept the truth about Dilawar’s torture from being buried with his body, reluctant authorities brought charges against some of those responsible. Soldiers were disciplined, but only one officer was prosecuted, and his case was soon dismissed.

Despite suspicions of his involvement in a rocket attack against an American base, Taxi to the Dark Side makes a convincing argument for Dilawar’s innocence and for believing that his Afghan captor seized him to distract attention from his own complicity. Of more than 80,000 detainees in American custody, only 7 percent were captured by coalition forces, and some surely fell victim to grudges or the greed of bounty hunters. Gibney uses the sad fate of one Afghan taxi driver as a means for examining how brutality has become institutionalized in Bagram, Abu Ghraib, and Guantánamo. Using graphic photographs as well as interviews with detainees, interrogators, lawyers, scholars, military officers, and government officials, he refutes former Secretary of Defense Donald Rumsfeld’s claim that abuses are the work of just “a few bad apples,” rather than a chain of command that spurns the rule of law. According to Colonel Lawrence Wilkerson, former chief of staff to Colin Powell, of 98 deaths in detention, 25 have been homicides.

John Yoo, who crafted a Bush administration memo that redefines torture, tells the camera that the Geneva Conventions do not apply to terrorists. Soldiers testify that, with minimal training in interrogation, they were allowed, encouraged, and sometimes even ordered to employ overhead shackles, dogs, sleep and sensory deprivation, enemas, drugs, and beatings. Looking at these amiable American sadists, it is hard not to think of the infamous Milgrom experiments in obedience (referred to in Gibney’s previous film, Enron: The Smartest Guys in the Room), in which undergraduates followed commands to inflict pain on a stranger.

“It is a mean, nasty, dirty business out there,” says Cheney. Taxi to the Dark Side demonstrates that it is also in here, in the terrible way that the “War on Terror” is waged. The film shows that transforming American recruits into torturers is more effective at making enemies than extracting reliable confessions. “Give them clear standards of conduct that reflect the ideals they risk their lives for,” John McCain, a survivor of torture, tells a Senate committee. It is wisdom endorsed by this important film but not by McCain who, on February 13, voted against a bill that would have outlawed procedures not permitted by the Army Field Manual. The taxi meter is still running. •

As of press time, Taxi to the Dark Side will be opening at the Santikos Bijou at Crossroads on March 28.