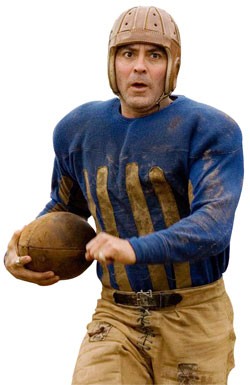 
A good comedy is one that makes you laugh, a great comedy is one that beckons you to re-watch it immediately and laugh at the same things again, and a classic comedy is one that keeps you coming back year after year. Leatherheads is definitely a good comedy, it has the makings of a great comedy, and only posterity will know if it will be deemed a classic. I realize this is a strong endorsement for a film that I’ve just met, but sometimes you just know. Either that, or it’s just that I would rather see Leatherheads five more times this month than even imagine seeing Scary Epic Date Movie 34b: I Still Know Who You’re Dating this Summer.

The year is 1925, college football is king and the king of college football is Carter Rutherford of Princeton (Krasinski), a clean-cut, high-class, Ivy League lawyer-in-waiting who is a war hero to boot. Meanwhile, professional football is not so much played as brawled by working-class stiffs in cow pastures and the king of the brawlers is Dodge
Connolly (Clooney), an unscrupulous old salt who dictates his own good press clippings to his befuddled reporter friend Suds (the hilarious Stephen Root).

Enter the dame. She’s a reporter (it’s always a reporter) named Lexie Littleton (the less hilarious Zellweger) sent by the Chicago Tribune to build up Carter and then kneecap him by revealing that he’s not a war hero after all. Meanwhile, with professional football all but buried and forgotten, Dodge does his best to convince Carter and his agent CC Frazier (the wickedly bemused Jonathan Pryce) to save the league. So there you have it: a solid plot mechanism, a conflict, a love triangle, and complications arising from conflicted loyalties and journalistic integrity. Throw in an offbeat cast of characters, the motley underdog team from Duluth, some zippy music (by Randy Newman, no less), zany situations (speakeasies are always a fun choice), a couple of wacky chase scenes, and some scenes of football in the mud and you have a rich, hearty comedy stew.

Clooney (and his director of photography, Newton Sigel) take loving care with each frame and the result is a visually opulent film that could serve as a model for future directors who might benefit from a lesson in timing and classic visual storytelling. Leatherheads is not merely an homage to old-school comedy, it’s proof that you can still make one like they used to. Clearly these folks know how to put together a set-piece in a context of interesting characters and consistency. They don’t wink and nudge, they don’t condescend, they just tell a good story.

Comparisons to Cary Grant and Clark Gable (among others) are just and in no way demeaning to those icons: Clooney is certainly worthy of their company. He’s got the charm, the looks, the quick wit, and (this is the best part) he’s alive. The supporting players hold their own and usually go one better (like Heather Goldenhersh’s flapper, or Wayne Duvall’s coach) and even characters who never speak a word have great moments.

If you’re looking for deep social satire here then you’re barking up the wrong tree. This isn’t Good Night and Good Luck, and it shouldn’t be. If you’re looking to see a real 1930s movie, then get yourself one of those. But if you’re looking for a well-crafted consistent comedy, or even if all you want is a good laugh or two (or 10), then Leatherheads will be good to you. And in the long run, it might even be good for you. •