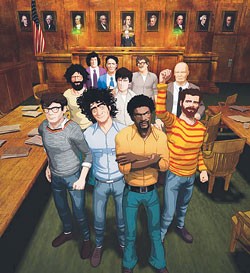 
Throughout the fall of 1969, eight anti-war activists — David Dellinger, Rennie Davis, John Froines, Tom Hayden, Abbie Hoffman, Bobby Seale, Jerry Rubin, and Lee Weiner — stood accused of inciting a riot during the Democratic National Convention in Chicago. Though their trial became a memorable episode of the tumultuous 1960s, most people alive now, 40 years later, lack any direct memory of it. Chicago 10, a dramatized documentary whose title includes the two defense lawyers, William Kunstler and Leonard Weinglass, in its computation, mixes memory with melodrama. Cutting between an animated rendition of the trial itself and footage from four days of protest and violent overreaction in August 1968, director Brett Morgen immerses us, without context or catharsis, in the turbulence of streets and courtroom.

The disparate defendants included leaders of the National Mobilization Committee to End the War in Vietnam as well as antic Yippies who regarded political action as playful agitprop. Only tangentially involved in the demonstrations, Seale, co-founder of the Black Panthers, was bound, gagged, and beaten during the trial. The harsh sentences that Judge Julius Hoffman, a biased buffoon, imposed were eventually overturned.

“It’s all conceived as a total theater, with everyone as an actor,” explains Abby Hoffman about the protests planned in Mayor Richard J. Dailey’s Chicago, which Walter Cronkite calls “a police state.” In that theater, Hoffman, gloating over his own celebrity (“Bigger than the Stones!” he exults) stands out, more than the thousands of lives lost to an ill-conceived conflict and thousands more striving to put an end to war. At the end of this riveting film, the score is Chicago: 10 and Understanding (of the peace movement and American politics): 2.