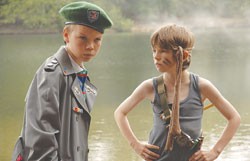 
As a self-confessed movie geek who squan-dered far too much of his childhood in the shelter of a darkened movie theater, I’m predisposed to identify with a story about boyish film obsession. I only wish that this particular movie was more worthy of obsession.

Son of Rambow is a fitfully charming and engaging little romp, but it’s not likely to inspire anyone to the frenzied heights of passion displayed by the movie’s kid heroes.

The stars are a mismatched outcast duo, united by imagination and a dearth of good male role models. With his radar-dish ears and shaggy auburn mop top, Bill Milner evokes Lucas Haas in Witness as Will Proudfoot, a terribly shy daydreamer hemmed in by his austere, cultish, religious family. His opposite is Lee Carter (Will Poulter), a towheaded terror with few rules, since his wealthy absentee parents spend most of their time tramping about Europe without him. For very different reasons the two spend a lot of time outside the principal’s office in their very British, 1980s suburban grammar school. A bond is quickly formed over a bootleg videotape of Stallone’s macho classic First Blood, and a plan is put in place to make a homemade sequel, since Will has a sketchbook full of storyboards and Lee has a fancy new video camera.

They spend many blissful afternoons staging bloody battles and rigging up elaborate stunts that border on life-threatening. All of this is to win a BBC-sponsored young filmmakers’ competition, a goal they are as intent upon as Rambo was about liberating MIAs. This convivial harmony is disrupted by the arrival of cool French exchange student Didier (Jules Sitruk), who dresses like a refugee from a Culture Club video. Soon this foreign invader has elbowed his way into the production, casting himself as super warrior “The Wolf” and recruiting all the cool kids to play ninjas and other bit parts. None of this sits well with Lee, who feels betrayed and rejected, and begins to revolt.

The film is the second effort of the Hammer & Tongs team of director Garth Jennings and producer Nick Goldsmith, who previously made a visually exciting, tonally erratic mess of The Hitchhiker’s Guide to the Galaxy. Their quirky handcrafted effects and overlaid animated scribbles are reminiscent of Michel Gondry’s work, though they use them a little more sparingly.

As neat as the visuals are, the tone is still sloppy, wobbling from whimsy to drama. Jessica Hynes (Spaced) does her level best as Will’s widowed mother, struggling between love for her son and the firm yoke of her religion, which forbids modern nonsense like movies and TV, but her scenes seem terminally underdeveloped. Just like the lads, Jennings simply can’t wait to ditch the doldrums and get back to the fun of pure moviemaking. •