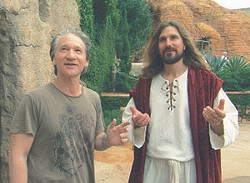 
Heaven knows, the world could stand to take a good, hard look at its track record of integrating religious faith and earthly affairs.

But would you expect that thoughtful analysis to come from Larry Charles, the man who directed Borat?

No, you would not — nor would ask Bill
Maher, the insufferably smug comic-pundit whose attitude can make even his most well-reasoned arguments infuriating, to host the thing. As it stands, the only people likely to see Religulous are those who already mostly buy Maher’s premise that religion is “detrimental to the progress of humanity” and that “the plain fact is, religion must die for mankind to live.” Those viewers will have their prejudices confirmed, but aside from a few scraps of trivia, they won’t walk out knowing any more about religion than they did going in.

Of course, Religulous is a comedy, not a PBS investigation. Bill Maher is no Bill Moyers, so we expect him to crack jokes about his interview subjects, take cheap shots at their malapropisms, and obsess over the most extreme examples of faith run amok instead of trying to understand what makes the vast population of everyday believers tick. But Maher claims to take his subject so seriously — at one point literally standing on the site where some believe Jesus will return to Earth and warning that the continued existence of conventional faith will lead to Armageddon — that his flippancy makes little sense.

When he isn’t scaremongering, Maher is touring the freak-show corners of faith. He visits a museum with “educational” exhibits showing dinosaurs and humans living side by side, interrogates an actor who plays Jesus at a Holy Land theme park in Florida, and does the obligatory Q&A with a man who tries to “cure” homosexuals of their forbidden desires.

But condemning the whole of religion for examples like these is like damning romantic love because it sometimes makes an astronaut drive cross-country wearing diapers. Mocking these fringe characters is too easy, not at all enlightening, and — an unforgivable sin for a comedian — seriously old hat. (Has Maher never seen The Daily Show, which routinely tackles these oddballs with more wit and nerve?)

In a couple of interviews, Maher finds intriguing subjects (a Christian genome-project scientist, a hugely unorthodox Vatican priest) whose opinions might make some people wonder if it’s possible for faith and logic to live side by side. Maher isn’t interested in exploring the beliefs of smart people, though, and quickly moves on to the next goofball. (Christians, take heart: The film eventually gets around to denouncing Judaism and Islam as well.)

Along the way, Religulous earns plenty of minor chuckles and gets in some slivers of intelligent critique regarding the inconsistencies and perversions that have plagued religion through the ages, but both are diminished by the movie’s overall spirit.

At one point, the host refers to what he describes as “the arrogant certitude that is the hallmark of religion.” Some would say that’s the pot calling the kettle black. Churchgoers might offer to help Maher get the two-by-four out of his own eye while he picks at the splinters in theirs. •