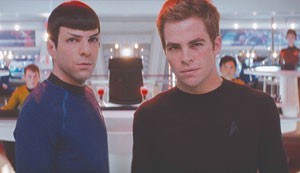 
The moment Zachary Quinto (the evil Sylar from NBC’s Heroes) was cast as Spock, fans had every reason to believe this reboot would successfully relaunch the franchise. The Star Trek universe deserves so much better than the weak UPN Enterprise series that was mercifully canceled in 2005 after four seasons. Quinto just emanates the Vulcan vibe. Chris Pine comes through ably as Kirk, Zoe Saldana lights up the screen as Uhura — the entire cast is superb. But it’s Quinto’s dynamic portrayal of one of the most iconic characters in sci-fi history that cements the new Star Trek as among the best films released so far this year.

Director J.J. Abrams (the creator of Lost) wasn’t even a serious Trekkie, but he realized that the relationship between Kirk and Spock is the fulcrum of the Trek universe, and he wisely shaped his mind-bending story around it. This dynamic will hook longtime fans from the start, but the film is set up to work just fine even if you don’t know a a tribble from a tricorder.

Fans have long wondered what the characters might have been like as young adults making their way through Starfleet Academy, and Abrams gives us a little peek, along with a bit of the young Kirk carousing in his native Iowa. Watching the original crew meet for the first time is a hoot, but it isn’t long before an intergalactic emergency calls the young team on the U.S.S. Enterprise into space action.

The film offers plenty of warp-speed thrills, hand-to-hand combat, and high drama, but unlike so many summer blockbusters — mostly sizzle with little substance — Star Trek is constructed on an emotional foundation that’s even more compelling than its action sequences. Leonard Nimoy even reprises his seminal role as the aging Spock, and his left-field appearance spins the story off in a strange new direction.

Series creator Gene Roddenberry tapped into a vision of a future where humanity has united to become such a galactic player that Starfleet HQ for the entire galaxy is based in San Francisco. This utopian vision was the foundation for the entire franchise. The new flick doesn’t go too overtly into these sociopolitical themes, but the undertones are there at what seems a crucial time for our struggling society, with the sequels (the core cast is signed on for at least two more films) promising to delve deeper into the social issues explored in the original series. Roddenberry is surely smiling down from the heavens at the way his beloved creation has been revitalized at a time when his vision is needed more than ever.