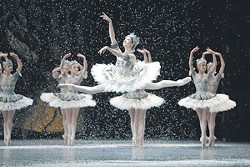 
Its generic title makes La Danse sound like one of those bland filmic celebrations of the Timeless Beauty of a performing art that only well-heeled retirees and kids at Christmastime get to see live. But director Frederick Wiseman doesn’t do bland celebrations. His last film, State Legislature, examined the Idaho government for 217 minutes. Back in the 1960s, he made his name with shocking explorations of schools, mental hospitals, and other sputtering American institutions.

His subject here — the Paris Opera Ballet housed in the opulent Palais Garnier — is way prettier. But Wiseman downplays the glamour. We don’t see the opera house’s acres of marble or its stunning Chagall ceiling mural till late in the film. And when we do, it’s because the camera is following a janitor who’s vacuuming the damask boxes after a show.

Instead, Wiseman takes us directly into the rehearsal spaces. Great dancers, it’s often said, give the impression of doing what they do effortlessly. But here we see how much thought, practice, and even nagging go into every arabesque or temps relevé. In the words of Brigitte Lefèvre, the ballet’s imposing director, a ballerina has to be a combination of “boxer and nun.”

But personal devotion to the craft doesn’t exist in a vacuum. One of the film’s most fascinating aspects — aside from the actual dancing — is the coaches’ and choreographers’ off-the-cuff comments. “She doesn’t bend,” one teacher murmurs to another, watching a pas de deux. “That looks almost indecently easy,” says another as a dancer launches himself into the air.

Wiseman rejects the terms “cinéma vérité” and “fly on the wall” for his method, pointing out that flies on the wall don’t shoot and shape hundreds of hours of footage. Still, watching La Danse does feel like flitting ghost-like around the Opera and eavesdropping in its practice rooms, cafeteria, craft workshops, and business offices (where we learn about the dancers’ retirement plans and how Lefèvre coaxes donations from wealthy Americans). The subjects never talk to the camera or acknowledge its presence. While the French dialogue is subtitled, no captions on the screen tell us whom or what we’re seeing.

This can be frustrating for viewers not familiar with the dancers, choreographers, and ballets involved. One of the works in rehearsal, The Nutcracker, is unmistakable; others, mostly modern works, are more obscure.

They’re mesmerizing, though. The film has one heart-stopping moment in a dress rehearsal of Angelin Preljocaj’s Le Songe de Médée, in which Medea (Delphine Moussin) murders her children and smears herself with blood. Filmed from the edge of the stage, it’s a horror-movie scene raised to the level of surreal poetry.

Earlier in La Danse, we watch a coach talking another dancer through the acting of this scene, dissecting all the meanings she could give a single gesture. When we see Moussin perform that same gesture onstage, and its emotional resonance hits us, we have a sense of potential realized, of art in action.

Ballet may seem like a fusty old warhorse to some. But in front of Wiseman’s camera, it’s almost indecently alive. •