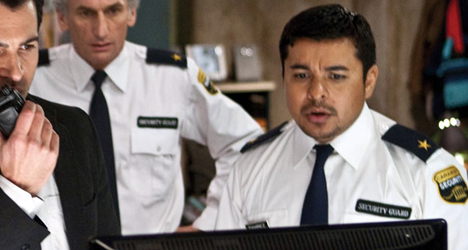 I was in college the first time I saw The Exorcist. The year was 1998 and it had been 25 years since Linda Blair first upchucked pea soup on the big screen, so I was a bit behind when it came to the horror genre. I wasn’t even born when the movie debuted in 1973, but growing up I remember my more courageous cousins talking about how scary it was. One even told me the devil himself lived in the VHS tape. That was enough for me to stay as far away as possible from the VCR during Exorcist screenings.

I was a worrywart kid, so anything that had the possibility of giving me nightmares for a month was not something I wanted to have any part of. Even The Twilight Zone theme song terrified the hell out of me. I had to sleep with a nightlight. My closet doors always had to be closed. I was the kind of kid you’d find playing Hungry Hungry Hippos with my younger cousins while the older ones fucked around with the Ouija board in the back room. I was the one who stuck his head under the pillows during sleepovers when stories of the Donkey Lady, Bloody Mary, and the chicken-footed devil dancing at a local bar in the 70s were retold. If I woke up in the middle of the night and had to go to the bathroom, I would sing “Jesus Loves Me” while I walked down the dark hallway just in case something was lurking in the shadows ready to grab me. It was always the fear I created in my own mind that made things worse than they really were. Actor Jacob Vargas feels the same way.

“It’s when you use your own imagination when things start to get scary,” Vargas, 39, told me during a phone interview to promote his new movie Devil. “Everyone has their own idea about what is terrifying to them.” In Devil, a group of people find themselves trapped in an elevator and fighting to survive when they learn Satan may be among them. Vargas plays Ramirez, a religious security guard who watches the eerie events unfold in the elevator from monitors in the building’s security office. During our interview, Vargas, who has starred in such movies as Selena, Traffic, and Death Race, talked to me about a supernatural experience he had as a kid and how he reacted when he was once stuck in an elevator for almost half an hour.

What do you think makes a good scary movie? I love a good supernatural thriller. Movies where there is something unknown like The Omen and The Seventh Sign really scare me. This movie is right up my alley. That’s what Devil does. It lets you create your own fear. Have you ever been scared by something supernatural? Yeah, I saw a ghost once when I was a kid. I fell asleep watching movies I wasn’t supposed to see. It was when cable first came out. When I woke up I looked to my right and saw a man sitting on the couch. He was a ghostly figure. I couldn’t move and nothing came out of my mouth. He put his finger over his mouth making a gesture to be quiet and then he disappeared. It freaked me out. Once he was gone, I screamed my head off and woke up everyone in the house.

The devil himself is a major part of Mexican folklore. Your family is from Michoacan. Do you remember any legends you were told as a kid? Yeah, my dad would tell me a story about living on a rancho in Michoacan near Las Guacamayas. If you know about Las Guacamayas, you know that nothing good can come out of that place. He told me there was a treasure around there that allegedly belonged to [Hernan] Cortes, but it was protected by dogs. He told me he went to go look for the treasure once and he saw one of the dogs and the dog looked at him and then stood on his hind legs and started walking like a human being towards him. It scared the hell out of him and he took off and never went back. They say the devil can take many different forms, so when he told me that it scared the crap out of me.

What do you do when you get scared? We see you praying in Spanish at one point in the movie. I grew up in a very religious family. I grew up going to church and doing catechism and first communion. What’s interesting is even though I speak English now, whenever I get freaked out or I pray I do it in Spanish. It just comes naturally. When I was shooting the movie I had to get in a really dark place. For whatever reason, I felt compelled to start praying in Spanish. It gave me some comfort.

Have you ever been stuck in an elevator like the characters in Devil? I have actually gotten stuck in an elevator. I was at a comedy show at a hotel. We were on the top floor so everyone had to take the elevator down. Everyone was totally drunk. They packed the elevator with too many people and we got stuck for about 25 minutes. The first five minutes are funny and people are cracking jokes, but as time went on people start freaking out, girls start crying, it starts getting hot, people start turning on each other. It was really fascinating to see how people were at each other’s throats in 25 minutes. I was kind of calm for a while, but then I started freaking out, too. I think it was more of the energy that was in there that made me freak out.

In the film, all the security officers react to the events happening in the elevator as they watch the security monitors. What did you have to imagine you were looking at to create that sense of fear? I imagined I was watching the Governor of Arizona pass SB 1070 (anti-immigration Senate bill).