The Ballad of Mike Yuchnitz 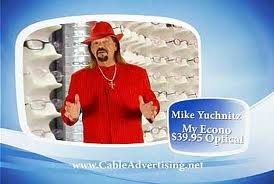 Local celebrities, as it goes in the pantheon of pop culture, are probably right at the bottom

There have been a select few from my childhood that stand out to this day.

The first was Commander K.O. (the one that looked like ace reporter April O’Neil from the Teenage Mutant Ninja Turtles). Coincidentally, the next Commander K.O. is now a real reporter, though her "aceness" has yet to be determined.

I remember the Alamo Heat, from a DARE concert where we were told to "stay off drugs" in between songs that were clearly influenced by drugs.

I remember quite fondly Randy Beamer’s moustache, or as my friend Larry Garza calls it, "the Beamer."

But most of all I remember Mike Yuchnitz.

In between wrestling bouts featuring Bret "the Hit Man" Hart and perennial loser "the Brooklyn Brawler" I would see this tubby round man with a fuzzy beard tell me his life story, ethics, and eyeglass frames in the span of a minute.

His back was strait anchoring wild arms as they tried in vain to convey "come on in" while his shirt fought valiantly to stay tucked under his portly belly.

Every commercial was laced by his barren monotone voice

never once trying to pretend any inflection. Mike Yuchnitz told it to you strait. He was like the Micro Machines guy on opium and diabetes, begging to "take care of you."

Ballsy is the man who names his business after the price of his glasses. Knowing that no matter how good or how bad the economy was, they would be $39.95. It’s in the name!

In the years I grew up gas went from “Let’s go to Austin” to “let’s just skip Austin” to “I think Austin just raped me” to "You know, Austin’s over rated anyways.” But in all the ups and downs of the American economy I knew of only two constants.

Strippers would show you their breasts for a dollar and Mike Yuchnitz would let you see them clearly for $39.95.

Then the rumors of Yuchnitz eccentricities would surface. I’d hear he drove a limo about town (I have no idea if this is true), the wild parties for his son with lots of drugs, booze, and music (This I know is true

I don’t know when it happened, but I remember being drunk watching Judge Mathis late at night. In between commercial breaks telling me to thank Career Point and consolidate my debt I saw this man with long greasy hair hawking glasses, tattoos and piercings?

Mike Yuchnitz went Scarface on me!

I’d love to see the evolutionary chart of the Yuchnitz. What started as a guy whose fashion sense bordered between high school shop teacher and manager of Denny’s

somehow evolved into a Hasidic Pimp in a red polyester suit. The gold crucifix and chains dangling under his neck jowls seemed like they were lifted from a Cuban Mr. T impersonator, while the bags under his eyes clearly showed the signs of too many late nights at the strip club.

With probably the greatest aspect of his makeover, was the fact that his voice was still in that barren monotone drawl.

What kind of power play does it take for a man to change so drastically?

The truth is, it wasn’t so drastic. This evolution was over the course of 20 years. Mike Yuchnitz went from small business man providing vision to low income families, to piercing and tattooing strippers in between bumps and lap dances.

I think that’s why people’s initial reactions when news of his arrest for attempting to hire a hit man (not Bret Hart) to kill his wife came not so much as a shock, but as the funniest thing they have ever heard. We all witnessed a man come from humble beginnings, get success, and turn into a drug-addled looking scumbag.

Then we got the pleasure to Facebook it around the world! (Or at least 1604.)

In 1887, noted English historian Lord Acton wrote what was universally true then as much as it is today: "Power tends to corrupt, and absolute power corrupts absolutely. Great men are almost always bad men."

Everyone with a TV in San Antonio got to witness this for themselves. Just in time for Halloween too! I couldn’t count how many times I saw people dressed as Pimp Yuchnitz brandishing knives and saying "trick or we’ll take care of ya." (OK, one.)

Who knows how this horrible mess may turn out? Is he guilty? (Probably.) Will he plead out? Will strip malls in bad areas of town have one less occupancy? I don’t know.

they just may be a little fuzzy, that's all.