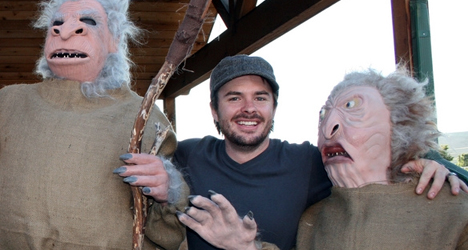 It had been a year and a half since 10-year-old actor Michael Paul Stephenson had starred in the very first movie of his young career. Goblins, the title it held during its production, featured vegetarian goblins that turned people into plants so they could eat them. When the movie wrapped, Stephenson wondered how he would embrace his newfound stardom. He thought he had just made the next Gremlins or Labyrinth. “I thought, ‘Okay, a couple of weeks from now we’ll go to the local Cineplex and watch my movie,’” Stephenson, 32, told me during a phone interview. “But that never happened.” Instead, months passed without a peep from anyone about the movie's status. It wasn’t until Christmas morning in 1990 when Stephenson finally got to see his movie for the very first time.

“I was unwrapping presents and one of the last presents I unwrapped was a VHS tape,” Stephenson said. “It was a movie called Troll 2. I remember just looking at the tape and thinking, ‘What is this?’ My mom said, ‘Michael, it’s your movie! Let’s put it in!’” In an attempt to cash in on 1986’s original Troll, the studio decided to change the title to Troll 2, although the two movies have absolutely no connection.

“So, I took out the movie and stuck it in the VHS player,” Stephenson said.  “I remember maybe halfway into it my dad put his hands on his head and said, “Ugh, Michael, this is a terrible movie!’ From that moment on, I was embarrassed by Troll 2 and what it was.” As embarrassed as he may have been, Stephenson has turned his somewhat traumatizing experience as a child actor into something he can definitely be proud of. While many people consider Troll 2 the worst movie ever made (for a while it held that title on imdb.com), the horror comedy has since reached cult status across the world.

In his documentary Best Worst Movie, Stephenson follows the unexpected phenomenon that is Troll 2 through interviews with cast and crew members, visits to Troll 2 midnight screenings, and a very in-depth look into why so many people cherish a movie as “genuinely awful” as the one he starred in 20 years ago. Best Worst Movie is available on DVD Nov. 16. I thought my middle school years were rough. Did this movie haunt you for your entire adolescence?

It never went away! It was always on late-night cable television. I had this one uncle who would call me every time it was on and say, “Michael, your crappy movie is on again!” Even when I continued to act in other parts, I thought maybe the next movie would be the one that would finally make everyone forget about Troll 2. It never happened that way. Troll 2 just continued to have this strange and inexplicable will to live. There is really a fine line between the opinions people have about Troll 2. Some people do consider it the worst movie ever made, but in Best Worst Movie you also talk to people who think it is genius. Is there even a way to distinguish between opinions anymore?

I don’t even know if I could tell you that Troll 2 is a bad movie anymore. That’s how much this whole process [of making the documentary] has messed me up. There are way worse movies that are made out there. I think the worst thing you can do as a director is to fail to entertain. [Director] Claudio [Fragasso] did not do that with Troll 2. He swung for the fences. Even though it failed in every way – acting, writing, directing, special effects – it hasn’t failed to entertain. Ironically, I think Best Worst Movie puts Troll 2 in a different light. It gave it a little more meaning. You see people that will argue vehemently that Troll 2 isn’t a bad movie. I think that kind of raised it from being the No. 1 worst movie on imdb.com up. (Currently, it sits comfortably at No. 59 worst movie). But, again, Troll 2 is definitely not the worst movie ever made. There are movies out there that I’ve watched that made me want to pull my eyeballs out.

Can you give me an example? Man, well, I think a movie like Transformers 2 is worse than Troll 2. Movies like that just fail to have any kind of lasting impression. They fail to leave any positive memories. I can’t even imagine how many times you’ve seen Troll 2. Do you still consider it a bad movie or is it kind of hard to hate since it’s now a part of who you are?

I think that’s one of the things that came out of the film. What is bad? Bad is relative. I think at the end the most important thing for a movie to do is leave you with a positive memory. Troll 2 does that. You can argue in terms of all the things Troll 2 does wrong, but on the other side Troll 2 is a film that 100 years from now people will still remember. People will still smile and still laugh regardless whether it was intended or not. It has left an impression. As Claudio says in Best Worst Movie, making one of the worst movies ever made is almost as good as making the best because you left an impression. I think a movie is meant to be a personal experience. Troll 2 is a very good example of that. I think whether it’s bad or good is irrelevant. It’s the same thing with art. I don’t want to sound overly pretentious, but people will look at a piece of art and say, “It’s genius!” and then another person will come along and say, “My three year old could have done that.” When there’s so much crap out there and so much utterly forgettable stuff, to have something that cuts through all that and leave you with a memory, that’s an accomplishment. I really think that’s something Claudio can really be proud of. Think of how difficult it probably was for him to make Troll 2 in the first place. He couldn’t speak English. He was working with actors that couldn’t act. He ended up in small-town Utah making a hellacious film about vegetarian goblins, and somehow he got it made. Somehow all these years later there are people that are celebrating it, because it's genuinely awful.

Claudio doesn’t think it’s awful. In some scenes of Best Worst Movie you show him very confused in trying to understand what Troll 2 has evolved into over the years. Do you think he finally got it at the end? He’s never going to say it’s awful. He’s a modern day Ed Wood. He stands by the film. I think throughout the film you see him process that. You see that maybe he realizes it's not what he thought it was, but still there is that feeling that everyone is showing up to see his movie at a sold out screening. That type of appeal is undeniable. Troll 2 is the film it is because of the decisions he made. Some were bad, some were good, and some were unintentional. Regardless, it happened because of him.

Some of the scenes where we watch him process his thoughts are uncomfortable to watch because it’s almost like he’s realizing all his faults as a filmmaker. Was it as uncomfortable on the set as it was watching it? I wouldn’t say that I was uncomfortable because at that stage I’m the filmmaker so I thought it was exciting. It was reality. It was how he felt and we were recording it. Claudio is a very passionate person. He one of these guys that would punch you and the next moment buy you a beer. I knew that he was upset and thought all the actors were “dogs,” but moments later you see him holding his film reel for the first time and talking about how he had never held the reel before and how special it was for him. He’s not black and white. There’s a level of respectability and likeability even amongst some of the dysfunction and discomfort.

If Claudio asked you to return and complete the trilogy, would you do it? Oh, man, I would do it in a heartbeat. We could talk for hours about why it’s right and why it’s wrong. It’s one of those things that if Claudio was able to do it and George [Hardy] (who played Stephenson's father in Troll 2) came on board, I don’t know how I could not support it. You could never set out to make a movie like Troll 2. There is a little part of me that thinks anything after Troll 2 would be unnecessary. Through all of this, Best Worst Movie feels like the perfect bookend for me. But I don’t know if I could say no...even if it ended up being the second worst movie ever made.