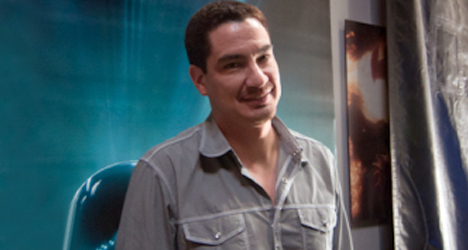 When the original TRON was released in 1982, it was a groundbreaking moment for visual effects in movies. Now, TRON: Legacy is making the same sort of impact on the industry its predecessor did 28 years ago.

Leading the charge into the new and improved digital grid in TRON: Legacy is visual effects supervisor Eric Barba. Barba, who is employed with Digital Domain, has worked in the visual effects department for the company is some capacity since 1994.

Over the last 16 years, Barba’s credits have included The Fifth Element, Supernova, and Zodiac. In 2008, he won an Academy Award for his work on David Fincher’s fantasy drama The Curious Case of Benjamin Button. In the film, Barba helped digitize Brad Pitt, who played a man with a disease that caused him to age backwards.

During an interview with me, Barba talked about using some of the same Benjamin Button techniques in TRON: Legacy and what he thinks about possibly winning another Oscar come February.

What are some of the first steps you have to take to update the original special effects into this sequel?

Do you feel more pressure when you are working on a film like TRON: Legacy because it is so dependent on special effects?

There is definitely a lot of pressure. This was the longest I had ever worked on a film. I spent about two years working on The Curious Case of Benjamin Button and about two and a half years working on this one. There were a lot of things we had to pull off with all these computer-generated effects and the 3-D effects. We wanted to make it for a modern audience.

The special effect that has been most talked about is the “de-aging” process you use to make actor Jeff Bridges look 20 years younger. Is there still room to improve on this specific technique?

This particular technique was one we used on The Curious Case of Benjamin Button. We used as much of the knowledge we could from that one in this film. There is plenty of room for improvement, trust me. Most of the challenges we faced on this film were technical challenges. It was sometimes very daunting. But technology is going to get better and better.

So, can you understand why TRON: Legacy director Joseph Kosinski was quoted as saying the “de-aging” technique is not “at 100 percent in 100 percent of the shots?”

That’s funny because immediately after that quote came out, he sent me and email and said he was misquoted. I’m taking his word on it. I think as artists we always want to work on something and improve on it before it makes it to the big screen. That’s just the nature of who we are. But we are on a schedule and a budget so there comes a time when we have to stop and ship the product off.

Thirty years from now what do you think people are going to be saying about the special effects in TRON: Legacy?

Wow, well, the thing is if your movie has a big budget you’ve hopefully hired the best people you can find. Digital effects aren’t cheap especially when you try to break ground. I hope, much like the original film, audiences will get a full experience and it will be less about visual effects and more about story.

There was an article that just came out in Popular Mechanics that questions whether technology helps or hurts the film industry. What are your thoughts on what you do as an artist effecting cinema as a whole?

I think it’s my job as a visual effects supervisor to help tell the story that the director wants to show on the big screen. At the end of the day we’re here to serve the director and the storyteller.

Do you think movies like TRON: Legacy can shape what other movie studios do in the future?

It depends on what you mean by "TRON." If you mean more action/adventure films, then we might see more of those. If you mean something more TRON-specific, I think if this movie does well at the box office I’m sure they would love to make another one. It’s always a goal to get a franchise going. If you mean more 3-D movies, then I think the industry will get better and better as a whole. If studios shoot 3-D correctly, it can be a great experience for moviegoers. I think TRON: Legacy can be the leader in all of that.

You’re on the short list for another Oscar nomination for your work on TRON: Legacy. Are getting accolades like this something you aim for when you're choosing your next project?

You never know how your work is going to be accepted. I don’t think about awards, I just try to put the best product out there that I can. It’s up to whoever judges those things to say if it’s Oscar worthy.