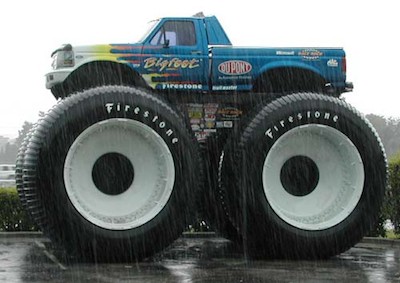 A couple weeks ago I used my clout as Arts Writer at The Current to tell a story about how rodeo might be performance art--but no--it's more like opera. Classical stuff.

A few days later, I found myself in the neighborhood of Houston, checking out a few galleries. Houston is only in the neighborhood if you think 5+ hours driving up and down  I-10 from San Antonio is local fun, which I do. Or maybe it really is a big trip, but  worth the effort for the sake of the jerky at Buc-ee's truck stop halfway down the pike, or the country music on the radio somewhere around Shiner. My favorite lyrics that day were by Dub Miller, " I live out  on the highway between insanity and Texas..." Eventually I reached the Bayou City.

An intern at one of the galleries  had  news to share. She had just been to her first monster truck rally. With an academic  grounding in fine art, though a little vague on  various  details of American pop culture, she had some insights into the sport that paralleled my own rodeo investigations.

Not yet having attended a monster truck event myself, I had to trust my informant's story, with a few questions thrown in to attain clarity.

It seems that the monster trucks, big affairs with huge, huge wheels that run over things and make a lot of noise, are something like an American take on manga ??, Japanese comic books, and anime ???,  manga's TV cartoon spinoff, also called Japanation. Instead of big eyes, the trucks have big tires.

"They're cute," I was told, "They look like Tonka Toys, and sitting in the  bleachers of the stadium where they had the rally, you could  just reach out and grab them."

"Excuse me," I asked, "do you mean they appeared to be  close enough to grab?"

"No, you really could have done so" my informant replied, "they were just the size of toys. Small ones. Like Tonka Toys."

This is where art theory comes in handy. Apparently, monster trucks seem to be really  monstrous--hence the name--when you get up close, but that's just a trick of weird perspective. Usually, things look smaller  the farther away they are, but we can, certainly, tell their real size when nearby. With monster trucks, it's the other way around. They really are small, just as they appear in the rally stands. They just look big in certain contexts.

"You could just reach out and grab one,"  she kept insisting.

No wonder this is a popular sport! Not only do these things do special stuff with scale, just like transformers (Japanese, again) that start out small and--bang!--grow huge (except the trucks do the trick in reverse), they mess with other properties of  space as well.  Follow the logic of the situation and you'll see the real appeal here.

Since monster trucks are in fact really small and grabbable, just like they  seem to be in the bleachers, it follows that all those  people in the stadium with you must be pretty close, too. It's a miracle of intimacy--thousands of people  only a few feet away.

My informant assured me that was, indeed, the case. Though I didn't share her experience, I am sure  she was telling a truth. — Scott Andrews