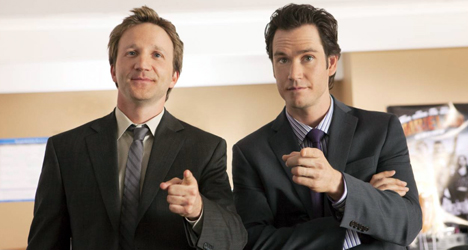 While they admit to not being nearly as cocky as their title characters in the new TV series Franklin & Bash on TNT, actors Breckin Meyer (Road Trip) and Mark-Paul Gosselaar (TV's Saved by the Bell) are looking forward to a debut season where they can let loose and have a little fun.

In Franklin & Bash, Meyer and Gosselaar play Jared Franklin and Peter Bash, two lifelong friends and lawyers who take their unconventional courtroom practices to a new law firm to prove they would do anything for their clients.

During an exclusive interview with me, Meyer and Gosselaar talked about what caught their attention from the show’s script and how the TV industry has changed over the last few years.

Franklin & Bash airs every Wednesday at 8 p.m. on TNT.

Would you say there’s a little “bromance” brewing between your characters in Franklin & Bash or has the term been overused already?

Mark-Paul Gosselaar: If that’s what it takes for viewers to watch, I guess we’ll accept that cute little moniker. But it’s more than a “bromance.” What separates this show from others in the legal genre is that here the legal aspect of the show is just a catalyst to allow us to look into these characters and who these guys really are.

Normally, when you see two male characters in a TV series they tend to be polar opposites – like another version of The Odd Couple. But it seems like the two of you are cut from the same cloth. How did that dynamic work out?

Breckin Meyer: I think one of the things I responded to the script when I initially read it was that it wasn’t set up as The Odd Couple in a law firm. They are both funny guys. They both have an unorthodox approach in the courtroom, but they are different. To me, that just made it more layered as a character piece.

How close are the both of you to these confident, cocky characters you play on this show?

MPG: I’m much more reserved and private. I’m not as confident or cocky at all. That’s why it’s so much fun to play these characters because what we’re trying to constantly do on this show is keep it as realistic as possible.

BM: Yeah, Jared definitely has more moxie than I do. He likes to stick it to authority more than I do. That’s part of the fun playing him.

How has taking on a TV role changed over the years? The TV industry isn’t the little brother of the film industry anymore. It seems like everyone wants to be a part of a series now.

BM: I think the line between TV and film has definitely blurred in a good way. You can jump between both now. For me Franklin & Bash was the best thing I had read in a while and I wanted to do it. The fact that it was TV had little to do with it.

In real life, lawyers are not usually met with great admiration. Why do you think the occupation gets such a bad rap all the time?

MPG: I think lawyers are usually synonymous with bad times. You don’t really need a lawyer until shit happens. I don’t know if all lawyers are bad, but they’re usually around for bad times.

Do either of you have a lawyer’s number in your cell phone right now?

BM: I actually do have a lawyer’s number in my cell phone. It’s not a criminal lawyer. If you’re thinking about committing a crime, I’d say jot a lawyers name down.

You both have been on TV shows that have been cancelled. Even though the quality of TV has changed for the better over the last few years, is the TV industry still as unpredictable as ever?

BM: It may be a little more cutthroat now, but it’s always been this way. It’s always been a gypsy lifestyle for an actor. There are so many variables that are out of your control when you’re doing a show. As an actor you get the job, say the words and hopefully connect with the audience. This is a show with a rare combination of actors, producers, writers, and guest stars all coming together and really having a blast. Hopefully, that translates to the screen.