Many of our parents and grandparents were taught as Hispanics growing up in South Texas, “If you want to prosper in the U.S., do not speak Spanish, do not teach your children Spanish.” Fortunately, times they have a-changed; parents can and should teach their children more about their culture. I met with mother-of-two and owner of Baby Besos, Victoria Herrera, who built a business that teaches other children and her own about being Latino with fashion and other child-friendly tools.

“After I had my second child, I realized I wanted my children to love and understand Spanish the way I love it,” explains Herrera. “I tried to find tools around the house to expose them to Spanish, but I couldn’t find anything. So I decided to start a business and found things from all over the country.” Herrera found books, CDs, toys, blocks, accessories and more. Inspired, she started making her own burp cloths, bibs, blankets, and clothes. “I brought items from all over, but I ended up starting our own line of blankets and bibs.”

As we met, Herrera began emptying the contents of her bag, first pulling out a blanket made with the traditional, bright floral hand-embroidered Mexican dress. “This is a dress that my grandmother would’ve worn. Now that I have a daughter I want to pass on a tradition of that dress. But I created the blanket with a modern twist to it.” While the pink Mexican dress adorns the middle of the blanket, it’s made up of several bold fabrics and materials like purple mink with raised polka dots and colorful cotton flowers. “Raised dots are good for a child’s motor skills,” says Herrera. “It’s good for them to feel different textures. But I also make other mainstream blankets that are still a little bit bolder than your normal baby blankets.” Herrera unfolded a two-sided blanket with cute zebra print and soft mink on one side, and turquoise and black flowers on the other. Perhaps it does not include the Latino flare of the blanket made with the Mexican dress, but it is still loud and proud; it is still Latino.

And it’s probably the Latino influence in her garments and accessories that captures people’s attention and won Baby Besos a business award from the South Texas Women’s Center. Herrera pulls out more contents from a bag she also sells, and low and behold, a bib with a giant Virgin Mary on one side and the color red on another, emerges. We are meeting in the Starbucks in a more—how do I be diplomatic about saying this?—less Latino side of town. The conservative Texan in me had to joke, while looking over my shoulder, “Well perhaps you can use the red side when you have more conservative guests coming over, and the Virgin Mary side amongst Latinos.” 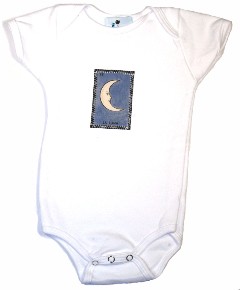 Herrera even sells dyed cloth diapers with embellishments, a pink shirt that says, “You’re giving me Ojo,” and a boy’s onesie with the words, “No Hablo” written on an etch-a-sketch. She also sells an array of baby blankets and other clothes with images from the famous Mexican game Loteria, like “El Apache” or “La Luna.” In addition, Baby Besos is growing. They’ve just partnered with Carrizo Project, a company that heads to Honduras to teach women how to sew and be self sufficient. “They are literally in the mountains of Honduras sewing!” Herrera excitedly explains. “And they teach the women confidence. I started selling their bags, and 100 percent of the proceeds are sent back to Carrizo Project in Honduras.” Herrera sells them as diaper and baby wipe holders. “But you can use them for other things like spoons and baby food,” she adds.

To see more Latino-centric items or to go shopping, logon to BabyBesos.com. They have everything from $5 onesies to $90 blankets with their average price running from $15-$25 an item.