With the recent NBA and the ongoing NFL lockouts, many people are feeling the sting of work stoppage. Players, Vendors, Sports Bars, the Fans – but none as much as the many who make their living off selling performance enhancement drugs to the players. “It’s been hard, man.” says steroid retailer Ed Ripley. “Usually this time of year I’m swamped with orders for HGH and topical creams, but with no football or basketball I gotta scrounge just to make ends meet.” Like Ripley, many steroid dealers are forced to go overseas to ply their trade – some setting up small shops in and around soccer fields in hopes of luring young, non-English-speaking customers. “Yeah, I’ve sold to a handful of Italian players – a whole Turkey club too – but while the money’s nice, you ain't a real professional until you sell in the Big Leagues.” Most steroid dealers agree. All intimating that no one takes performance enhancers quite like the American athlete. “They just do drugs at a much higher level.” explained one anonymous vendor. “Those overseas players just can’t compete. Hell, most of them can barely handle Gatorade much less steroids.” With the future of the NBA and NFL in doubt some HGH vendors have been forced to find other lesser sports to market their wares to. Bowlers, darts leagers, and even Putt-Putt golf enthusiasts have found use for their drugs. “Steroids have actually increased my ball size! “says professional bowler James Bowman. “Unfortunately, it has also decreased my ball size.” But with performance enhancing drugs also comes scandal. Most recently with the sudden, unexpected death of Twiggy the Water Skiing Squirrel, who just last year raised doping allegations after bulking up three times his normal body weight. 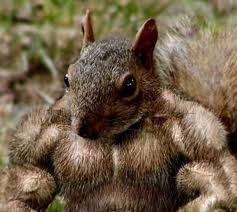 His autopsy has yet to be released.

Swiss Army Robot is a satirical column written by Jay Whitecotton and is intended to be taken as seriously as possible. You can find him on facebook and twitter.com/whitecotton. Write him at swissarmyrobot@sacurrent.com.