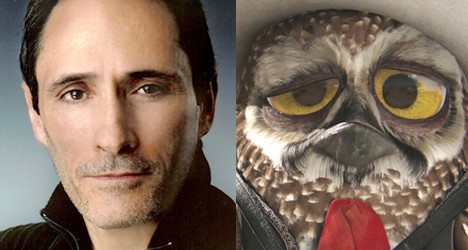 As one of the most sought-out voiceover actors in the TV and film industries, George DelHoyo is using his talent to do something he’s never done before – give life to an animated character in a feature film.

In Rango, DelHoyo, who has narrated over 500 movie trailers and a number of TV show promotions throughout his career, lends his voice to Señor Flan, an accordion-playing owl who performs music with his mariachi band and also narrates the film.

During an interview with me, DelHoyo, 57, who is originally from Canelones, Uruguay, talked about how his late father helped inspire his role as Señor Flan and why he doesn’t go around during the day talking in the same voice he uses to narrate movie trailers.

What was your first reaction when you saw a picture of Señor Flan?

(Laughs) I was pleasantly surprised. I had no idea it would be so detailed and beautiful. When I saw it I was blow away, not just by my character but all the characters. I also think the voice work of all the actors is superb starting with the incredible Johnny Depp.

I know in Rango, actors recorded their voices differently than in most animated films. They got a chance to work together with props rather than just recording alone in a sound booth. Did you get to participate?

Unfortunately for me, I didn’t. Señor Flan is the narrator so he doesn’t get to interact with the characters.

Please tell me you at least had an accordion in your hands when you were doing your voice work alone.

(Laughs) No, but you know what is so funny? My father, who unfortunately passed away a year and a half ago, the great Juan Angel DelHoyo, he was a great imitator. He was the only person I’ve ever met who could imitate an accordion. He would imitate the sound of an accordion and would do the body movements like he was playing it. [DelHoyo begins to imitate the sound of an accordion]. We would laugh so hard when we were kids. It was fantastic. So, I was thinking of my beloved father as I was doing the voice.

Do you consider the voice work you do on movie trailers “acting” or does it take a different skill set to find success in that specialized field?

I think you bring to your vocal work whatever your background is. When I do voiceover work, I always think in terms of character. I think about being part of the story or scene. When I did the promotions for The Sopranos I would always think of myself as one of those [mafia] guys.

Well, there definitely has to be acting involved because right now your everyday voice doesn’t sound like the one you use for the movie trailers.

Yeah, I always have to think about the demands and needs of the piece and what the music underneath sounds like. Then I tailor the sound accordingly. I don’t go around during the day going [in his movie trailer voice], “I’ll have one more drink. Bring me a fork. What did you put in the soup, lady?” I think I would scare people if I did that.

Was there a specific time in your life when you realized your voice wasn’t like most people and that you could probably make a career by using it?

My voice has always been a big part of my life. I started off in New York on Broadway and sang in musicals. I came to this country from Uruguay when I was three years old. I was speaking as much Spanish as a three-year-old child could and also learning English. I had to imitate sounds of another language and culture. I think learning both languages simultaneously helped me develop my ear and hear how different people sound.

Out of all the great voices in Hollywood who would you most like to have read you a bedtime story?

I think Morgan Freeman is a great choice. I think he has a beautiful voice and is a great actor and storyteller, so I’m going to go with him.