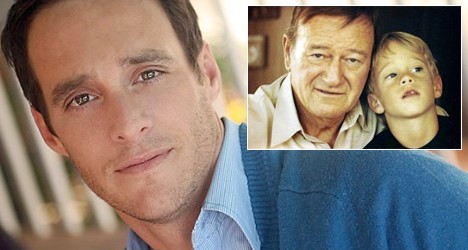 Brendan Wayne remembers when he was four years old, visiting his grandfather, iconic actor John Wayne, on the set of the 1976 Western The Shootist. It was the Duke’s final film of his career. He succumbed to cancer three years later.

“I remember him picking me up with one hand and smiling at me,” Wayne told me during an exclusive interview. “I didn’t even know I was on a movie set. I thought that’s where my grandfather lived.”

Thirty years later, Wayne has followed in his grandfather’s footsteps and become an actor. Although Wayne admits he doesn’t have any allusions about being as famous as the man who starred in over 80 Westerns including True Grit and The Searchers, he still wants to give the best he can to an industry that has provided his family so much over the years.

“Everything is relative in life – my relative just happens to be John Wayne,” Wayne said. “That’s what I know. I want to live up to that.”

After earning small roles in films such as Fast & Furious and Couple’s Retreat, Wayne joined the cast of the sci-fi Western Cowboys & Aliens. In the film, he plays Charlie Lyle, a deputy sheriff in the Old West who must help fight off an alien invasion.

During our interview, Wayne talked about any responsibility he feels continuing his grandfather’s legacy and how he thinks the Duke would’ve reacted if alien spacecraft had landed in one of his movies.

What made you want to be a part of this film?

Well, first and foremost Jon Favreau (Iron Man) was making the film. You always want to work with guys who are creative. Plus, it’s a Western. I grew up watching Westerns. It’s part of my American heritage. Then I saw there was sci-fi mixed with the classic Western and it looked awesome. I got lucky and was able to work with these little actors like Daniel Craig, Harrison Ford, and Sam Rockwell. (Laughs) They were all amazing. You really have all the classic elements of a Western. Jon was so great at taking that challenge.

What were your initial thoughts when you heard the title Cowboys & Aliens?

My first thought was, “Hey, you mean Indians, right?” Then it was explained to me that I was completely wrong. (Laughs) I told a friend of mine from Texas about the idea and he said, “They didn’t have aliens back then.” I was like, “What do you mean they didn’t have aliens back in the 1800s?” I was like, “When did they start existing? Since the 1960s?”

You grew up riding horses in the rodeo. Was it fairly easy to transfer your real-life cowboy sensibility into your role as a deputy?

I grew up on horses, but not like the stunt guys working on this movie. I did my own stunts, but I was always surrounded by these stunt guys who treated me like family. I had such a good time running up and down hills on these horses. I got to do a lot of riding. I’m sure I didn’t tarnish my grandfather’s legacy and make myself look stupid. Everyone made sure I looked damn good on a horse.

There’s always going to be this idea of legacy when someone follows in the footsteps of a famous relative. Do you feel like it’s your job in a sense to continue where your grandfather left off or is that way too much to ask of anyone?

I don’t know if it’s way too much to ask. My grandfather was and is important not because he lived up to something, but because he was something and stayed true to that. He was who he was and lived his life that way. As far as feeling any responsibility, I do feel that. I carry that around as a good thing because I don’t know any other way.

What is your earliest childhood memory of your grandfather?

I have the movie poster right across from my bed for The Shootist. It’s one of my earliest memories. I got to go to the set. I was standing outside of the bar that he gets killed in later on in the movie. I remember thinking how cool it was. If I knew then what I know now, I would’ve tried to buddy up with Ron Howard when I was a lot younger.

You were only seven years old when your grandfather passed away in 1979. Do you remember that?

I remember when he was hit with cancer and was going to pass way. I remember being in the hospital. I remember how full of spirit he was. You could tell he was thankful for the life that he lived. He didn’t have many regrets as far as I could tell.

Can you pick your favorite film of his?

It changes all the time, but I think at the end of the day if someone asked me to pick one John Wayne movie it would be The Man Who Shot Liberty Valence. His character was such a human character. He wasn’t a good guy, but he did the right thing at the right time.

What did you think of the Coen Brothers remaking True Grit and are you open to more interpretations of your grandfather’s work?

You know, I think the good thing about the Coen Brothers’ movie was that it was the Coen Brothers’ own story. It was more reminiscent of the book as opposed to the role my grandfather owned. I thought they did a great job making it their own. I thought there had been enough time between the films where it didn’t feel like they were trying to challenge it directly. I have a hard time with remaking movies that were already good. I get remaking a movie that wasn’t good. But I think the Coen Brothers did a great job. Jeff Bridges was probably the only guy who could have pulled that off. At the end of the day, they made their own art, and it was good.

How would your grandfather have handled an alien invasion in one of his movies?

(Laughs) He would’ve put the reigns in his mouth, loaded up his guns, ridden across the plane and shot as fast as he could and told one of those aliens, “Fill your hands, you son of a bitch!”