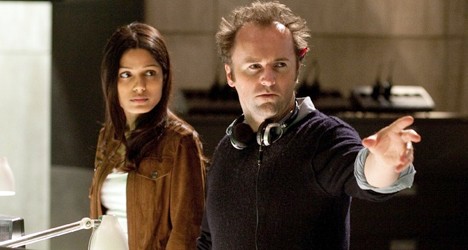 He might be a first-time studio director, but British filmmaker Rupert Wyatt was given the opportunity to make his big-screen debut with a reboot of one of the most iconic sci-fi franchises of the last 50 years.

In Rise of the Planet of the Apes, a prequel to the original 1968 film starring Charlton Heston, Wyatt tells the story of Cesar (Andy Serkis), an incredibly intelligent chimpanzee, who has been raised and experimented on by a genetic scientist (James Franco) in hopes of finding a cure for Alzheimer’s disease. Ceasar’s confinement soon triggers a revolution among a group of apes with Ceasar leading the uprising through the streets of San Francisco.

During an exclusive interview with me, Wyatt, 38, talked about having to live up to the Planet of the Apes films of the past and what it was like working with Andy Serkis as he portrayed the leader of a simian rebellion through a motion-capture suit, much like he did in Peter Jackson’s 2005 remake of King Kong and as Gollum in The Lord of the Rings trilogy.

How did you become involved in the reboot of this iconic franchise?

I had been developing a number of scripts and projects and had this working relationship with 20th Century Fox. When the Rise of the Planet of the Apes project came up they started interviewing potential directors. That’s when I was called in. When I met with the producers, we saw eye to eye and realized we wanted to make the same movie. I guess they thought I was worth the risk.

What was it like directing a project for the first time that you hadn’t written yourself?

There were upsides and downsides. The downsides were that when you write something you really have this innate understanding of it. You’ve lived and breathed it. You’ve put your own words on the page. You know it intrinsically. When you’re working from someone else’s script, you really have to subscribe to it and get on board and understand it. For me, making this film as a director and not a writer/director was actually quite liberating. You can allow yourself the freedom to explore in a way you would have never allowed yourself to do as a writer.

Were you familiar with the films that had come before?

Very much so. I grew up a huge fan of the original. I didn’t actually watch the sequels until I was in my early 20s living in New York. A friend and I sat down and watched them all back to back one Saturday afternoon, which is the sort of thing you do when you’re unemployed.

Although this new film is not a remake of any of the past films, did you still feel pressure as a director since it shares the “Planet of the Apes” moniker?

I guess so, yeah. We’ve been very respectful of the franchise as much as we’ve been looking to lay a foundation for it. This is an origin story in the real sense of the word. It’s the origin of the species. It’s not like any of the other films in that respect. We are dealing with real apes. We wanted to remain as plausible and truthful to that species. We also wanted to tell the story of how another species on this planet could become as evolved as humans and break the chains of oppression and subjugation by our species. That was a really intriguing premise for me – the idea of a revolution happening against us; one that’s not your typical alien invasion movie, but actually something far more believable.

The last time the Planet of the Apes franchise was rebooted was in 2001 and things didn’t go too well for Tim Burton and his version. Were you worried audiences might still have a bad taste in their mouths?

Well, it’s not for me to judge that film. I remember going to see it at the cinema and remember coming away from it with one thought: The Planet of the Apes series is spectacularly successful and appealing to audiences because it has to do with us. It’s a story that holds a mirror up to who we are. The original film played on the Civil Rights Movement and the whole idea of Armageddon and annihilation and the undoing of mankind. All of those points were touched upon in a really exciting way. At the end of the day these movies are blockbusters. They are all born out of the idea that these situations takes place in our world. The Tim Burton version is perhaps the only film from the franchise that deviates from that. It takes place on another planet. That might be the reason audiences didn’t embrace it as much as they would have. This new film goes back to the original way. It talks about our world now and is very understandable to modern audiences.

This will be the only Planet of the Apes film to feature computer-generated apes instead of the usual actors in costumes and makeup. What made that the best decision for this particular movie?

When I first came on board there were all sorts of possibilities in how we were going to tell the story. Some of them were implausible from the get-go like using actors in ape suits. It was impossible to us because unlike the other films, this one was about real apes. There was no way an actor could anatomically fit into the body shape of a chimpanzee. Maybe you could make a gorilla work. But we discarded that idea right away as a way to tell the story realistically.

So, you were left with performance capture.

Actually, we were left with two options: using live apes or using performance capture, which at the time – a couple of years ago – everybody was questioning whether we could pull it off. We couldn’t ask a savvy, modern audience to go into a movie and believe in the apes, but not actually believe in the way they’re rendered and created. You have to believe in them so you can feel for them and empathize with them. They had to have a soul. So, yes, there was a possibility of using live apes. It was discussed and explored and very quickly it was realized it was morally wrong and a little ironic that we would consider it since were telling a story about the oppressed. We didn’t want to have to manipulate them to tell our story. We are very glad we didn’t go down that road. So, for performance capture, we went and talked to WETA, who is the best in the world at what they do. We needed them to sign on and believe we could pull this off. They were really excited at the opportunity.

And WETA had, of course, already proven how well they could make the technology work with King Kong.

Yes, but King Kong is a 26-foot gorilla. That’s heightened reality in itself. Rise of the Planet of the Apes was much more about creating what is basically a living, breathing humanlike creature that an audience would truly believe in. That had never been attempted before.

Was it natural to turn to someone like Andy Serkis to make this performance work?

Yeah, he was very much the Holy Grail for me. I thought of him from the get-go. WETA already had a wonderful working relationship with him. We all believed that he would be able to convey the emotion that WETA would need. Andy has a really fantastic reputation with motion capture. That’s not to say Andy has this technology to himself exclusively. We had actors, who had never put on a motion capture suit, play some of the other apes who were very important to the film. But ultimately, it was intrinsic to our story and the success of the film that we had an actor like Andy. It really worked well for me as a director to have someone to collaborate with who had so much experience.

What was your experience directing a film that relied so much on special effects?

What’s really interesting about motion capture is that it really is there to serve the story and nothing more. The technology is there to allow a human actor to play another character that doesn’t look like him. It’s no different than an actor covered in prosthetic makeup. In some ways it’s actually more liberating because they don’t need to be weighed down by that. Their performance can actually show through in a very subtle way. You think of John Hurt when he played the Elephant Man. When he played that role he transformed through all that makeup. The great thing about computer-generated performance capture today is that the actor doesn’t have to worry about it. They don’t have to sit in a makeup chair for four hours. They can just focus on the performance itself. In some ways that makes life a hell of a lot easier and less demanding for all the filmmakers involved.

Do you think actors who work with performance capture should be recognized alongside other actors when it comes to end of the year awards? Some people were upset that Andy wasn’t nominated for an Oscar for his role as Gollum or that Zoe Saldaña wasn’t given more love from the Academy for her role in Avatar.

I think the day will come when people begin to realize that a performance is a performance whether it’s on stage or in a film or however it is done. Wherever it comes from, it comes from the actor. That is as true about performance capture as it is about any other way of telling the story. Early on, I was told by WETA that I can’t expect a performance to be created in post production. If you do not have it on camera, you do not have it. The beauty of motion capture is that it’s all human. It’s real emotion. There is no digital animator sitting in front of a computer. It’s about a living, breathing actor playing that role.