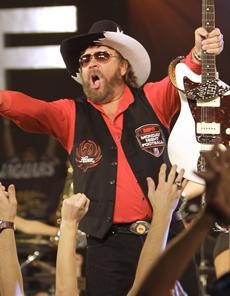 ESPN has announced they are ending their nearly 20-year hostage negotiations between Hank Williams Jr. and the NFL. What started as a quiche promo for the Monday-night event became two decades of flag-waving, barn-burning hellfire led by the Country Western singer whose hold on introducing the sport to millions of fans grew to tyrannical proportions.

“He sort of became a cross between Kim Jong-Il and Macho Man Randy Savage,” says NFL commissioner Roger Goodell. “A dictator with the flamboyance of a wrestler past his prime and a penchant for large glasses, Hank held a hypnotic terrifying place in the minds of the American people.”

But after a mindless interview on Fox and Friends, where Williams compared Obama to Hitler, ESPN finally got the leverage they needed to dump "Bocephus" and free the country from his lyrical spell.

But at what cost?!

As the teams faced off on Monday night, millions of fans watching reported never quite feeling fully prepared. “It was rough," said football fan Dave Poloff. “I found myself feeling anxious at some points and disengaged at others — never wholly into the game itself.” Other fans shared similar stories complaining that everything from incomplete snack trays to forgetting beer altogether kept them from maximum preparedness.

In response to fan delerium, ESPN and the NFL have teamed up to find a new voice to usher in their Monday-night extravaganza.

“Like anytime a King is dethroned, finding a replacement is an arduous task.” continued Goodell. “We’ve debated everything from declaring Willie Nelson as "Lord Protector of MNF" to pitting Taylor Swift against the Black Eyed Peas in mortal combat — the survivor of which will then forever quiz the American people on their readiness.

And what of Hank Williams Jr.?

The outspoken country star has been banished to the small island of Elba located in the Mediterranean Sea. Where he holds sovereignty over its landscape and officially retains the title "Emperor of Monday Night Football." Though safely secured off the Tuscan coast, there are rumblings of a comeback as the Country star enjoys his new-found fame, possibly even contemplating a new world tour.

Until that day Americans all over will just have to prepare themselves — to be unprepared.