Tony Robbins Success Attributed to Being a "Midget Giant" 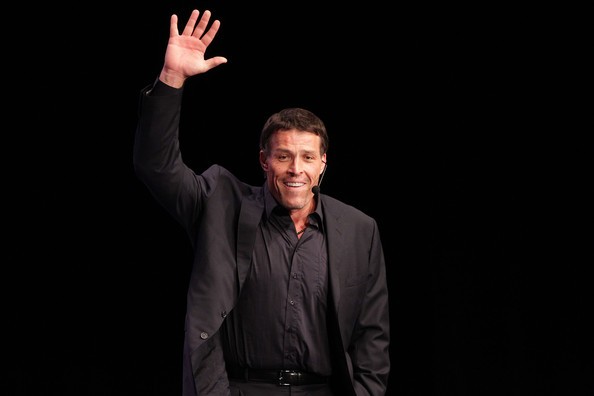 In an astonishing revelation, the key to success by self-help author and motivational speaker Tony Robbins is finally revealed by inside sources. As it turns out the author of Awaken the Giant Within – is an actual Giant. A doctor close to Robbins has released astonishing data showing that the motivational speaker isn’t human at all, but a descendant of humanoid-like beings that roamed the earth in ancient times, often referred to as 'Titans'. “The tricky part was, at 6’7, Anthony isn’t really considered tall amongst his own people,” says personal physician Dr. Henry Brooks. “In all actuality, Tony Robbins is a 'Midget Giant' – which is not to be confused with a ‘Giant Midget’ (a human being with the proportions of a little person, but with normal height).“ But how has this helped his career? Dr. Brooks and many other scientists believe that height plays an important role in how men are perceived by others. A towering presence provides an inherent sense of authority and competency shorter people have to work harder to earn. By utilizing his 6’7 Midget Giant status combined with a southern California charisma, Tony Robbins has been able to amass a fortune through motivational speaking without ever having to work a real job. “It’s just amazing that he was able to overcome the shortcomings of his midget gigantism to achieve so much. It just proves what he’s been doing all along; Awakening the Giant within.” Many others agree. At least 4 million people worldwide have attended his seminars or bought his audio book series. People like regional web design business owner David Owens, who cites Tony Robbins as the primary reason for his success. “Before I met Tony Robbins I couldn’t keep my head above water – in business or my personal life. I will never forget the day he sat me down in his lap, looked me in the eye, and told me to empower my inner well being – or else he would “eat my baby”.” brags Owens. “Being a new father and not wishing my child to be devoured was an amazing source of encouragement.  Now my business is thriving across three states and not one day goes by where Tony doesn’t call to congratulate me or ask about my little girl. How she’s doing in school –whether or not I own a commercial-sized oven. “ While Tony Robbins has yet to comment publicly on his now non-human status, many are speculating that he is already building a brand new self-help campaign dealing with the turmoil of hiding his inhuman heritage while suffering from Giant Dwarfism. The first, ‘Befriend a Giant Blue Ox’, is set to be released in the spring followed by ‘Who took my Goose!?’ soon after. For a sneak peak, three chapters titled ‘Success starts with you or else I will eat your baby’, ‘Stop smoking or I will eat your baby’, and ‘Fee Fi Fo-get your past and live for today or I will eat your baby’ have been released on his personal web site.