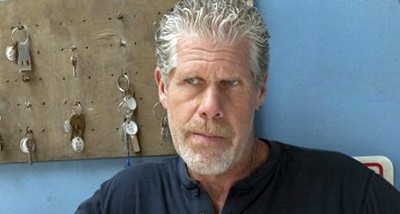 Best know in recent years for playing the grouchy comic book superhero Hellboy and for his role as a motorcycle club president on the TV series Sons of Anarchy, Ron Perlman is an actor that’s always had something to do ever since coming onto the scene in 1981 with the prehistoric adventure Quest for Fire. Since then, Perlman, 61, has starred in a variety of films and TV shows including last year in Drive and the remake of Conan the Barbarian.

In his latest film, The Scorpion King 3: Battle for Redemption, Perlman plays Egyptian king Horus. During an interview with me, Perlman discussed his first trip to Thailand to shoot the film and what he thinks about all the Oscar buzz his fellow Drive co-star Albert Brooks is receiving.

The Scorpion King 3: Battle for Redemption was released on DVD and Blu-ray Jan. 17.

What drew you to a role like King Horus in The Scorpion King 3?

You were also in Conan the Barbarian last year. What is it about these action fantasy films that resonate with you?

The only thing that ever matters to me is how well the story is rendered on the page and how interested I am in exploring the particular humanity of the character they offer. It’s never about the genre or other trappings like the period or whether it’s a comedy or drama or action film. In both instances, I really admired the characters and felt like the storytelling was really interesting, unpredictable and smart. The fact they are both period pictures with sword fighting is truly coincidental. It has no weight on whether or not I decide to be a part of the film.

As an actor, is a film that is going straight to DVD like The Scorpion King 3 as rewarding as a film that has a theatrical release?

I never really concern myself with what happens to a project after I’m finished working on it. I mean it’s nice when you're part of something that’s successful and that people love and respond to positively, but you have to be prepared for the opposite of that as well. The only thing that I know that I have any control of is the time I spend working on a project. If I’m happy with what I’ve done and other people I’m working around are happy with it, then I don’t concern myself with whether is goes to DVD or 8 million screens across the universe.

What was it like shooting the film in Thailand? Had you ever shot a movie there before?

It was my first time in Thailand and it was a beautiful experience for me. I’m kind of obsessed with immersing myself in new cultures and trying to understand how people think and why they move through life the way they do and what are the things that are culturally and socio-politically affecting them. It’s really interesting to go to as many places around the world as humanly possible and explore all those things. I was really struck with how beautiful the people of Thailand are. They’re very generous and joyful. They have dignity even in poverty. I try to understand how that is possible. Thailand was a phenomenal addition to a very lucky life of moving through the world that my profession has afforded me.

Now, you’re in pretty incredible shape yourself, but does sharing the screen with guys like Batista and Kimbo Slice ever get even a little intimidating for you?

Well, first thing I do when I get on the set is challenge them all to a fight. (Laughs) Then when I finish kicking their asses, we know who the real deal is. I have nothing but admiration for guys like that who are dedicated as they are and keep themselves in the condition they do. We all start out on this unbelievable respectable level with each other. We all know we’re here to do this movie together. We all know we all make each other look good. It’s great to work with guys that have delighted you in a lot of different ways.

What makes an actor like Billy Zane easy to hate as a movie villain?

It’s just the way he throws himself into a role. He’s one of the most theatrical performers that I’ve ever worked with. He doesn’t do anything halfway and he makes big, broad choices. So, when he’s playing a bad guy, that guy’s really bad.

Congratulations of everything that is going on with Sons of Anarchy. It must feel pretty great to be on a TV show with so much substance and to be able to mold your character every season.

It’s amazing. That’s one of those truly delightful aspects of life for me in these last few years. The public has really embraced that show. The critics are starting to realize the scope of the show and have really given us a second look. We’re getting a lot of love critically and in a populist way. Those things are rare in my business – to be that successful. At my age I’ve done a lot of things before that have fallen flat on their faces, so nobody appreciates a show like Sons of Anarchy more than I do.

On that note, someone who has found a lot of success in the last year is your fellow actor in Drive Albert Brooks. What are your thoughts on all the Oscar buzz his role is receiving? When you were shooting the movie did you realize it was an Oscar-worthy performance?

Well, yeah, all you have to do is read the script and see that the role of Bernie Rose is phenomenally rendered. [Director] Nicolas Refn might be the only guy on the planet that would’ve thought of that particular casting. It’s so interesting to put Albert Brooks in that role. You know what you’re going to get on the screen is going to be compelling and watchable and very unobvious. That’s one of the reason it’s attracting great praise and critical attention. I’m not surprised at all. Albert is one of the great American icons. He’s truly and American treasure and has been since he first burst onto the scene a few decades ago. It’s delightful to see him being noticed for this role.

If you could tell your fans to revisit one of your movies that you don’t think received enough attention, which would it be and why? Personally, I think more people need to see a little dark comedy you made back in 1995 called The Last Supper.

The Last Supper is definitely a film I’m quite proud of. I did a little movie about three years ago called I Sell the Dead, which got a lot of attention at the film festivals. People loved it critically. Audiences loved it. It got a horrible release and no one saw it. I was so proud of the work we did in that movie. That would be the movie I would recommend people to go get. It’s pure entertainment and really effective.