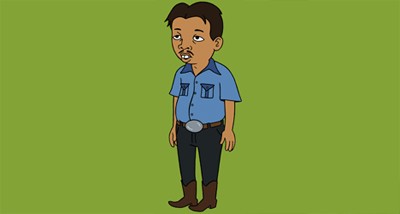 It’s been 7½ years since Napoleon Dynamite became a cult classic when it hit theaters in August 2004. Now, Napoleon, Pedro, Kip, Uncle Rico and the rest of the original characters are back for a brand new adventure in small-town Idaho– and this time they’re cartoons!

The new animated series Napoleon Dynamite joined Fox’s Sunday night lineup for the first time last weekend. During an interview with me, actor Efren Ramirez, best know for his role as Napoleon Dynamite’s sidekick Pedro Sanchez, talked about reprising his role as the sweet-hearted transfer student from Mexico and how revisiting a character like Pedro will be good for him.

Napoleon Dynamite has returned but in animated form. What’s going on?

(Laughs) Yeah, Jared [Hess], who directed Napoleon Dynamite, always wanted to do something else with the film. The studio thought of doing a sequel or a prequel. I think Jared also had the idea to make it into a cartoon. They definitely wanted to create something that was as great as the first. You want to do something bigger and better without destroying the characters or the story. There are so many fans out there that are so excited that Napoleon Dynamite is coming back.

Not only that, but the entire original cast is back to voice their characters, right?

Yeah, I’m really excited they got the original cast. The ensemble cast in Napoleon Dynamite really got close to each other. We all became good friends, so to be able to be on set with them again is like working with family. It really gives us the opportunity to participate even more in the creative process.

What did you think of Pedro when you saw him in animated form for the first time?

(Laughs) Well, my head doesn’t look like a football and it does look kind of goofy, but that’s fine. I just kept thinking, “This is really sweet!” Seeing Pedro in cartoon form is still really surreal. I’m really excited about the show and can’t wait to do more episodes.

Napoleon Dynamite is joining heavy hitters like The Simpsons and Family Guy on Fox’s Sunday night lineup. Is there any pressure?

(Laughs) Well, on a grand scale, I think each show is really different even though they are all animations. They each are in their own genre. To be a part of that is just amazing. I hope we can dominate like those show have done – for at least 50 years or as long as I’m alive!

The last time I interviewed you, you said it was important for you to distance yourself from your role as Pedro so directors wouldn’t automatically think of you as “that guy from Napoleon Dynamite.” Do you think reprising your role might take you in the wrong direction as an actor?

There is a great divide when you get into this business. You can work on things that are artsy and build on story and character or you can do things that are popular and just keep playing the same thing. But let’s look at this with perspective: Buster Keaton and Charlie Chaplin played one specific character in all their films and they were very funny. When I get roles like Pedro I think about the premise of the story and where can I take the character. If it’s heartfelt, then people are going to want to know the story and the character. I still want to be an actor that can do lots of different things. I’ve been doing that ever since Napoleon Dynamite came out.

What can we anticipate from an animated version of Pedro?

Well, we get to see more and explore more with Pedro and the rest of the characters. You also get to see more of the world they live in. In an animated series things can blow up and people can die, but they’ll be back the next week.

Have you ever played tetherball against Jon Heder? Who won?

(Laughs) No, I haven’t, but I’m sure he’d probably win because I’ve heard he has some mad skills.

What is the coolest piece of Napoleon Dynamite memorabilia you own?

I have this Napoleon Dynamite poster from the U.K. that is very different. I also have the two original “Vote for Pedro” t-shirts from the movie. I hope to give them to my kids one day if that day ever comes.