Edge on his career, 'Bending the Rules' 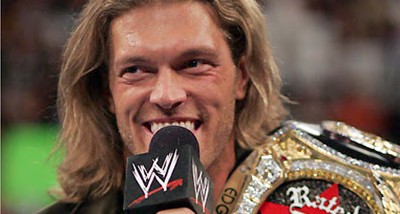 As an 11-time World Wrestling Entertainment (WWE) champion, wrestling superstar Adam “Edge” Copeland knows it takes giving everything he has to be the best in the business. Forced into retirement last year because of a major neck injury, Edge now hopes to be as successful as he was in the ring during the next chapter of his life, a chapter that includes acting.

In the action comedy Bending the Rules, Edge plays Nick Blades, a detective who teams up with an Assistant District Attorney (Jamie Kennedy) to bring down a criminal faction in their hometown of New Orleans. Along with his new movie, Edge will also be inducted into the WWE Hall of Fame on March 31 where other famed wrestlers like the late Andre the Giant and Hulk Hogan have already claimed their legacy.

During an interview with me, Edge talked about his plans now that his wrestling career is behind him.

Bending the Rules is playing exclusively at the Santikos Northwest 10 Theatre.

Did it feel like acting was the natural step to take after wrestling?

I didn’t really know what the natural progression would be when I retired because I didn’t expect to retire. It kind of came out of nowhere. I just thought making a movie would be fun to do, and it was. We shot the movie in August 2010. Since then, so much has changed. Now that I have time, I think it could be something going forward that I could legitimately do.

Does it help that the WWE is so supportive of its wrestlers when it comes to branching out as movie stars and even has a production company where you can start your career as an actor?

I think it does because it gives us an opportunity that we wouldn’t normally get. Just being in the WWE helps. I mean, two days after I retired, I got a call through our offices from SyFy. They wanted me to do a show called Haven. The producer saw my retirement speech and thought I would be good on the show. I did the second season of Haven and will shoot the third season soon. It looks like acting could be a semi-regular thing. Who knows, maybe one day I’ll get an agent.

Go back to your retirement speech you made last April for a bit. Was there something specific you wanted your fans to know about you?

I just really wanted to go out and say how I felt. There really wasn’t any kind of direct message or anything like that. In hindsight, I think a lot of people thought it was my choice to retire. There’s been some confusion there. It wasn’t like I got the news [about my neck injury] and said, “Alright, looks like I’m going to have to hang em’ up.” No, it was like I had to retire. The WWE was not going to allow me to wrestle anymore. They were right, but I would’ve still kept going.

Yeah, I mean, I was wrestling [with a neck injury] for a while before we actually got a real close look at it and were like, “Whoa! It’s pretty messed up in there.”

Is there a chance you could wrestle in another organization?

I definitely wouldn’t go to another organization. I can’t go from the NFL to the Arena Football League. More power to everybody who has done that. I hope they can all make a living doing that, but I’ve wrestled in front of 80,000 people at WrestleMania. I couldn’t go anywhere else.

How are you health wise right now?

Now, I feel great. There are certain things that annoy me and I’m learning as I go. I’m still active. I’m still able to get up and go hiking and mountain biking. I’ll probably have to get another surgery at some point, but I figured I would just put it off for as long as I could. Long flights bother [my neck]. When I find out that something bothers it, I just don’t do it anymore.

What was going on in your head when you got the news you couldn’t wrestle anymore?

I think I had already been taking those steps [to retirement] for the last few years. I knew how I felt physically. I didn’t feel great. I was walking around like an 80-year-old man at 37. I didn’t assume [my wrestling career] was going to last forever. I knew I was much closer to the end of my wrestling career than I was to the beginning.

You’re 38 years old now. If the health concerns weren’t a factor, how long do you think you could’ve gone for? I mean, Rick Flair is still going strong in his 60s.

I wouldn’t have gone that long. I would’ve gone to 40. I think that would’ve been a good age. I started wrestling when I was 17, so I’ve had a long career.

What about a future as an announcer since you have a degree in radio broadcasting?

No, no. I don’t want to be that close to [wrestling] and then not do it. I say that now. But you know, the part that I don’t miss at all is the traveling. With [being an announcer] there would still be traveling involved. I want to do traveling on my terms now. I don’t miss the hectic grind of that schedule. I know I couldn’t do that anymore. I flew here last night and I was already tired. (Laughs) I like retirement.

How does it feel going into the WWE Hall of Fame at such a young age, and before other wrestlers like “Macho Man” Randy Savage?

I don’t really think in terms of other people. I don’t really put a whole lot of thought into stuff like that. I did get text and calls when it was announced I would be inducted. Two of the first people who called me where Shawn Michaels and Bret Hart, who told me they were proud of me and that I deserved it.

Would you like to have an acting career that resembles the one the Rock has had over the last few years?

I’d be up for it. But I don’t look anything like the Rock. I don’t think we’d be going up for the same parts. He’s half Samoan and half black and I look like a Viking. Will I aggressively pursue it? Probably not. I think occasional stuff would be fine. I wouldn’t put myself in a position where I wasn’t going to have fun. I’ve had fun my entire adult life, so there’s no sense in stopping now.

What was it about the role in Bending the Rules that you liked?

Well, it didn’t take itself too seriously. I don’t take myself too seriously. I’m a detective who walks around in a Hawaiian shirt and Hawaiian shorts. The character felt like [Jeff Bridges’ character] from The Big Lebowski if he could fight. I thought I could handle this easy-going knucklehead who likes to eat doughnuts in every scene, but when push comes to shove would headbutt your face off. I thought I could take this experience and build on it toward other things.

Was there good chemistry between you and Jamie Kennedy?

Yeah, right from the get-go we found out that we were both total idiots. We just hung out. I think that transferred to the set because we acted exactly like we did when we weren’t acting. It was good to have that rapport with him.

Throughout a majority of your career you were known as the “R-Rated Superstar.” What would you say is the most G-rated thing about you?

Probably the rest of my life. In the WWE I played a character that’s nothing like the person I’m going to be in retirement.