Pit soars in 'Kid Icarus: Uprising'... if you're right-handed

April 09, 2012 at 9:32 PM
comment
***Author's Note: I chose to keep the review separate from the left-handed issue, which I will address at the end of the article. If you are left-handed as I am, be sure to read that section closely before buying this game.***

How many of you remember Pit? I can say with complete honesty that before Super Smash Bros. Brawl came out back in 2008, I never knew of him. As it turns out, the last time Pit was around was all the way back in 1986 on the NES in his first game ever, Kid Icarus. Well, someone in the big Nintendo family finally decided to get around to making a a sequel, but not any ol' run of the mill sequel. In fact, Kid Icarus: Uprising is so vastly different from the original game that I wouldn't even call it a sequel at all. Blending on-rail shooting elements familiar to Star Fox fans with a very cool, customizable on-the-ground fighting system, Uprising is a refreshingly unique and awesome 3DS game that boasts some of the best use of the portable console's 3D graphics.

As a loyal servant to his goddess Palutena, Pit is an angel that is tasked with taking on Medusa, who has risen again from the Underworld they put her in all those years ago. Unfortunately, Pit doesn't have wings of his own, and Palutena can only bestow the gift of flight for five minutes at a time. If the idea of an angel with temporary flight seems a bit funny, you'll be happy to know that the writers make fun of that fact frequently. The whole narrative is kept very tongue-in-cheek and peppered with bits of humor that keep the story from folding in on itself. It's always refreshing when developers don't take themselves too seriously and give their characters a little breathing room to joke and point out some of the game's more ridiculous points. Pit and Palutena have gentle banter with each other that will often force a smirk out of you.

The various chapters begin with a flight segment that guides Pit from the heavens to the location on the ground below. All of them have great visuals that really bring out the world and make it seem like a much larger place, but the on-screen action will often prevent you from having a moment to enjoy the scenery. Once on the ground, you take control of Pit with the analog while aiming his bow with the stylus. The action can get a little hectic at times, but the 3DS doesn't falter even when several enemies are launching projectiles at you. Holding the 3DS while moving and aiming all at once, however, gets taxing quickly. Fortunately, the game comes bundled with a stand in which the 3DS can sit, taking the pressure off your wrist. Looking around with the stylus makes sense at first, but the camera is actually a bit looser than I would have preferred. Normally this wouldn't be an issue, but when it is directly tied to your aiming ability, you'll start to notice how the camera makes you more inaccurate.

A welcome innovation in Uprising is the sliding difficulty scale. Before each chapter, you can move the slider to how easy, or how difficult, you would prefer it to be. Harder difficulties mean more enemies with more health, but it also improves the quality of loot you can pick up. Better equipment and weapons are frequently dropped by enemies, which you can later sell, fuse, or equip for better attributes. If a bow isn't your thing, Pit has access to clubs, swords, and even giant energy cannons that each cater to different play styles.

From the ground to the air, Kid Icarus: Uprising is a delightfully fun action game that keeps each level short and sweet. Never too demanding, yet not without moments of real challenge, Uprising is a fantastic reintroduction of a long-forgotten Nintendo character that deserves the spotlight. With the WiiU looming over the horizon, I wouldn't be surprised to see a full-fledged Kid Icarus game happen on the Wii U sometime (unless they're already working on it). But if not, this game will do just fine. 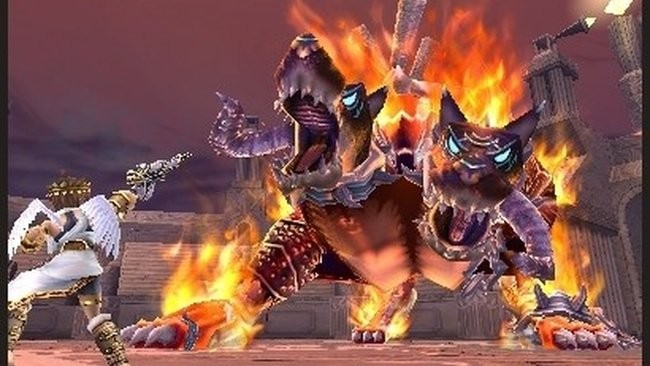 See you in the next level,

Author's Note: In my excitement to purchase this game, I overlooked the very small print that the movement/aiming system is for right-handed people. Left-handed controls could only become available with the recent 3DS add-on that gives you another analog stick on the right side. Due to my extreme reliance on my left-hand, the game is almost unplayable for me. I was unable to complete any chapter beyond a difficulty of 4 or higher, and my improvement over the several hours was very little. While I understand why I can only play it right-handed since the analog stick is on the right side, I can't help but feel a bit cheated. Moreover, when I went searching for the 3DS add-on, I found that every GameStop or Best Buy I went to either didn't have it, or didn't even know what I was talking about. The only way to get my hands on one was to order one through Nintendo's website which is, well, disappointing. The experience has me wondering about the strategy behind this add-on and how Nintendo seemed to drop the ball. Perhaps it's just me, but I should have been informed about this factor before buying the game, or at least confronted by a notice that's VERY BIG and VERY READABLE.