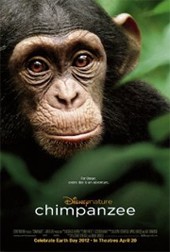 In the entire animal kingdom, no name is as synonymous to a specific species as British primatologist Dr. Jane Goodall is to chimpanzees.

Goodall, 78, is best known for her endless research on wild chimpanzees in East Africa. In support of the new Disneynature documentary Chimpanzee, Goodall spoke to me about the rare footage directors Alastair Fothergill and Mark Linfield captured of a full-grown adult male chimp (Freddy) raising a baby chimp (Oscar) all on his own. During our interview, Goodall also explained how even after five decades working with them, chimpanzees continue to teach her new things, and how a film like Chimpanzee will deter people from buying primates as pets.

Chimpanzee opened at theaters last Friday. A portion of the film’s proceeds during opening week will be donated to the Jane Goodall Institute, an international wildlife and environment conservation organization founded in 1977 to improve the treatment of primates through research, education and advocacy, and to preserve and sustain their habitats.

How rare is the story featured in the documentary Chimpanzee where a baby chimp is being raised by a full-adult male chimp? Has this ever happened before in nature?

As far as we know, it has only happened once before in the 52 years I have been involved in chimp studies across Africa. You have adoptions, but to have a top-ranking alpha male adopt this baby chimp is just amazing.

Since this is so rare, I’m wondering what is going on in your mind seeing this footage for the first time?

A lot of things are going on in my mind. First of all, it takes me back to the days when I, too, roamed through the forest and followed chimpanzees and saw amazing events while I traveled around the world trying to save chimps. It was also making me think of the tremendous effort this film team put in to get this extraordinary footage. It’s not just the story of the alpha male and little Oscar, it’s also the warlike relations between two neighboring communities. The film footage there is utterly incredible. There are also the long sequences of little Oscar showing us how young chimps learn by watching adults. In this case, it’s especially poignant because he’s watching the alpha male rather than his mother.

What other behaviors from these two specific chimps are captured on film that would be considered rare footage?

Well, we've seen these things before. Freddy, the big male, is giving the little chimp tender love like a mother would – carrying him around and sharing his food. What’s rare is that this gentle side is happening underneath this aggressive demeanor this adult chimp needs to have. It’s what makes the film so special along with the absolutely fantastic cinematography.

You've been working with chimpanzees all your life. Are there still days when you learn something about these animals you didn't know before?

I’m always learning new things. It won’t be a dramatic new thing like discovering chimpanzees in the wild use tools and hunt. But every chimpanzee has a different personality. They all have emotions and intellect like us. Because of this we collect different life histories and all their early experiences. It’s very fascinating data on individuals, families, and communities.

Is there something they have taught you overall about humankind?

Two things: One, because they’re so like us biologically, they help me explain to the general public and to scientists that there isn't a lot dividing us from the rest of the animal kingdom. They also force us to admit that we humans are not the only beings on the planet with personalities, minds, and, above all, emotions. They help us to be more humble and less arrogant. Specifically, they help us learn about the importance of early experience in infancy. Psychologists are completely fascinated by chimpanzee information. They are increasingly interested in how they can help us understand the first two years of our own children. In a chimpanzee’s society, as in our society, there are good mothers and bad mothers. That makes a big difference.

Since we’re talking about this new documentary, I was wondering how you document your own research when you’re out in the jungle. If you use a camera, have you captured anything especially incredible you can talk about?

We document in different ways. One way is with pencil and paper. We've always done that. Also, one of the cameramen that worked on Chimpanzee is one of our people. He has recorded amazing events in Gombe like the birth of a baby chimp.  He’s also recorded dramatic conflict between males of different communities.

You've been vocal in the past about your displeasure when chimpanzees are used as actors or bought as pets. Do you worry a film like Chimpanzee might overemphasize how cute these animals are as babies and cause more people to think they can raise them on their own?

I think it will be the opposite. Yes, Oscar is cute, but people will realize he needs to be with his own kind. Also, when you look at the behavior of the big males and see the violence during their aggressive conflicts, nobody is going to want to have a creature like that in their home. I think it will actually have a great benefit in our fight to get people to stop buying them. Hopefully, people will come to understand how amazing chimpanzees are. That, in turn, will help raise more awareness and money and help us do our work of protecting chimpanzees in Africa.