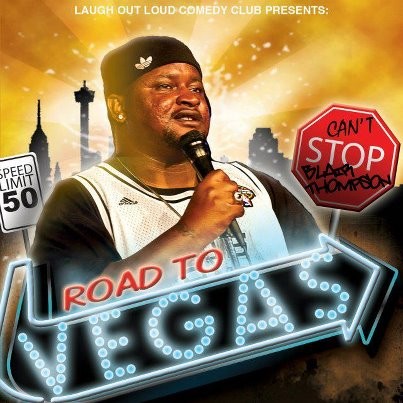 There's a duality in comedian Blair Thompson I'm not sure most people appreciate. On one side he's a black man disposed to wearing giant baggy clothes featuring a splash of color and bling that would make Jackson Pollock comment as being 'a tad too liberal.'

On the other is his act.

First impressions mean so much in stand up comedy. People judge you almost immediately based on their own expectations before you even reach the microphone. For Blair I'm sure a lot of people just assume by the giant gold letter 'B' necklace glittering from his neck that his act will be a journey of swag, weed, and trippin' bitches. Now I'm not saying Blair doesn't have some authority on those three subjects — he does and it's hilarious. What I'm saying is that as I write this, I am ... well ... I am desperately trying not write the biggest cliche writers fall into whenever they write about a black comedian.

"He's black, but it's OK — he's relatable no matter what color you are!" Or my favorite: "His humor transgresses race to a place where we all learn about ourselves no matter what background we may come from."

I don't want to write those gross cliches because it makes me feel like I'm just dancing for the white folk! High stepping so they won't dismiss a very funny comedian. No — I aint doin' that shit y'all! You get yourself some Uncle Tom Wolfe motherfucker to tap n jiggy for ya cuz I don't play that shit — WU-TANG!!!

Here's what you really need to know about comedian Blair Thompson. REAL TALK. He's a round, funny man with a giant happy face that carries a stern cool confidence telling you that at any point he can back up whatever he says. It's that duality that has made his act lush with a variety of observations and personal experiences anybody no matter what background you may come from... ahh GODDAMMIT!

Look, as a comedian trapped in San Antonio, Blair has made this scene immensely better. But like every performer who outgrows his local pond, it's time for him to start making steps to get out and move his career forward. The hard work he's put in is starting to pay off and pay off big.

After an exhausting competition among comedians from all over the nation, Blair Thompson has earned a spot at the World Series of Comedy in Las Vegas. There he will be able to perform for not just crowds and some scratch, but the opportunity to be seen by club bookers from all over the country. Which is great because as of two months ago he's finally allowed to leave the state legally.

So this Wednesday night, Laugh Out Loud Comedy Club has booked a special show with your headliner Blair Thompson plus a few comedian friends. All proceeds will be dedicated to Blair's trip because, while he absolutely earned his spot on the Vegas Competition, getting there, eating, and surviving the elements is completely his own responsibility.

If however you can't make this special event, feel free to come by the club this weekend as Blair features for national touring headliner Dov Davidoff and throw a dollar his way if you feel like supporting San Antonio comedy.