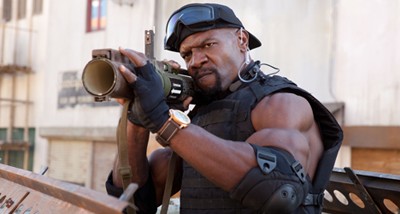 Actor Terry Crews ("Terminator Salvation") looking good behind the barrel of a bazooka in "The Expendables 2."

In The Expendables 2, actor Terry Crews (Terminator Salvation) returns to reprise his role as Hale Caesar, a barrel-weapons specialist on the hunt for a rival who has killed one of his fellow mercenaries. The film also stars Sylvester Stallone, Jean-Claude Van Damme, Bruce Willis and Arnold Schwarzenegger. During an interview with me last week, Crews, 44, talked about what Sesame Street character Hale Caesar reminds him of and which of the Expendables could kill everyone without even trying.

The Expendables 2 opens at theaters Aug. 17.

Was there ever a doubt you would come back for this sequel?

Man, I would’ve done it for free, but my agent would’ve killed me. (Laughs) I mean, you don’t ask why when Sly [Stallone] calls you and asks you to do this again. The first movie was such a big hit. It was one of the best experiences of my life. I put the hat back on like Hale Caesar usually does and it was like we never left. We all looked at each other and were like, “Dude, it feels like there was no break!” These guys are like my brothers.

Is there something specific about Hale Caesar you like?

You know, Hale Caesar is like Elmo with a gun. (Laughs) I mean, you look at Elmo and when he’s sad, he’s sad. When he’s happy, he’s happy. Hale Caesar is a very emotional guy. He’s all in the moment. He’s 100 percent pure, unbridled emotion. You feel him. When he’s happy, he’s having a great time, but when he’s pissed off, everybody better get out of the way. He would die for all of his brothers, all of the Expendables. He would be the first one to put his life on the line for them because they’re family. That’s what I think all the other members of the Expendables respect about Hale and who he is. They know he’s probably already saved their lives several times.

There's a brotherhood there.

Yeah, women bond through having fun. Men bond through pain. (Laughs) My best friend in the world, the first time we ever met, we fought each other. We've been best friends ever since. That’s just what men do. We bond over football and fighting and very uncomfortable experiences.

It’s like when guys say hi to one another, someone always gets punched in the shoulder.

Exactly! That’s why when you’re a teenager, that doesn't work if you do it to a girl. (Laughs) Teenagers are all nervous around girls. The last thing they should be doing is hitting them. Women don’t bond that way, buddy! 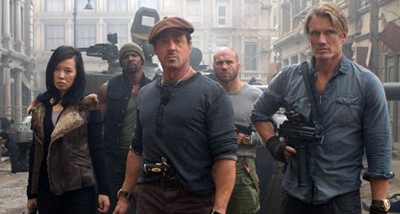 With as much testosterone as the first movie had, can we feel any extra with all the new faces in this sequel?

Ah, man. It’s bigger and better. This is the movie Sly originally wanted to make. The first movie – believe it or not – had tons of constraints. There were constraints with the scheduling and all the guys; constraints with the budget. No one knew what kind of movie it was going to be. The rumors were it was going to be a hit. But remember, Snakes on a Plane was supposed to be a hit, too. Everybody was saying it was going to be great and then when it came out everyone said, “Nah, it didn’t work.” Everyone was saying they wanted these 80s stars back, but we had to actually wait until the movie came out to determine if they really wanted them. Man, it was big. But now, with this one, we have everything we ever wanted.

And you have everyone you wanted, too, with Jean-Claude Van Damme and Chuck Norris. I remember when Sly was casting the first movie, Jean-Claude wasn't interested at all.

Well, the thing is when you’re a winner, they want you. What I love about him is the drama he has with Sly. Jean-Claude went on the record telling Sly that the first one had no story and he didn't want to do it. It became this internet thing. Now, for him to join the movie as a villain is perfect! It can’t get any better. When you see the end of this movie, when it’s Sly vs. Jean-Claude, it’s like the battle of the century everyone has been waiting for. This is Mayweather vs. Pacquiao, know what I’m saying?

Terry Crews reprises his role as Hale Caesar, a barrel-weapons specialist, in “The Expendables 2.”

So, now that you've had the opportunity to hang out with all these guys, can you tell us who the toughest out of everyone is?

Randy Couture could kill all of us. (Laughs) He’s was joking around with me one day on the set and he put me in a choke hold and I was like, “Randy stop! Randy, I can’t breathe!” That’s the kind of guy Randy is. He’s just fooling around and he could kill you. He is definitely lethal. Dolph [Lundgren] comes in second because he is a major karate champion. He’s studied martial arts for years.

Me? I look good, but I have to use a gun. (Laughs) I ain’t gonna waste time with hand-to-hand combat. I’ll shoot you.

Well, when people look at you there is an intimidating factor that comes into play. Do you think that has helped or hurt you throughout your career?

Oh, it’s who I am. It’s my gift. If I didn’t have that, I would literally be interchangeable with any other black guy. You can’t just throw me in anywhere. That's the secret of staying in this business – to be indispensable. When they put you in, what do you do? I know my gifts. I’ve worked with top comedians. I’ve done action. Now, I’m doing drama with Jeff Daniels in The Newsroom. In each of those positions, I understand my purpose. There are plenty of roles I have turned down because they didn’t serve what I wanted to say.

(From left) Sylvester Stallone, Jason Statham, and Terry Crews go on a mission in "The Expendables 2."

Do you feel like your role in The Newsroom has let you expand as an actor?

Oh, definitely. I mean, I want to do everything. I am the guy who can do reality. I started out in reality with Battle Dome. Now, I’ve gone from Old Spice commercials to doing Aaron Sorkin dialogue with The Newsroom. I want to do everything, but do it my way. I’ve already exceeded the expectations for my career. Now, I’m in uncharted territory. I can just take the time and enjoy what I do. There has never been a role I’ve taken that I didn’t want to do.

What would you say is the most sensitive thing about you?

Well, you know, I’m an artist. I’m a painter. I draw. I even played the flute for about 10 years. (Laughs) A lot of people don’t know that. That’s just me. I am an illustrator to my heart. I’ve put that love of art into my acting in regards to creating a character. I look at it as an art piece. Sly is also a great artist, too. He’s one of the best artists I’ve ever seen. He gets me a lot.