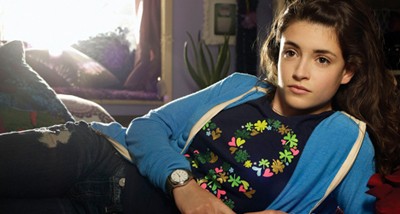 In the TV comedy series Anger Management on FX, actress Daniela Bobadilla (Desperate Housewives) stars as Sam Goodson, the 13-year-old daughter of an anger management therapist played by Charlie Sheen. During our interview, Bobadilla, 19, talked about her role on the show and why having Sheen as a father in real life would be fun.

On August 29, FX announced Anger Management would be picked up for another 90 episodes.

First off, I’m sorry about your TV show Awake getting cancelled. It was critically acclaimed and I didn’t think it deserved it. How did you feel when you got the news?

We can’t say we didn’t see it coming. We knew we were doing a really great project. We were all sad when we heard the news. Thankfully a lot of us had other projects we could jump on to. There are a few campaigns out there on Twitter to save Awake. We didn’t get the viewers, but we do have diehard fans.

I had the chance to interview Jason [Isaacs] and Wilmer [Valderrama] for the show and when I asked them if they thought the high-concept plot of Awake was going to be too much for audiences, they said no. But in fact, it looks like that’s exactly why Awake has been cancelled. Some people don’t want to have to think when they watch TV. Do you agree that is the reason it was cancelled?

I definitely think so. I don’t think there is anything else people are blaming it on. The show was at 10 p.m. [PST] on Thursdays. I know people are usually looking for a good laugh before they’re about to call it a night. Or maybe they just want to watch the news. It was definitely a smart show. It wasn’t that people weren’t smart enough to get it, I just don’t feel it was the right time for it and maybe not the right lead up.

Well, I was really nervous when I read with Charlie. I was trying not to be, but I had never met him before. I really didn’t know what to expect. But, thankfully, before I auditioned he called me out into the hallway and said, “I just wanted to talk to you like a real person before we go in there for the big, scary audition.” I was really able to put my guard down. No one had ever done that for me before. Our chemistry was there from the beginning.

You’re 19 years old, so what is it like for you to play someone six years younger?

Well, 13 is definitely an age that I thought was great. (Laughs) Now, when I look back on it, it was awful. I remember every single moment – all the drama. Now, I can kind of make fun of it. It’s so much fun to be able to go to work and be a kid. For me, I can go to work and literally goof off.

What do you remember about that age now that makes it so awful?

There was some major cattiness. I don’t know how much of it was done on my part or if I have to take responsibility for it. That was around the time I started doing more community theater, so I guess I turned in the normal school drama for theater drama. It not so much about who stole whose boyfriend as it is, “Hey, you stole my part!”

Do you think it would be fun to have Charlie Sheen as a dad in real life?

Definitely. He wouldn't be one of those parents who would sit there and say, “Oh, don’t do that. I never did that.” It’s already so much fun having him as my TV dad. He takes care of me.

Had you seen any of Charlie’s movies from early in his career?

You know, not too much. I can’t say that I’ve seen a lot of his past work other than Two and a Half Men. My mom and dad were actually pretty big fans of him and [his dad] Martin. They were able to fill me in as I auditioned for the role. They were like, “You know, he was in this, this and this.” The only movie I actually remember him from was Ferris Bueller’s Day Off. I think people forget that he was in that, but that was such a classic role. So, I always did picture him as the bad boy. It’s something that was engrained in my mind.

Of course, the media was all over Charlie these last few years because of his erratic behavior. Do you believe actors like him should get second chances like he seems to be getting with Anger Management?

Most definitely. My biggest pet peeve is when people don’t admit what they’ve done. Charlie knows what happened. He’ll talk about it if you want him to. But he’s back and he’s going to take this second chance in the best way possible. He’s not going to mess it up at all.

Since your new TV show deals with anger issues, can you tell me what makes you angry?

I get really angry when I get hungry. (Laughs) If you don’t feed me, I won’t talk to you. That’s when my anger issues come out.