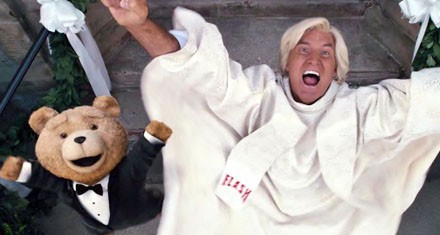 Sam Jones, who played Flash Gordon in the 1980 sci-fi movie, has a cameo in the comedy “Ted.”

Thirty-two years after saving Earth from the evil Emperor Ming the Merciless, actor Sam Jones, who played Flash Gordon in the 1980 sci-fi movie, is back to show how much his comic action hero character has become a cult icon over the last three decades. In the comedy Ted, Jones has a cameo as himself during a scene where he gets to party with Flash Gordon superfan John Bennett (Mark Wahlberg) and his anthropomorphic teddy bear.

Ted was released on DVD/Blu-ray Dec. 11.

Ted is the directorial debut of Family Guy creator Seth MacFarlane. Is Family Guy your type of humor?

Not really because I have five children. We don’t really watch a lot of TV. We’re always at some kind of sporting event or going hiking in the mountains. If we do watch TV, we watch shows on history and nature.

As a parent, do you monitor the shows they watch?

It depends on their age. I have two children who are living out of the house. One is married and one is getting ready to get married. But, yeah, I monitor what the kids see. I’m old school like that. You have to be because nowadays with the internet, you’re bringing the outside world into the house. It’s a new dynamic you have to consider as a parent.

So, out of your younger kids, how many of them have not been allowed to see Ted?

My 11 year old has not seen it. My 13 year old did but we had to close his ears a couple times.

A lot of people I know called me and said the same thing. They took all their little kids to see it because of the teddy bear. A lot of them walked out because of the offensive language. (Laughs)

Jones starred as Flash Gordon in the 1980 film.

It was a spoof; a parody I did on myself. What you saw were parts of me, but it wasn’t all of me. I just wanted to have fun with it. Seth gave us a lot of freedom. I think it worked out very well.

Did you worry that making a cameo in Ted would put you back in the spotlight or was that something you welcomed?

It really didn’t concern me at all because I’ve always been in the spotlight. Being in Flash Gordon, that’s been part of the deal. That’s part of being in the film and entertainment industry. I don’t understand why some of the major stars have an issue with that. If you are going to make movies and TV series and be successful, well, that’s the nature of the business. If you don’t want people talking to you on the street or taking your picture, don’t do any projects. I understand if there is a paparazzi being rude or pushy. That’s something I wouldn’t tolerate either, but if you’re out in public you owe it to the fans to be a kind and generous person. They are being kind and generous when they spend their money at the box office to see you.

How do you handle Flash Gordon fans who ask for an autograph or want to take a photo with you?

It’s all about timing. If I’m at dinner and I have food in my mouth, well, I’ll tell them that I’ll do it right after I finish eating. I’ve never had any issues. Maybe it’s because I’m 6’3 and 225 lbs. Sometimes I’ll be diplomatic about it. Someone will say, “Hey, you look like Flash Gordon.” I’ll say, “You know, I get that all the time!”

If Flash Gordon was remade today, who would you like to see in the title role?