‘42’: The True Story of An American Legend

Baseball is a game of tradition, ritual and, most of all, numbers — from fluctuating outfield dimensions and batting averages to home run records, numbers are all important on the diamond. But for eight decades there was one inviolable number that did not waver: zero.

That was the number of African Americans allowed to compete in the major leagues, and that unwritten but rigorously enforced “color line” was as much a part of the game as the bunt, the walk or the suicide squeeze. This widely accepted form of segregation remained in place from the 1880s until 1946, when the formidable Brooklyn Dodgers general manager Branch Rickey (played here by a feisty Harrison Ford) chose to force the issue by hiring a young standout Negro league infielder named Jack Roosevelt Robinson (Chadwick Boseman). He donned number 42 for the Dodgers and proved to be exactly the right man for the job: a sturdy, stoic and gifted athlete, Robinson had a knack for making the impossible look effortless.

Written and directed by Brian Helgeland’s (who wrote L.A Confidential), 42 is a solid, workmanlike biopic that trudges along without an excess of nuance, but with a commitment to the notion that ennobling sentiment and entertainment can co-exist. This is a handsome, competent piece of mainstream filmmaking, as rich in period detail and underdog uplift as other recent historical sports biopics like Cinderella Man and Seabiscuit, though this one has weightier issues to deal with. Race is the one demon that never really rests in this nation’s soul, but the extent of institutional, society-wide bigotry of the past may seem like a dark fantasy to modern eyes. As he made his way through the Dodgers organization, from the Montreal farm club to the big leagues, Jackie was subject to an endless stream of insults, intimidation, death threats and inside fastballs aimed at his noggin. There was even pushback from Jackie’s own teammates, who circulated a petition calling for his ouster, though Rickey flatly rejected it.

One mitigating help was Robinson’s friendship with Pee Wee Reese (Lucas Black), the Dodgers' humble Hall of Fame shortstop. When the team rolled into Cincinnati, a virtual home game for the Louisville-raised Reese; the white Pee Wee took the opportunity to publicly embrace Jackie in front of a hostile crowd, a move that stunned the critics into silence.

Through it all, Robinson displayed resilience, patience and steel, virtues that the intense Boseman expresses easily. It’s a shame that he’s hamstrung by such a saintly role, and that we don’t delve deeper into the man’s complex personality. It also would have been nice if Jackie’s beloved wife Rae (Nicole Beharie), a civil rights figure in her own right, had a bit more to do than coo and fret.

One cast member free to ham it up is Harrison Ford, who, finally allowed to act his age, blusters and grumbles with relish. Ford is a hoot as the cantankerous Rickey, a man whose religious convictions played a major role in his decisions but who was also just a tough old son of a bitch, who resented being told what to do, and who took obvious joy in agitating the cowards and fools who lined up to oppose the sport’s integration at every turn.

Robinson had to be better than the competition in every way, though the movie about him occasionally seems to be overly worried about garnishing the legend, rather than simply laying out the facts. Still, while it feels like Hollywood hoopla, there is no possible way to oversell Robinson’s real-life nobility. No athlete, and precious few other American citizens ever, shouldered a heavier burden, or did it with as much grace. 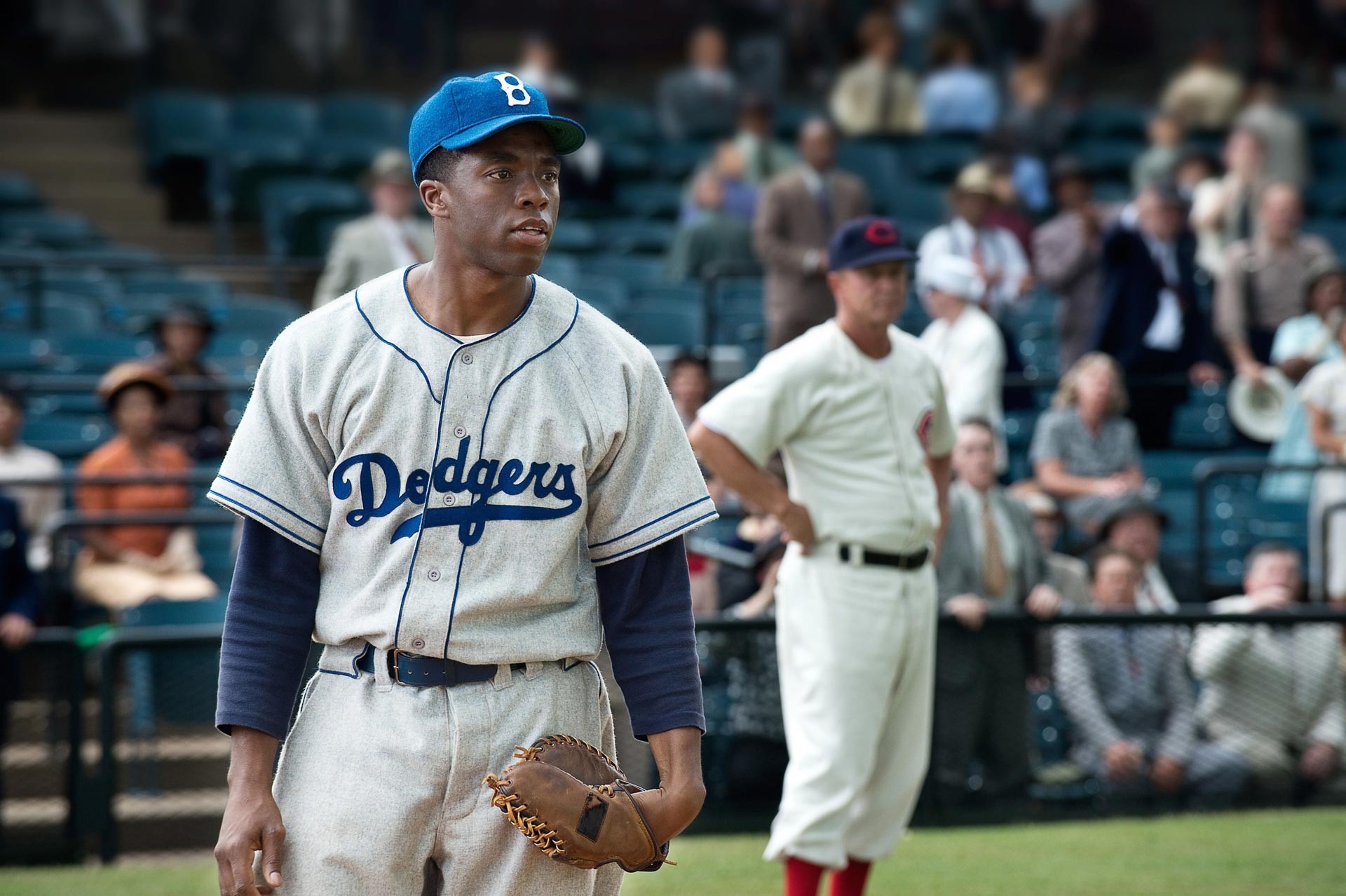