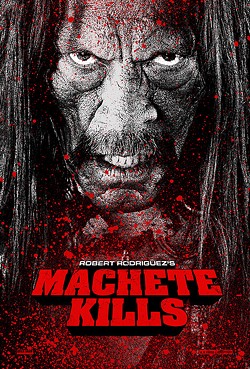 The action packed trailer for San Antonio native Robert Rodriguez' "Machete Kills" sequel has been released... and it looks fucking awesome. While not much of a plot is revealed (IMDB says: "The U.S. government recruits Machete to battle his way through Mexico in order to take down an arms dealer who looks to launch a weapon into space,") we do get to see some big names and even bigger explosions in action.

The ever gnarly Danny Trejo is back as his titular ex-Federale. Also starring are (deep breath...) Lady Gaga as La Chameleón, Cuba Gooding Jr. as El Cameleón, Alexa Vega (yes, she's the girl from Spy Kids) as KillJoy, Michelle Rodriguez is back as Luz/Shé, that crazy fucker Mel Gibson as Luther

Voz, Jessica Alba is back as Sartana, Demian Bichir as Mendez the Madman, Amber Heard AS MISS SAN ANTONIO WHAT WHAT, Sofia Vergara as a spicy/scary Latina version of Tank Girl named Madame Desdemona, Antonio Banderas as Gregorio Cortez, Vanessa Hudgens (fresh off Spring Breakers) as Cereza, William Sadler as Sheriff Doakes, Charlie Sheen- oh, excuse me- Carlos Estevez as the goddamn President of the United States, Rodriguez staples Elise and Electra Avellan as as Nurses Lisa and Mona, and many, many, many more.

This shit's gonna be crazy! What do you think of the trailer?

Editor in chief (then music editor) Callie Enlow's 2010 cover story on "Machete:" Lock Up Your Garden Tools, The Race War Is Coming

Kiko Martinez' 2010 piece: Once Upon A Time in San Antonio