All it took was one rainy day in Los Angeles for Pixar layout artist Saschka Unseld to sprout an idea. While standing outside, Unseld, who had already worked on a number of Pixar films including “Toy Story 3,” “Cars 2,” and “Brave,” noticed an umbrella that had been tossed in the gutter. 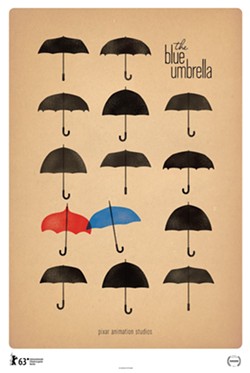 “I just stood there and looked at it,” said Unseld, who was born in Frankfurt, Germany. “It was battered and drenched. It made me feel very sad. That image just stayed with me. Then, that idea developed into a story about the umbrella and what happened to him.” Pixar executives liked the story so much, they decide to make “The Blue Umbrella” the studio’s 12th short animated film to coincide with the theatrical release of a Pixar feature. In this case, “The Blue Umbrella” will show before every screening of “Monsters University” starting June 21. In “The Blue Umbrella,” which Unseld wrote and directed, a blue umbrella faces numerous challenges during a rainstorm with the help of other inanimate objects that make up a big city. During an interview with the Current at the South by Southwest Film Festival in March, Unseld discussed how his short animation captures the spirit and emotion of Pixar films before it, and the particular process it took to make difficult decisions about the main characters’ characteristics. “The Blue Umbrella” was the most realistic looking Pixar film – short or feature – I have ever seen. Did you go into this project with the idea to make everything look that lifelike?

Saschka Unseld: Yes. It was painstakingly created by all the people on our crew. At the beginning, the intent was to make it feel like we were in a real city. I wanted there to be this magical moment when these inanimate, everyday objects come to life. That’s really something I wanted to bring to the screen. I wanted these characters to make me smile and laugh every time I looked at them. Was not identifying the city the story takes place in a conscious decision? I always pictured a big city like New York or Chicago because they have these canyons of streets. But I wanted to make sure it wasn’t a specific city. I just wanted it to be a symbol for a big city where there are masses of people on their way to work. I’ve interviewed a handful of Pixar animators over the years, and if there’s one thing they all say it’s that they want to keep the animation they create for Pixar in a “Pixar world.” But I think “Blue Umbrella” is the first Pixar film I’ve seen that doesn’t follow that same rule. Do you think your film has broken new ground for Pixar Animation Studios? I think we did just based on the excitement of all the animators. We brought characters to life with a lot of heart and emotion and connected the audience to that. Pixar can make a film stylized or cartoony or it can do it like we do with “The Blue Umbrella” and make it look real but still have the same emotional connection. It’s with the same intensity and the same amount of love and passion. It really goes back to the earlier Pixar shorts like “Luxo Jr.,” which at the time was complete photo realistic. That, too, is about an inanimate object coming to life. I’m glad you brought up “Luxo Jr.” What was the thought process when you decided to give the two umbrella characters mouths and eyes? It was the only characteristic I recognized as something that was computer generated. The character Luxo Jr. didn’t have those features. It was a very interesting process going through the design phase of that. We brought in a lot of designers to have a brainstorming session. We went through all the possibilities that could give the umbrella all the emotion and give the animators the ability to animate those emotions.

What were some of the other options? We played around with a lot of things. We thought maybe we could give the umbrellas a pattern that looked like faces. Or maybe the raindrops that fall on them form the faces. Or maybe the folds on the umbrellas form the faces. We always came back to giving the animators enough flexibility to communication the emotion of the umbrellas through their faces. If we had done that through a pattern, it would’ve restricted the animation too much. For me it was always making the umbrellas part of the photo realistic world. They are real umbrellas. They belong to real people. The faces are just the interpretation of what the umbrellas feel like. Since Pixar came into the scene in 1986, their short animated films have been nominated for 11 Oscars and won three times. The last time, however, was 12 years ago with “For the Birds.” Is that something you think about when you make a short like this – to get back to being the best in this category? Of course an award like the Oscar is a badge of honor. Everyone would be happy about it. But awards don’t come into play at all. The main thing is connecting with the audience. We had a screening the other day and I saw the audience laugh and smile at something we showed them on the screen. Sitting in the cinema is super exhilarating. People are really reacting to what you show them. That is the highest pedestal you can put us on. It’s just a pleasure to make someone happy. I love that. I loved the song that is playing throughout the short. Who was that? The song was a collaboration. It was between composer Jon Brion, who has done a lot of P.T. Anderson stuff, and the vocals are from singer/songwriter Sarah Jaffe. She is from Denton, Texas. I saw her perform a couple of years ago and there was just something in her voice, an intimacy, I fell in love with. For me, she was part of the project before I even pitched it. What do you think the umbrellas will do during the dry season to keep their relationship strong – just cuddle up in the umbrella stand? Actually, we did have some fun drawings of the blue and red umbrella in an umbrella stand kind of cuddling with each other. A lot of people have asked us if there are going to be tiny purple umbrellas someday.