'The Exorcist': still scary after 40 years

For most of cinema’s history, the horror genre existed at the fringes of more popular fare. Universal Studios had much financial success with early monster films such as Dracula and Frankenstein, but great actors like Bela Lugosi and Boris Karloff never received the accolades for their work in these films that they would have had they focused their talents on other projects. William Friedkin’s adaptation of William Peter Blatty’s novel The Exorcist, which premiered on June 19, 1973, broke this glass ceiling by winning two Academy Awards and receiving eight other nominations, a groundbreaking first for the horror genre, and would not be bested in terms of Academy recognition until The Silence of the Lambs debuted almost two decades later.

What did Friedkin do right? People who have only seen clips of The Exorcist’s most famous moments may be surprised that the first half of the film’s 122-minute run time is very dialogue-heavy. While the scenes with Linda Blair projectile-vomiting and spider-walking downstairs are fun to watch out of context, the time that Friedkin spends building sympathy for the main characters makes those situations much more frightening. The struggle with the demon means something different for each protagonist: for Chris McNeil, Regan’s mother and a staunch atheist, it’s about saving her daughter; for Father Merrin, an experienced exorcist, it’s a personal vendetta; for Father Karras, a priest who has lost his faith after his mother’s death, it’s a challenge to his beliefs about good and evil. Audience members would be hard pressed not to find at least one character that they can identify with.

Of course, the film is most known for resetting the limits for what is appropriate to do and say on camera. Religion was still a touchy subject for the film industry in 1973, but The Exorcist skipped the touching and went straight for stone throwing. Friedkin’s screenplay includes nearly every blasphemous line from Blatty’s book, which is often enough to make a Satanist blush. Many critics dismissed the film as shock piece only to later realize the film's artist merits when such language became more commonplace in other films.

The true driver of a horror film is the antagonist, and Linda Blair gives the performance of a lifetime in her portrayal of the possessed victim. What’s most frightening about the demon is its methodology and lack of motive beyond pure sadism. It only kills two people throughout the film, and both deaths occur off camera. Instead of relying on strength, the demon prefers psychological attacks, so it impersonates the voices of dead loved ones and spews insults. When Karras first sees the demon strapped to Reagan’s bedpost and asks the obvious question, “If you’re the Devil, then why don’t you make the straps disappear?” the demon responds with a snarky, “That would be far too vulgar a display of power.” Considering the demon’s telekinetic abilities, there doesn’t seem to be anything holding the demon down other than the pleasure it gets out of torturing the other characters.

Young audiences may not consider The Exorcist to be “the scariest movie of all time,” as the tagline for the film’s 2000 theatrical re-release claimed. Nevertheless, The Exorcist remains the highest grossing R-rated film of all time when adjusted for inflation, and true horror lovers time and again return to be scared all over again by the film that started it all. Movies like The Last Exorcism and The Exorcism of Emily Rose (not to mention the less-than-stellar The Exorcist II and III) have tried to capitalize on their predecessor’s popularity, but The Exorcist is effective because it is about more than demonic possession; it’s a story about the nature of faith and how different people respond to inexplicable events.

Alex Smith is a freelance television and film blogger for DirectTVDeal.com. A lifelong horror fan, he particularly enjoys classics from the '70s and slasher flicks, but always comes back to The Exorcist when he needs a good, solid scare. 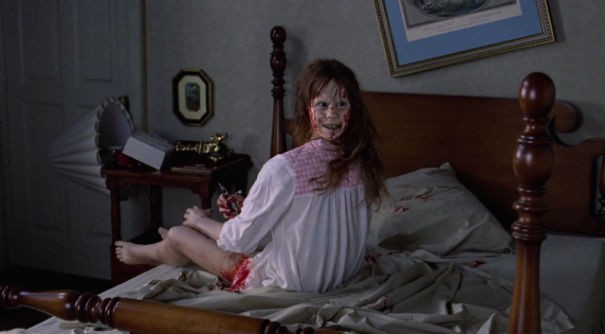