Analog is Not Dead #4: All black and white 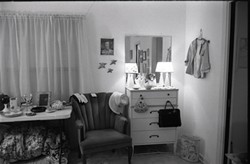 I have been exclusively been using Fuji film products and their color darkroom paper to print my color photographs. I have been using their neopan 400 black and white film and have been happy with the results.  So for this blog I have been shooting a roll of film and trying to tell a story of what happened during that roll. Usually I shoot a roll of 36 exposures, but only part of it is shown here, the other photos were of a documentary shoot and will be used to promote that film. Super stoked on that. So I'm still trying to visit estate sales on a weekly basis, it's proving to be difficult to keep up with it, but I’m going to keep going to them.  I hope you guys are enjoying these posts.  Please leave comments if you are, I’m sure the dudes at the Current would like to hear what you think.

Usually they have all the bathroom items strewn all over the place, but this one was pretty much empty. 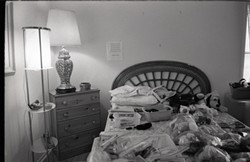 I don't crop these photos, I usually post full frame shots, and the only editing I do is dust removal in Photoshop.

It's so random what is scattered in these rooms. I think I'm going to stick with color film for these shots, there's so many different colors and textures you can't really feel with black and white film, but I still like these shots a lot.

My friend told me about this cool house atop of a hill heading north on Bandera Rd.  So we went out to find the house but ended up finding this cemetery instead. It was nestled in a hill country neighborhood. We drove up this hill and there was a fork in the road and the owners of the property were out there building a play gym thingy for their kids and it was really awkward, so I just asked if we could photograph the cemetery and never really got to the house on the hill.

So my friend Jennifer Dobberton had her birthday party at the old Hot Wells estate.  My good friend Justin lives there in a shipping container converted to a residence. You can learn more about the old Hot Well hotel here. 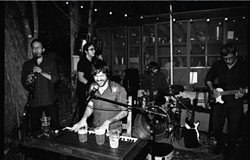 Cryin' D.T. Buffkin & the Bad Breath played the party and you can check em out here.

I had my Polaroid 100 land camera and shot this with some Fuji 3000b. It’s tricky to get the flash distance right.

There's also a hot sulfur spring there too.  I didn't want to smell like egg farts so I just took this photo of Melanie and Kemp Davis. Sulfur is supposed to be really good for your skin. This is a natural spring and it's constantly flowing.

My friend Sam Lerma was doing a test shoot for his new short film he's working on. I did the boom mic work on the shoot and it was fun to see the makeup they used on the main character in this scene. Can't give much away about it but seems like it’s going to be cool.

Hadn't been to The Mix in a while. Probably since the days when you could still smoke in bars here in San Antonio. I remember going to that place and coming home smelling like a dirty ashtray and having to shower to get the smell off.  gross. So anyways, I usually take photos of street people so photos like these two are more of what I usually shoot.

Her eyebrows were awesome; they were kind enough to let me take this photo.

Well that's all I have for this post. I'm already working on the next one till next time.

'ANALOG IS NOT DEAD' ARCHIVES

ArtSlut photography analog is not dead