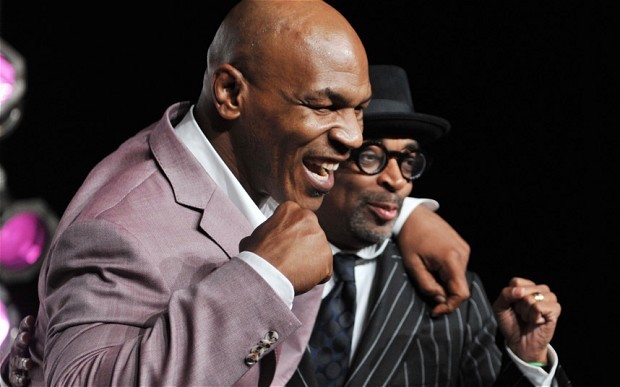 Lee took over the show, written by Tyson’s wife Kiki, after an April 2012 opening in Las Vegas. It premiered on Broadway that August and the immediate reaction was mixed: Tyson showed “a clumsiness startling to see on a Broadway stage,” wrote The New York Times about the August 1 premiere at Longacre Theater. But Tyson and Lee went on, and Tyson kept getting better and better. By the time Lee was ready to film the show for HBO broadcast, Tyson was on fire: on July, and after a successful national tour, Lee filmed an “Iron Mike” as he has never been seen before: funny, confident, articulate, and moving. You see flashbacks of the old furious Mike, but it is Mike now poking fun at himself and making fun of others, most notably his street encounters with former heavyweight contender Mitch Green, former wife Robin Givens, and promoter Don King. But his criticisms are not based on anger, but humor and, as the show’s title indicates, Tyson’s “undisputed truth.”

Yes, he still claims he “didn’t rape Desiree Washington” and blames a poor defense (he calls star attorney Vincent Fuller “a goddamn tax attorney”) on him being convicted “before the trial even started.”

The show mixes elements of stand-up comedy and sound/light experiments à la Spalding Gray’s Monster in a Box and Swimming to Cambodia. And, no matter what’s your take on Tyson (or even Spike Lee), Undisputed Truth is a must-see that shows one of the world’s most important sports and cultural figures in a most revelatory way. This is Tyson’s take on Tyson, a man who came from nothing, got it all, lost it, and who is back to thank and share with us the words of his late mentor Cus D’Amato.

You add up all the fights, that’s like 1500 fights. I gave up right there. I said, ‘Cus, I could never be like them, I can’t do this.’ Then he looked at me in the eye and said [doing an impression of D’Amato], ‘Mike, you gotta read the whole records

We never hear any more about the guys that they knocked out... Know why, Mike? ’Cause at one point someone knocked them out

But these men you’re reading about, these champs, they never quit. They never got discouraged, you know? And that’s why these [other] guys—their demons will follow them forever, Mike. ’Cause they had a chance to face their demons and they didn’t