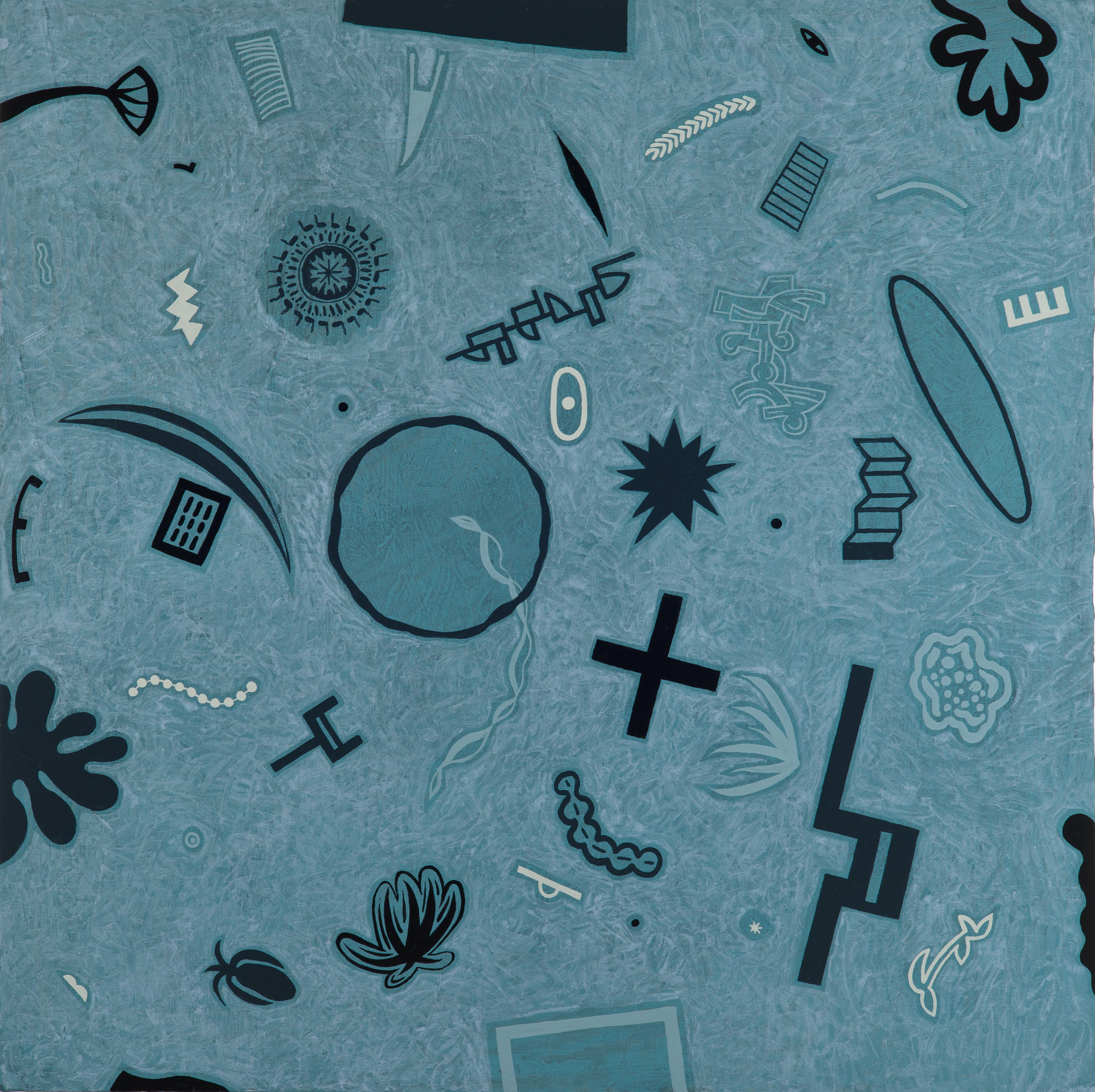 Paula Owen is best known as the calm, cool, collected president of the Southwest School of Art, but at heart she’s an artist. During her 18-year tenure, the art administrator has more than doubled the operating budget, total assets, enrollment and facilities of the newly BFA-granting institution she heads, but she has never abandoned the sanctuary of the studio. In “Vague Chatter” at the REM Gallery, she’s created a whole new visual language of signs and symbols that might be drifting in the slipstream of consciousness. Experimenting with various textures in a subdued palette reflecting her Scandinavian roots, she floods the surface of her paintings and mixed-media works with small organic and geometric forms, influenced by everything from doodling to hieroglyphics, yet unlike any symbols you might recognize. “I gave myself an exciting challenge: to try to make something new and interesting, yet which still evoked something,” Owen says. However, it’s up to the viewer to decipher the semiotics of her imaginary symbols. Chaos theory, which describes the complex and elegant patterns emerging from non-linear dynamic systems, has long fascinated Owen, especially the “strange attractors” that govern movements of everything from flocks of birds to the formation of sand dunes. In her artist’s statement, Owen says “the sublime is sometimes found in the equilibrium that can emerge out of seeming chaos.” Her invented symbols refer to both our “pixilated” world and the interior realm of the mind. Floating over neutral backgrounds like thought clouds, the shimmering curtain of symbols reflect her desire to “create harmonic patterns out of incongruent fragments.” She often uses a two-sided diptych approach to show the incoherent aspects of a person’s life, the parts they try to fit together but never quite integrate. Vague Chatter, the titular piece and the largest work in the show, is a diptych divided down the middle into a light greyish green half and a darker, moodier forest green side. Almost as if they were hovering just above the picture plane, similar to computerized holograms popping up in movies, are vaguely familiar yet mysterious forms drawn from both the natural and man-made worlds–seeds, feathers, targets, circles, ladders and arabesques suggesting foliage, tendrils or tree limbs. Owen compares them to the swarm of invisible information that streams through our consciousness constantly. The actual surface of the canvas is uneven, looking like aged, cracked plaster, as if the piece is part of an ancient fresco cut out of a wall, a relic of a forgotten age. The surface is even more cracked and volcanic in the painterly Bruised Flutter, which resembles a Hubble telescope image of distant red suns engulfed in a giant gas cloud swirling around a black hole in a far-flung nebula. Running like tiny rivulets across the surface are cracks and crevices that might be derived from graffiti marks. She piles up thick layers of paint and molding paste to create the three-dimensional texture. Owen’s deft use of materials reflects the delicate balancing act she has achieved at the Southwest School, blending down-to-earth craft techniques with the more intellectual pursuits of contemporary art. In person, she’s serene and unflappable, but Owen has a sharp sense of humor. Drift Akimbo #1 has a warmly familiar cartoonish quality, like reading the yellowed comic pages in an old newspaper, sprinkled with bomb bursts, eyes, comets and fireworks, but these are cartoons you’ve never seen before. Most of the works in the show deal with the present-moment reality in front of and behind your face, but two pieces appear poised on the edge of the timeless cosmic abyss. Nomadic Scan is like looking at the night sky through a powerful telescope with pin-wheeling galaxies spiraling through endless space. A mysterious mandala floats through Scattered Galaxy along with architectural forms and simple organic shapes. Both pieces have a nocturnal feel, heightened by the blackish gray color scheme—shades of a starlit night. But these works open a window on to infinity, a universe without boundaries far removed from the more everyday reality of the rest of the show. In the future, Owen hopes to expand on collages in the Artifacts series that’s she’s made with lists she keeps of things to do and remember. The meticulous hand-written lists on white and yellow paper are cut up and combined with other office clutter and tools such as rulers and triangles to form compositions that function like the geometric constructions of a busy mind. Out of the vague chatter of endless staff and board meetings, Owen says she hopes to one day create a room-size installation. Owen may be one of the most successful art administrators in the city, but she’s also one of the most compulsively creative artists.   Paula Owen: Vague Chatter Free Noon-6pm Fri-Sat REM Gallery 219 E Park (210) 224-1227 remgallery.com Through April 25