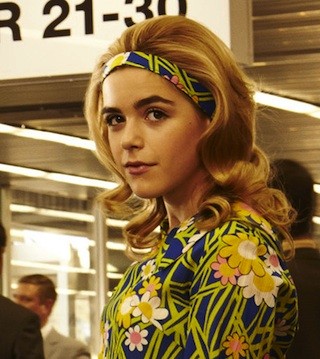 Sally Draper, perhaps she can find the real Don Draper

It's All in “A Day's Work”: Promotions, Power Struggles and Reality Checks

“Liberation has left everyone in an undefined state (it is always the same: once you are liberated, you are forced to ask who you are).” -Jean Baudrillard, America

The first episode in this seventh and final season of AMC's Mad Men ends with Don Draper out in the literal and metaphorical cold, staring into the abyss of a life built from lies, a life that's rapidly losing meaning and joy. Episode two, “A Day's Work,” begins with a still jobless Don waking up after lunchtime to an alarm clock that he's still pretending to need and surveying his apartment to find it in a similar state of filthiness and disrepair as the rest of his life.

He's moping about, marking his liquor bottles to monitor his consumption, watching TV absent-mindedly and is surprised out of his stupor by a cockroach, reminding him that this is rock bottom and he probably shouldn't get too comfortable with it. After he cleans himself up a bit, we find out that Dawn (his secretary from SC&P) is secretly spying on his estranged co-workers for him, as well as ordering flowers for his wife (the episode takes place on Valentine's Day) and scheduling cleaning for his apartment. We get the feeling from their brief meeting that Don is desperate for companionship and (with Megan in Cali) in dire need of a woman to anchor his home life. More on Dawn later.

Don's most important scenes in this episode involve a lunch meeting with Dave from Wells, Rich, and Green (a rival agency) and a few alternately excruciating and heartwarming moments with his teenage daughter Sally. The scenes at lunch with the competition are mainly important in that they prove that people are starting to talk about Don's absence from SC&P in the ad world and that at least two other top agencies would still love to have Don in their midst. These are poignant moments, where you can see the wheels turning in Draper's head as he calculates the damage done to his reputation and what his next move should be.

The storyline with Sally is arguably the episode's most compelling. On a funeral-excused trip from her boarding school, Sally ends up losing her purse while stepping out in the city. Desperate for help, she shows up at SC&P and is surprised (and kinda crushed) to find out that Don isn't there and some douchebag (Lou Avery) is in his office. Ambushing him at his apartment and acquiescing to his offer to drive her home, Sally holds back on telling him about her visit to his former place of business until, after a prolonged period of awkward silence and Don's forced dad act, he reveals that he already knows and questions her about what she was really up to.

Finally, in an idyllic diner setting, Don's admits that he's been placed on leave for losing his cool and being honest about the wrong things at the wrong time. He admits very plainly that he's been embarrassed and that he really has no idea what to do. This is huge step for Don, who normally guards his motives and his moves pretty closely. For once our protagonist feels free to be vulnerable and unsure. Though the two talk a little more seriously after this breakthrough, there's an absolutely crushing look of doubt/love/relief on Don's face as he drops Sally off and she hurriedly says “Happy Valentine's Day. I love you.” It is the look of a man who has found the freedom to be himself, faced with the joy and pain of trying to figure out what that means.

Back at the old offices of SC&P (NY and LA), things are as volatile as ever. Pete scores a big gig with some SoCal Chevy dealers association, only to find himself predictably neutered by Jim Cutler back in NY, who insists that all Pete's business with the dealers has to go through Bob Benson in Detroit. But, at least 'ol Petey seems to have an interesting love life now and gets in a sweet line comparing Jim to Machiavelli. Meanwhile, it has become apparent that Jim sees Roger as a target, and we see Roger in rare placating form as the two discuss Pete's Chevy dealers deal. Peggy continues to unravel, traveling further and further away from that promising scene near the end of season six where she appeared in Don's office, possibly (we hoped) poised to inherit his crown of thorns. A misunderstanding about the sender and intended recipient of a dozen roses, leads Peggy to embarrass herself and alienate several co-workers in the process. It is as painfully evident as ever that Peggy needs to find a way of establishing closeness with people outside of work or else she's bound to become increasingly combustible.

Both Joan and Dawn experience successes in this episode and both after going through considerable bullshit. Joan, ever more active in accounts (particularly Avon and Butler Shoes), finally get's relieved of her administrative duties as head of personnel and an office worthy of her role in SC&P. And Dawn, who was victim to Jim's jealous hatred of Don and Burt Cooper's racism in this episode, gets Joan's old job as head of personnel.

Everyone is going up or going down. And as the elevators continue departing, we'll find out the extent to which these characters are capable of reinventing themselves in new contexts and positioning themselves anew in relation to the things that once defined them.

Be sure to check back next Monday for a recap of Season 7, Episode 3.