San Antonio-based artists Vincent Valdez and Cathy Cunningham-Little will discuss their work at the opening of their exhibitions. Artpace's Hudson (Show)Room will feature Valdez's work, Strangest Fruit, sponsored in part by Belinda Valera Molina. Cunningham-Little's work, Encounter, will be displayed in the Window Works room.

Driven home by exhibition titles such as “El Corrido de el Super Taco Gone Bad,” local artist Cruz Ortiz has a distinct way with words—and text plays a significant role in his works, which are often informed by “growing up in the bicultural landscape of South Texas.” Known best for prints and paintings, Ortiz takes a rasquache approach to contemporary art while nodding to diverse influences (José Guadalupe Posada, Mexican sign painters, The Smiths, etc.). Ortiz’s most recent accomplishments include Hecho Farm (a “super fantastic multi-purpose urban design effort for humans” he launched at UT) and the design for the Absolut Texas bottle (adorned with a “cosmic caballero” cowboy boot). The Guadalupe unveils his latest at a reception with music by DJ Bonnie Cisneros, a Frito pie bar and cocktails courtesy of Absolut. 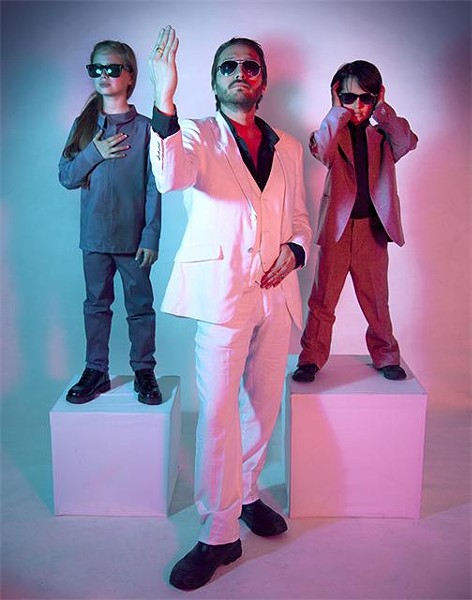 When it comes to viral success stories, it might not get any cuter than DMK, a Bogotá-based “trinket synthpop” tribute to Depeche Mode. Comprised of Colombian-American video artist Dicken Shrader (“the old one”) and his young children Milah (“the cute one”) and Korben (“the rebel”), the trio takes an adorably inventive approach to music, adding instruments like kazoo, melodica, recorder and maracas (not to mention household items like frying pans, buckets, cheese graters and soda bottles) to covers carried by vocals, keyboard and xylophone. Launched in 2010, DMK—which is an acronym for the members’ first initials as well as Depeche Mode Kids—started out with 1985’s “Shake the Disease” and struck a chord the following year with its rendition of 1983’s “Everything Counts.” In addition to landing on the blogs of Perez Hilton and Oprah, the video caught the attention of CNN, The Guardian and Huffington Post and currently boasts more than 3 million views on YouTube. Before joining the likes of Julieta Venegas and La Santa Cecilia at Austin’s ¡Pachanga! Latino Music Festival, DMK performs its first concert outside Colombia, closing out Échale’s spring series on a bill with Mexico-based headliners Sonido San Francisco and Brooklyn’s Chicha Libre.

This event is themed around the Olympics and the amazing champions birds are. Special activities will include a Roadrunner Race, Pelican Plop, and Tern Toss. This free, family-friendly and fun-filled day has something for everyone. There will be bird walks, bird games, bird activities, bird displays and more. As part of a 5-location, city-wide partnership with SA Zoo, Sea World, SA River Authority, and Govt. Canyon SP, International Migratory Bird Day will be a day like no other.

Commemorating the 145th anniversary of the completion of the Trans-continental railroad on May 10, 1869, National Train Day celebrates the importance and heritage of railroading in America and South Texas. There will be displays and presentations from Alamo City Community Marching Band, Amtrak, National Park Service Trails & Rails, New Braunfels Railroad Museum, San Antonio Railroad Heritage Museum, and Texas LEGO User Group.

Learn about the beautiful butterflies of the Texas Hill Country, including the majestic monarch butterfly, during the celebration of these colorful insects. Butterfly experts and enthusiasts will give presentations and display live butterflies, and children will have a chance to make butterfly crafts to take home. The event is sponsored by the Cibolo Nature Center & Farm.

Want to see a steamroller take up an entire street to create large-scale prints? Art To The Third Power has put on just the block party for you. Along with San Anto Cultural Arts and  printers Kim Bishop, Paul Karam, and Luis Valderas, this steamrolling, printmaking block party will include live music and interactive booths with various local artists and printmakers.

Family Flicks: Where the Wild Things Are

Director Spike Jonze adapted Maurice Sendak's classic children's story, where Max, a disobedient little boy sent to bed without his supper, creates his own world - a forest inhabited by ferocious wild creatures who crown Max as their ruler. Bring your lawn chairs, blankets, and picnic supplies to the Current critic's pick for "Best Outdoor Place to See a Movie."