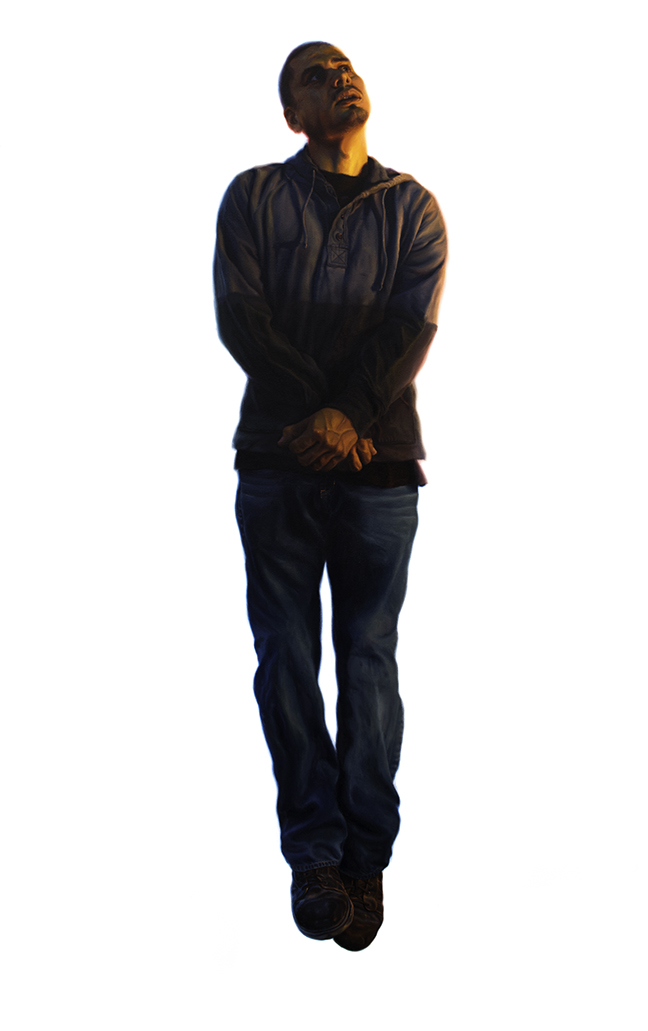 Named after the  Abel Meripool poem and song "Strange Fruit" (which was written in protest to 1930s-era lynchings and popularized by Billy Holiday's recording in 1939), local artist Vincent Valdez's large-scale portrait series The Strangest Fruit brings the lost/erased history of lynched Mexicans and Mexican-Americans in Texas into a contemporary context. Previously exhibited at David Winton Bell Gallery at Brown University, Valdez's exhibition opens concurrently with light wizard Cathy Cunnigham-Little's Window Works installation "Within the Angles of Incidence." The opening reception includes a discussion with Valdez and Cunnighmam-Little (7 p.m.), to be followed by a Q&A. Free, 6-9pm Thursday, Artpace, 445 N Main, (210) 212-4900, artpace.org. On view through August 31. —Bryan Rindfuss 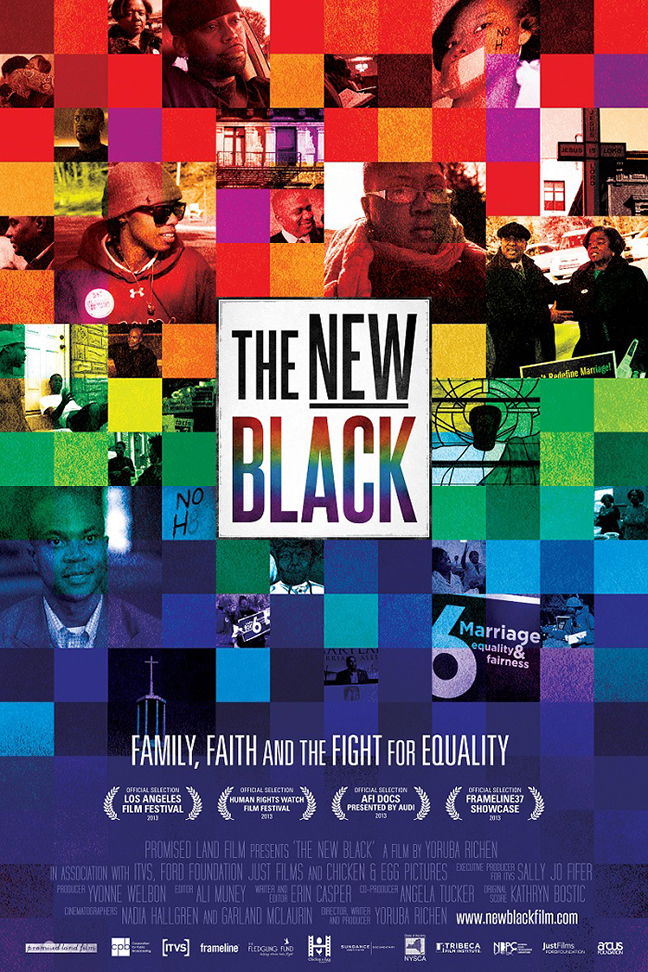 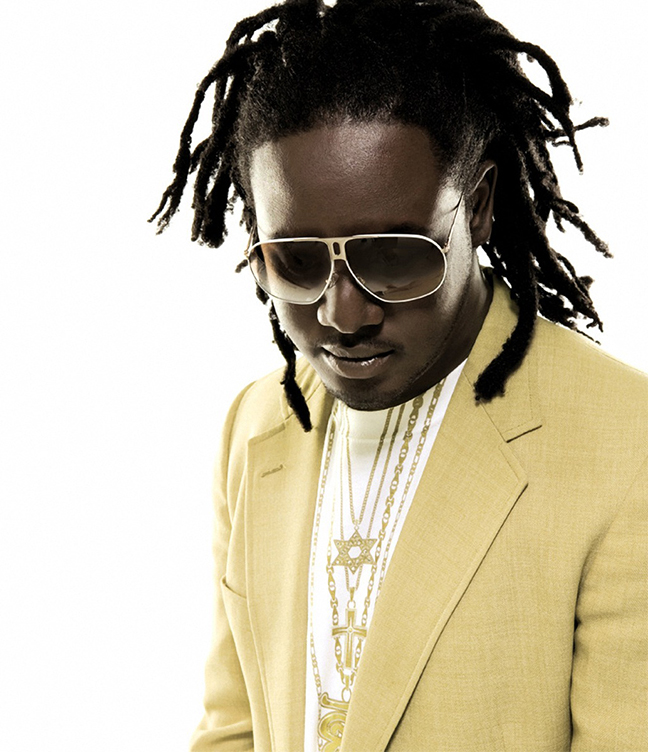 When Kanye West picked up Antares Audio Technologies’ auto-tune feature as an actual instrument on 808s & Heartbreak and My Beautiful Dark Twisted Fantasy, T-Pain’s auto-tune-soaked career plummeted about as fast as you can say M. Night Shyamalan. First employed on Cher’s 1998 single “Believe,” auto-tune became T-Pain’s signature sound on club-centric bangers like “Buy You a Drink,” “I’m In Love With a Stripper,” and later, the self-parodying “I’m On a Boat.” Though he ate some critical and popular shit—see Jay Z’s “D.O.A. (Death of Auto-tune)”—for relying on the plugin as his crutch, thanks to a recent New Yorker profile, T-Pain can be called an engineer of 21st Century party-pop, the man who introduced a new, malleable toy to Top 40. With his 2014 effort, the sincerely titled Stoicville: The Phoenix, T-Pain dropped his bad Mad Hatter hat, but proudly maintained the auto-tune to make his rise back on the charts. With Young Dro and Major Money. $27.37-$64.29, 9:30pm Thursday, El Fuerte, 7011 San Pedro, (512) 400-5555, tpaindro.eventbrite.com. —Matt Stieb 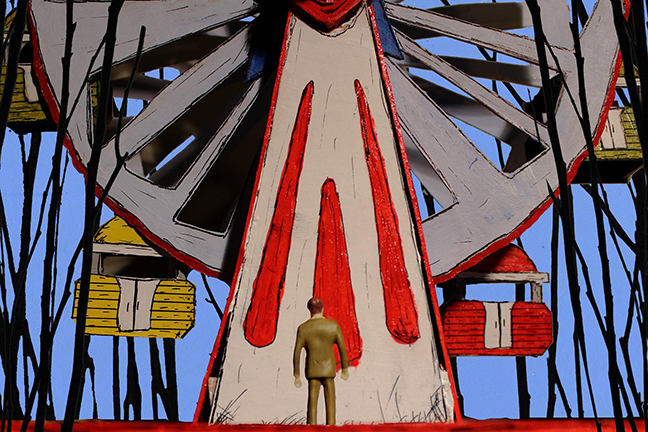 Since passing through town last summer on a 17-city tour, the puppet troupe Miniature Curiosa has relocated to San Antonio and is currently in residence at S.M.A.R.T. Formerly based in Pittsburgh, the two-person outfit (Zach Dorn and Murphi Cook) combines elements of Victorian toy theater, storytelling and projection technology in productions revisiting “the underbelly of childhood nostalgia with the disappointed eyeballs of adulthood.” Premiered in St. Petersburg, Fla., as part of the roving endeavor “5 Cities, 5 Plays, 555 Days,” Miniature Curiosa’s Moon City: An Ahistoric Tale Regarding a Historic Man in a Swamp follows a fellow named Frederick Ingersoll into a realm that squeezes “an entire amusement park into less than 10 feet of space.” $10 (includes two complimentary beverages and a snack), 8pm Thursday-Friday, 8pm & 10pm Saturday, S.M.A.R.T. Project Space, 1906 S Flores, miniaturecuriosa.com. —BR 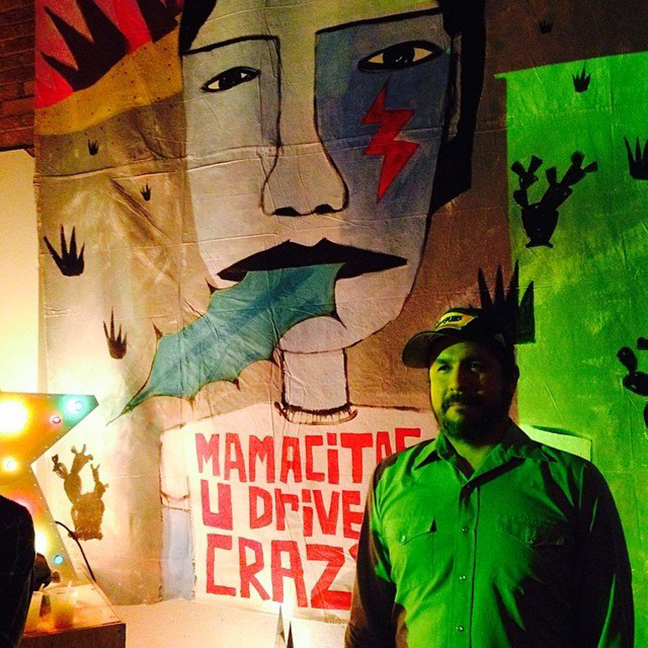 Driven home by exhibition titles such as “El Corrido de el Super Taco Gone Bad,” local artist Cruz Ortiz has a distinct way with words—and text plays a significant role in his works, which are often informed by “growing up in the bicultural landscape of South Texas.” Known best for prints and paintings, Ortiz takes a rasquache approach to contemporary art while nodding to diverse influences (José Guadalupe Posada, Mexican sign painters, The Smiths, etc.). Ortiz’s most recent accomplishments include Hecho Farm (a “super fantastic multi-purpose urban design effort for humans” he launched at UT) and the design for the Absolut Texas bottle (adorned with a “cosmic caballero” cowboy boot). The Guadalupe unveils his latest at a reception with music by DJ Bonnie Cisneros, a Frito pie bar and  cocktails courtesy of Absolut. Free, 6-9pm Friday, Guadalupe Gallery (inside Guadalupe Theater), 1301 Guadalupe, (210) 271-3151, guadalupeculturalarts.org. —BR 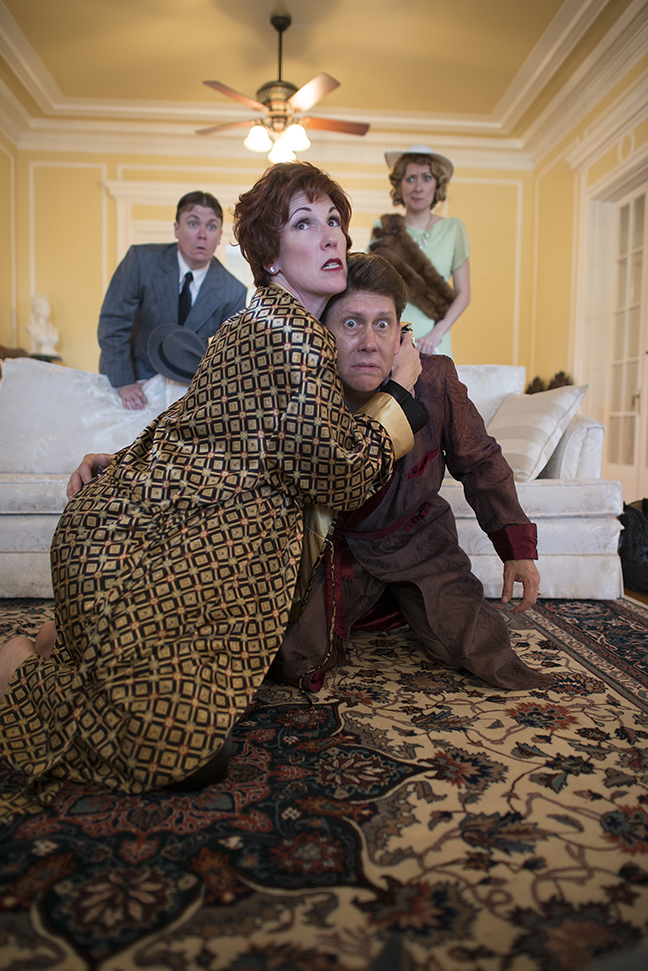 A look back at the life of actor, writer, composer, painter and trendsetter Noël Coward is enough to make anyone feel like an underachiever. Born in the London suburbs in 1899, Coward took to the stage at the age of six, wrote his first play as a teen and rocked the theater world with 1924’s The Vortex—a racy drama touching on adultery, homosexuality and drug abuse. By the time he’d written Private Lives, Coward was the highest paid author in the Western world. Brought to life over the decades by the likes of Sir John Gielgud, Richard Burton, Elizabeth Taylor and Kim Cattrall, the comedy of errors follows a pair of newlyweds to a French resort where they share a balcony with their honeymooning exes. The Classic Theatre revives this quintessential classic from a gay icon who’s been called both the “first Brit pop star” and the inventor of “Englishness for the 20th century.” $10-$25, 8pm Friday-Saturday, 3pm Sunday, Woodlawn Theatre, 1924 Fredericksburg, (210) 589-8450, classictheatre.org. —BR 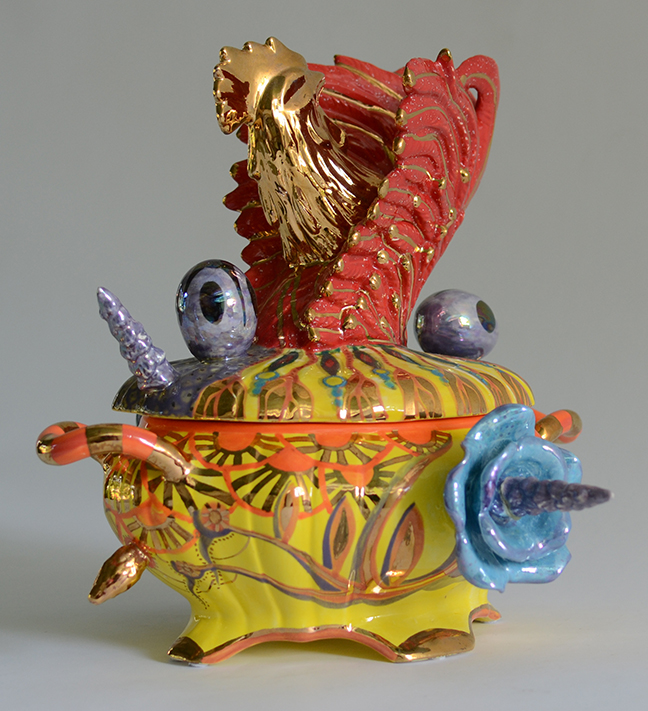 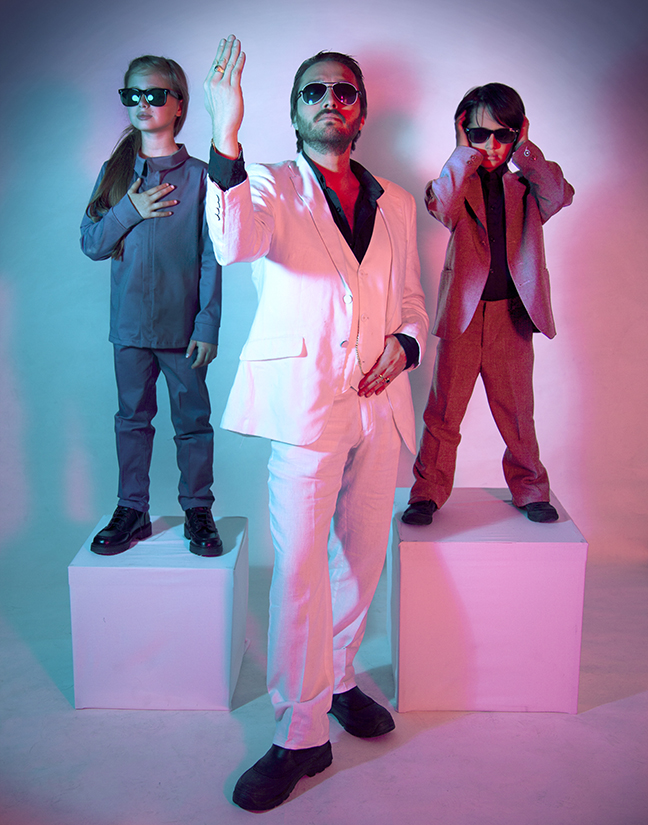 When it comes to viral success stories, it might not get any cuter than DMK, a Bogotá-based “trinket synthpop” tribute to Depeche Mode. Comprised of Colombian-American video artist Dicken Shrader (“the old one”) and his young children Milah (“the cute one”) and Korben (“the rebel”), the trio takes an adorably inventive approach to music, adding instruments like kazoo, melodica, recorder and maracas (not to mention household items like frying pans, buckets, cheese graters and soda bottles) to covers carried by vocals, keyboard and xylophone. Launched in 2010, DMK—which is an acronym for the members’ first initials as well as Depeche Mode Kids—started out with 1985’s “Shake the Disease” and struck a chord the following year with its rendition of 1983’s “Everything Counts.” In addition to landing on the blogs of Perez Hilton and Oprah, the video caught the attention of CNN, The Guardian and Huffington Post and currently boasts more than 3 million views on YouTube. Before joining the likes of Julieta Venegas and La Santa Cecilia at Austin’s ¡Pachanga! Latino Music Festival, DMK performs its first concert outside Colombia, closing out Échale’s spring series on a bill with Mexico-based headliners Sonido San Francisco and Brooklyn’s Chicha Libre. Free, 7pm Friday, Pearl Amphitheater, 100 E Grayson, (210) 212-7260, pearlechale.com. —BR 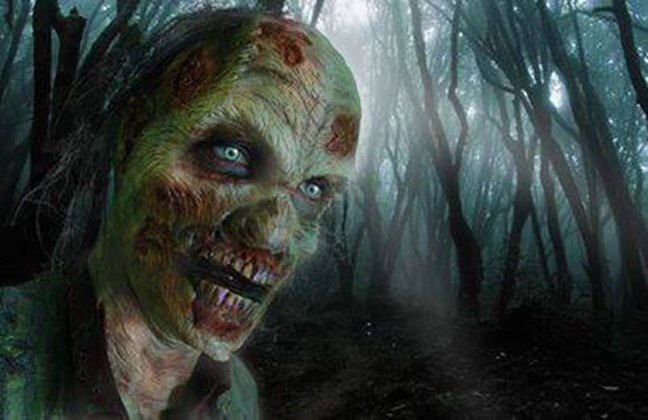 Oh my God, what’s that behind you? Probably nothing, but if you were secretly hoping to see an amateur actor made up like a rotting reanimated corpse you could fire a fake gun at, good news. The folks at 13th Floor—in their ongoing effort to make that magic Halloween feeling of crying in front of your date and trying to pretend you didn’t just pee a little last the whole year ’round—invite us to fight “through ravaged buildings overrun with zombies” using “state-of-the-art weapons” replicating the “live bang, recoil and muzzle flash” of real-deal m.f.-ing guns. And don’t worry—the zombies will be equipped with targets designed to track your kill stats. Recreationally hunting man for sport has probably never been this affordable. $24.99-$44.99, 6-10pm Friday, noon-4pm & 6-10pm Saturday, 6-10pm Sunday, 13th Floor Haunted House, 1203 E Commerce, (210) 338-0382, reservations required at 13thfloorsanantonio.com. —Jeremy Martin 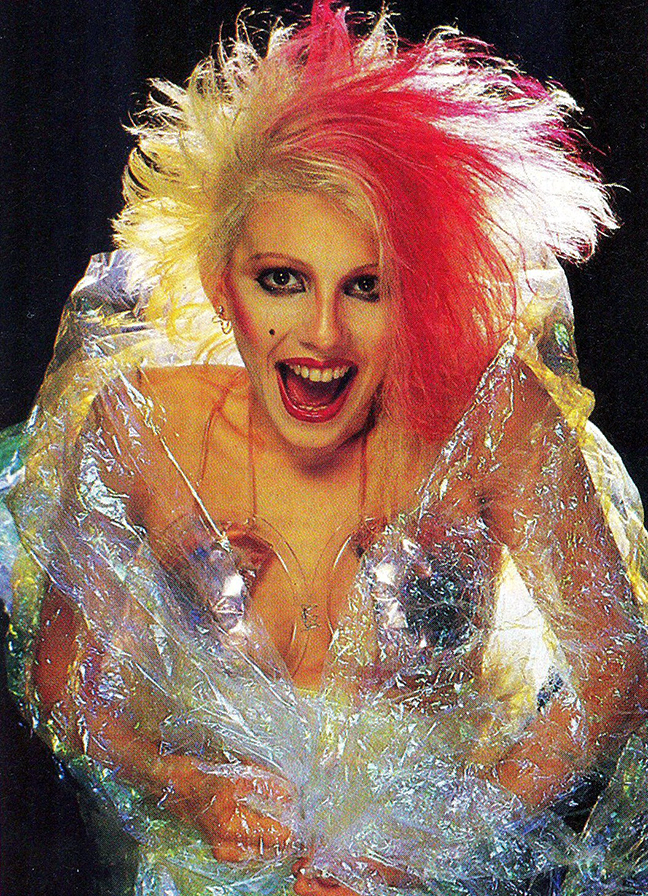 Greek philosopher Heraclitus said, “No man ever steps in the same river twice, for it’s not the same river and he’s not the same man.” On the other hand, Bow Wow Wow—one-third of that famed and universally-agreed-upon trinity of ultimate ’80s bands—argues, “I want candy. I want candy. I want candy.” To put it another way, if you go see Bow Wow Wow (as in, original bass player Leigh Gorman and a lineup of musicians hired in 2012), Gene Loves Jezebel (the one headed by Michael Aston, not the competing version featuring twin brother Jay), and Missing Persons (former Playboy Bunny/front-woman Dale Bozzio minus the original group that included former husband and Frank Zappa drummer Terry Bozzio—no word as to whether “Punky’s Whips” was cited in the divorce) play “the hits” and you’re drunk and your shoes still get wet, do you really give a shit? $15, 7pm Saturday, Backstage Live, 1305 E Houston, (210) 229-1988, backstagelivesa.com. —JM