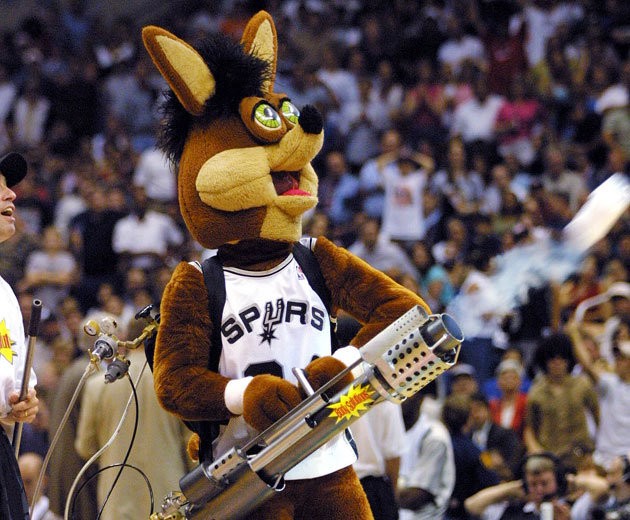 The Spurs Coyote showing off his toy.

Though the block of colors that are OKC fans will receive the fare of t-shirt cannons for games three and four of the Western Conference Finals, the cannon itself was invented here in San Antonio. According to a New York Times article, the pressure-powered toy was fashioned for NBA use by Tim Derk, the man inside the Coyote (full name Entertainus Carnivorous) in the 1990s. Derk would deck the Coyote in Rambo-like gear, spraying the crowd with free shirts.

"It weighed like 90 pounds, including the tanks," Derk told the New York Times. "It was like carrying a TV set on your back. The gun was probably at least four feet long. It used a cast-iron pipe — the kind that goes into the floor underneath your commode."

The carnival atmosphere of today's NBA stadium can be traced back to the Showtime Lakers of the 1980's, when the ball club tried to spark things up by introducing timeout distractions and halftime shows. A hit in LA, the trend soon spread throughout all NBA franchises, making a spectacle of and distraction from the basketball game.

In the '90s, when Derk made his t-shirt cannon breakthrough, mascots and cheerleaders were archaically tossing shirts into the crowd by hand, using slingshots to reach a little higher. With the cannon, fans in the cheap seats now had the opportunity to catch a free t-shirt, an experience comedian John Oliver likened to the new American dream.