Considered influential by French New Wave directors, this 1954 Western stars San Antonio-born Oscar winner Joan Crawford as Vienna, a tough-as-nails saloon owner whose support of a new railroad doesn’t make her popular with the local cattle folk. When her former lover Johnny Guitar (Sterling Hayden) rolls in, Team Vienna must face off against a posse led by rancher Emma Small (Mercedes McCambridge). Selected in 2008 by the Library of Congress for preservation in the National Film Registry, Johnny Guitar is often mentioned when the conversation turns to queer cinema, especially since Crawford and McCambridge’s unconventional roles (not to mention their wardrobes) were a rarity for women in Westerns. There’s plenty to debate when it comes to the characters’ sexual identities, but what can’t be argued is the film’s misleading title, since Johnny Guitar really is more of a two-woman showdown.

Spearheaded by multi-instrumentalist Phillip Luna (of the bands The Please Help and Fear Snakeface and the production company Even I Have Seizures) and Jason Trevino (of the imprint ROHI Records and most-current band the Rosedale Highs), Roots in the Shadows of San Antonio combines the talents of 13 diverse bands on a compilation CD designed to showcase the underground music scene of central Texas. An outgrowth of a 2013 music series that popped up at unique locations around town (including the Hays Street Bridge, Imagine Books and Records, artist Cruz Ortiz’s studio and beyond), the project encompasses retro surf (King Pelican), ungovernable Americana (Garrett T. Caps), lo-fi indie rock (Snowbyrd), breakup pop (Whiskey Ships), punk (Puppy Jet), ambient folk (Nat’l Parks) and genres in between. Sala Diaz hosts the album release and listening party, complete with free CDs and beer from Karbach Brewing Co.

In observance of Asian Pacific American Heritage Month, San Antonio author Barbara Lazar visits Brook Hollow Library to discuss her novel The Pillow Book of the Flower Samurai. Set in 12th century Japan, this historical fiction novel is the story of a young girl’s epic journey from the warmth of her family to the Village of Outcasts. Marked out by an auspicious omen, she is trained in the ancient warrior arts of the samurai.

For nearly a decade, artist and educator Kyle Olson has operated a multi-purpose studio in Seguin. Through jobs at Blue Star Contemporary Art Museum and Austin’s Flatbed Press, Olson developed a network that brought a wide range of projects (from framing and crating for traveling exhibitions to making silicone molds for bronze castings) to the studio, which is outfitted with a woodshop, a darkroom and printing presses. Based partly on finances and the demands of his full-time job in the art department at Texas Lutheran University, Olson’s decided to vacate the studio; Houston artist Tommy Gregory has stepped in to help organize a pop-up exhibition with a portion of proceeds benefiting the big move. Referencing with its title the goings-on at the nearby Guadalupe County Court House, “Serving Papers” rounds up works by 18 artists, including Jimmy James Canales, Casey Arguelles Gregory, Megan Harrison, Justin Parr and Katie Pell.

Ross Burtwell is the owner and executive chef at the Cabernet Grill Texas Wine Country Restaurant in Fredericksburg, Texas and one of the chefs most associated with the growing Texas wine industry. With the release of his debut cookbook, Chef Burtwell is on a statewide tour to celebrate Texas food and wine. Texas Hill Country Cuisine: Flavors from the Cabernet Grill Texas Wine Country Restaurant, from Creative Noggin Press, highlights a number of the dishes that have helped Burtwell define Texas Hill Country Cuisine. It also showcases a select number of the wineries, farms, and markets that are making Fredericksburg an increasingly popular culinary tourism destination. According to Burtwell, Texas Hill Country Cuisine is rooted in some of the regions most prevalent culinary influences, including Southern cooking, Mexican and Tex-Mex cuisine, barbecue, Cajun food, and farm-to-table techniques. Yet, it has its own distinctive qualities, merging comfort food sensibilities, bold flavors, and attentiveness to how food and wine complement each other. This event will include a food tasting, to coincide with Pearl Farmers Market. 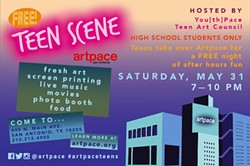 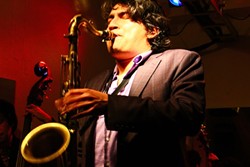 On the first Sunday of every month, docents offer free public tours showcasing the highlights of the McNay's collections and current exhibitions.

Recently named Best Gallery in Louisiana by American Art Awards, New Orleans-based Octavia Gallery showcases modern masters alongside emerging and established artists from around the world, with an emphasis on Cuba. Set to open this month, the gallery’s Houston outpost will focus on forging relationships with Texas artists while providing members of Octavia’s international roster a platform in the Lone Star State. Offering a taste of the gallery’s unique curatorial slant, the pop-up exhibition “Summer Solstice” features paintings and sculptures by nine artists including SA’s own Waddy Armstrong, Jerry Cabrera and Rodolfo Choperena. Curated by Alice Carrington Foultz, the group show explores the balance between light and shade via works capturing forest canopies, golf courses, swimming pools and hot summer afternoons.