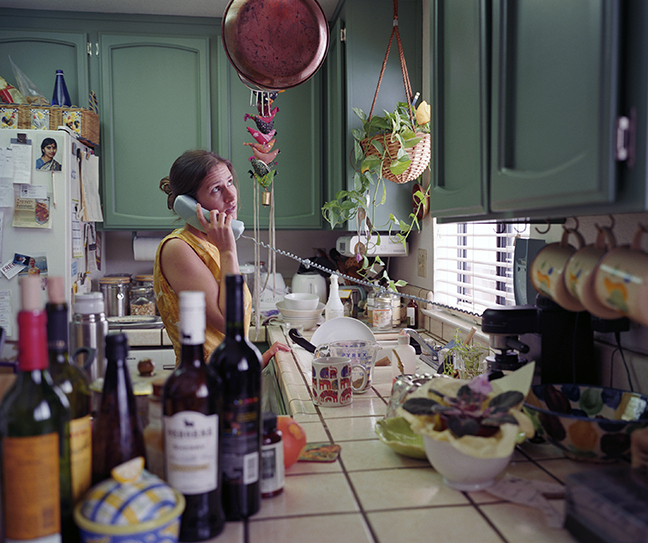 Whether building on fact or fiction, the artists wrapped up in “Spinning Yarns: Photographic Storytellers” present visual dialogues curators Anne Leighton Massoni and Libby Rowe admit present “more questions than answers.” Supported by the Kendall College of Art and Design and Monmouth University, the traveling show comprises 64 works representing photographers from across the US as well as India and the UK. 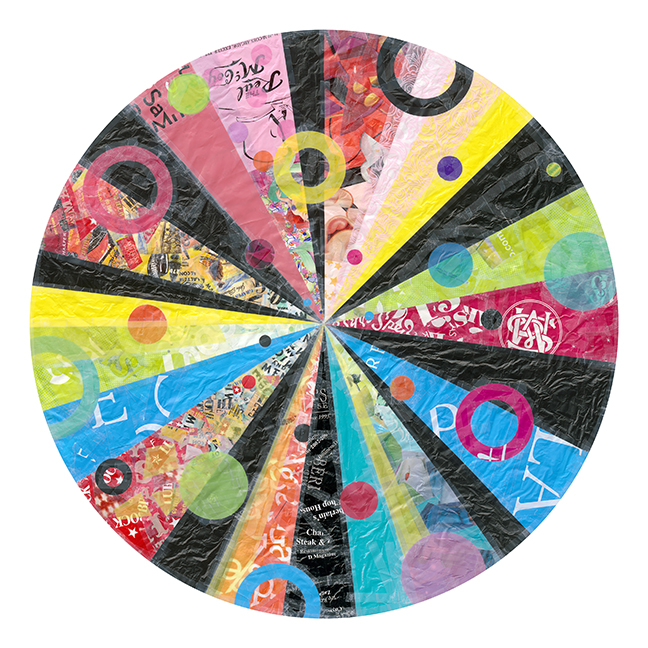 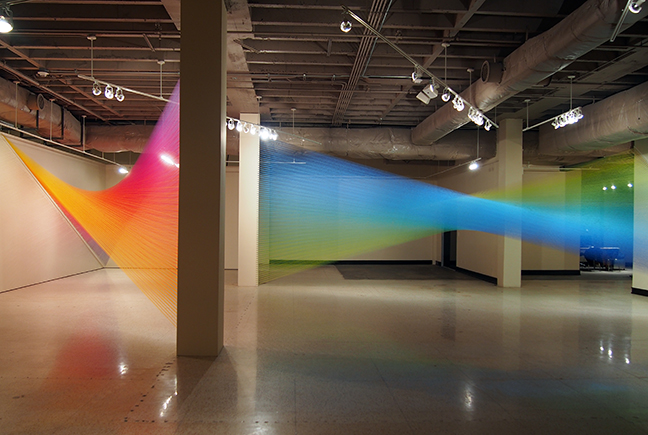 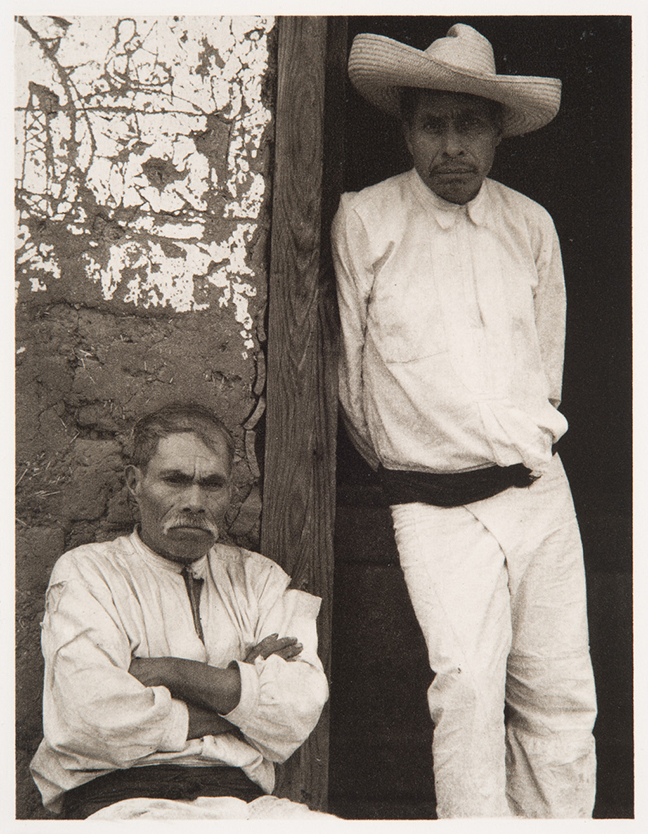 Born in New York in 1890, Paul Strand started taking photography seriously circa 1907, when he was studying under social reformer and documentary photographer Lewis Hine at the Ethical Culture School and frequenting soon-to-be mentor Alfred Stieglitz’s Little Galleries of the Photo-Secession (later known as 291). With encouragement from Stieglitz (who published Strand’s earliest work in his seminal quarterly Camera Work), Strand sharpened up his soft-edged aesthetic and developed a naturalistic style that loaned itself to stark cityscapes, candid street portraits (clandestinely executed with a rigged camera) and still lifes touted as “the first photographic abstractions to be made intentionally.” In 1932, Strand set out to document Mexico’s changing landscape—a project proposed by composer Carlos Chávez, who was then director of the fine arts department of the Secretaría de Educación Pública. While there, Strand worked with Chávez on the documentary-turned narrative film Redes (concerning the plight of fishermen) and created more than 175 large-format negatives and 60 platinum prints depicting small towns, fieldworkers, churches and religious icons. Recently acquired by the McNay as a gift from local collector Susan Toomey Frost, “The Mexican Portfolio” highlights this ’30s-era time capsule through a set of 20 photogravures first published in the 1940 book Photographs of Mexico. $10-$15, 10am-4pm Wednesday, 10am-9pm Thursday, 10am-4pm Friday, 10am-5pm Saturday, noon-5pm Sunday, 10am-4pm Tuesday, McNay Art Museum, 6000 N New Braunfels, (210) 824-5368, mcnayart.org.—BR 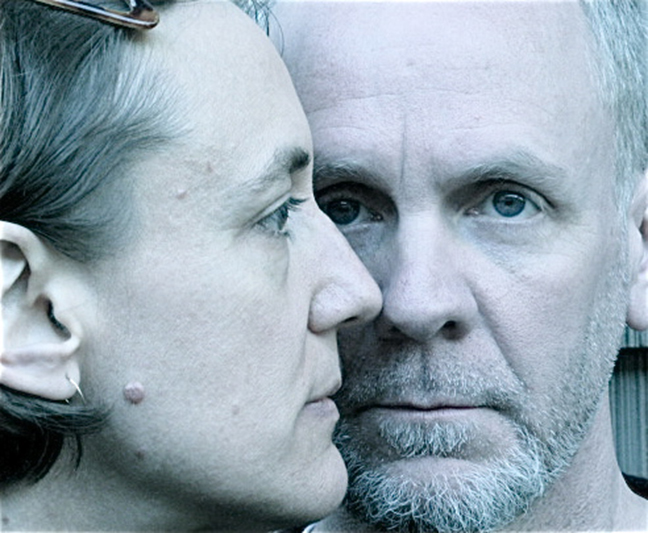 Portmanteau-ing—as Clonster creators Beth Lorio and Andrew Thornton (right) have—the words “monster” and “clown” seems redundant if you’ve seen It, Poltergeist or, really, any clown at any time. To paraphrase Joseph Campbell, clowns are the pancake-make-up masks we plaster across the abyss when an all-consuming void just ain’t creepy enough. A wordless performance piece, Clonster explores that nebulous sweet spot shared by the horrors of our collective unconscious and our children’s birthday entertainment. Or something. Truth told, we only know three things about Clonster: Its creators were founding members of the Knights of Indulgence Theater, the admission price for Thursday night’s performance is whatever you want it to be and the press release contains the words “dismemberment,” “Richard Simmons” and “contemplative burlesque.” Nothing like experimental theater to really spice up your nightmares. $10-$14, 8pm Thursday-Saturday, 2:30pm & 7pm Sunday, the Stables at the Overtime Theater, 1203 Camden, (210) 557-7562, theovertimetheater.org. —Jeremy Martin 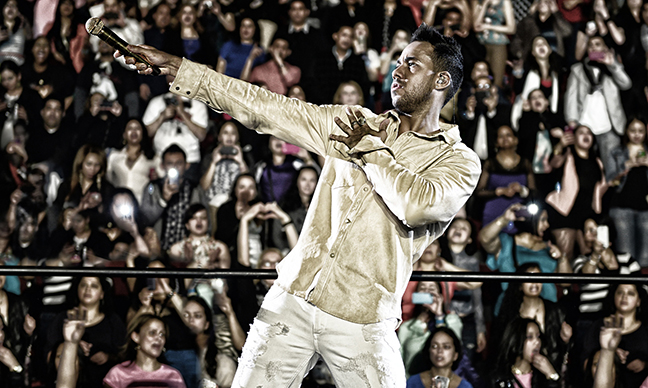 In 2002, Aventura’s Spanish-language smash hit “Obsesión” announced the arrival of a modernized version of Dominican bachata. Fronted by chiseled crooner Romeo Santos, the group—a quartet of cousins and brothers—became a mainstay on the Latin charts but dissolved when Santos went solo in 2011. Anticipated as his departure may have been, the level of stardom Santos has since found is major—with high-profile collaborations (from Tony Bennett to Nicki Minaj) sold-out arenas and a role in 2015’s Fast & Furious 7 standing out as highlights. In a review of his concert at LA’s Staples Center, Billboard addressed his fanbase, noting, “Rows of seats were filled with women in skin-tight clothing singing along with Santos and snapping selfies.” The undisputed “King of Bachata” plays SA in support of his sophomore LP Formula Vol. 2. $35-$125, 9pm Friday, AT&T Center, One AT&T, (800) 745-3000, attcenter.com.—BR

My Life with the Thrill Kill Kult 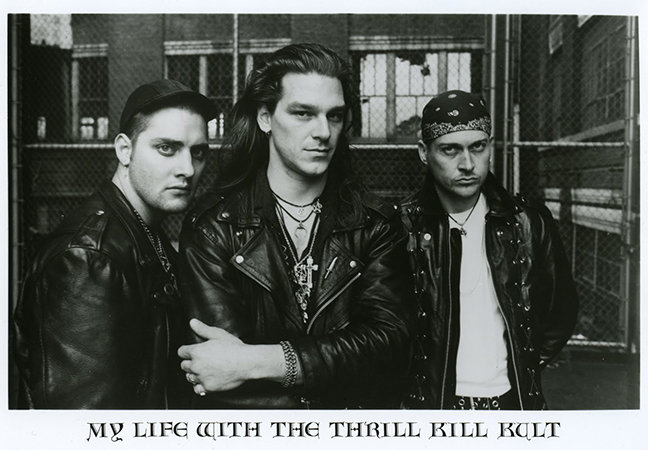 “To me, bad taste is what entertainment is all about. If someone vomits while watching one of my films, it’s like getting a standing ovation. But one must remember that there is such a thing as good bad taste and bad bad taste.” —John Waters

“Up till then, the music had been kind of based on the blues and slavery, and we thought it was time to update it to at least Victorian times—you know, the Industrial Revolution.” —Genesis P-Orridge of Throbbing Gristle

Add the intentional, dayglo bad taste of director John Waters to the innovative industrial music of Throbbing Gristle, sprinkle in a healthy dose of occult imagery and voilà—it’s the industrial dance of My Life With the Thrill Kill Kult. In fact, a camp art film was the intended target of band members Groovie Mann and Buzz McCoy when the project began in Chicago in 1987. The Thrill Kill Kult Super-8 failed to gain traction, but Mann and McCoy took the three tunes they had for the soundtrack, put them out on Chicago’s iconic Wax Trax label “and the rest is herstory,” as Groovie Mann (pictured above, center, in band photo circa 1990) told the Current.

Through their 25-year career, it’s been hard to pin down the sound of My Life with the Thrill Kill Kult. The industrialists shift comfortably between new wave, Deee-lite pop and brooding dance music, keeping heads confused but nodding through the mire. Like all industrial work, samples of “non-musical” sounds are vital to each track, with Mann and McCoy cutting harsh vocal loops until they’re untraceable new instruments. Mann likes to think of it as “creating with tapes and clips of things sewn together into this Frankenstein called Thrill Kill Kult. We fell together into this pact with our madness and pent-up ideas.”

Thrill Kill Kult samples build on each other like rainclouds until reaching a critical mass, releasing a dopamine downpour and pounding rhythm on the fours. The samples feel unforced, found and mixed rather than meticulously pored over. “They show up,” said Mann. “Or as I used to say: ‘They find us.’ Sometimes they magically appear. Looking too much for them sounds too obvious a lot of times ... Too noticeable.”

And too much thought would ruin the party. Part of Thrill Kill Kult’s immediate draw is the camp and candy of “A Daisy Chain 4 Satan” and “Kooler than Jesus,” tossed over blown-out Orchestra Hit settings on old Yamahas. The occult and perennially loaded images that occupy Thrill Kill Kult’s tunes are rude for rudeness’ sake, trying to get dancers to spit back sequin-studded satanic slogans while busting a groove. It’s good bad taste at its best. $15-$18, 7pm Friday, The Korova, 107 E Martin, (210) 995-7229, ticketfly.com. —Matt Stieb 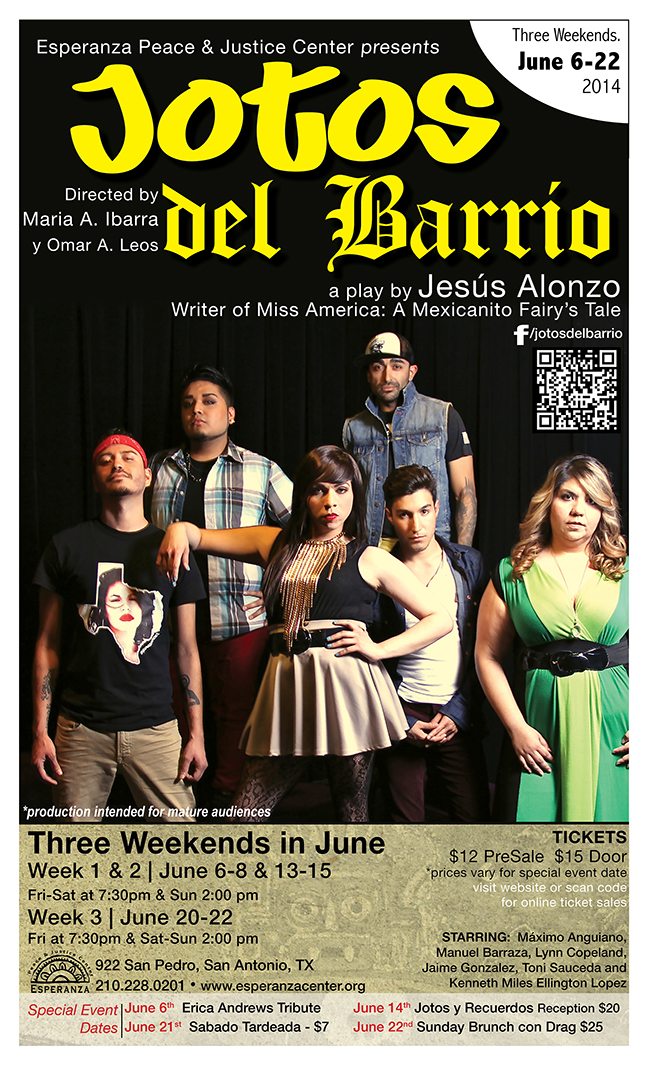 As we reported more than a decade ago, Jesús Alonzo wrote Jotos del Barrio as a college student responding to the marked absence of Latinos in a conversation about queer iconography. Staged as a reading in 1995 and first performed in 2002 (featuring late local drag icon Erica Andrews in the role of Janie la Transie), the play tells the stories of young “Latino, Chicano, Tejano, Mexicano and Mexican-American gay men and transgender individuals” through poems, monologues and vignettes. Timed with its publication by San Francisco-based Kórima Press, Alonzo’s play returns to the Esperanza with a revival directed by Maria A. Ibarra and starring Máximo Anguiano, Manuel Barraza, Linda Copeland, Jaime Gonzalez, Kenneth Miles, Ellington Lopez and Toni Sauceda. $12-$15, 7:30pm Friday-Saturday, 2pm Sunday, Esperanza Peace and Justice Center, 922 San Pedro, (210) 228-0201, esperanzacenter.org. Through June 22. —BR 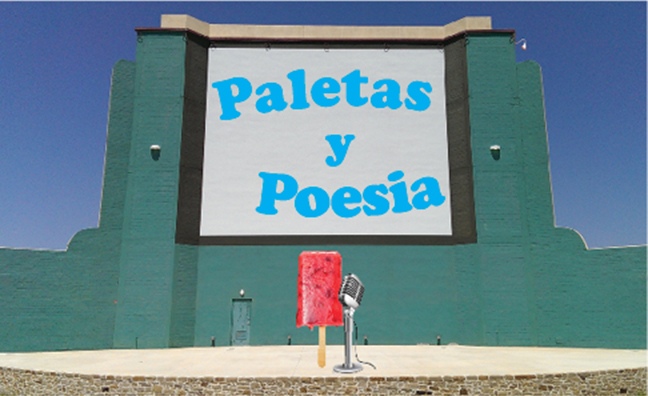 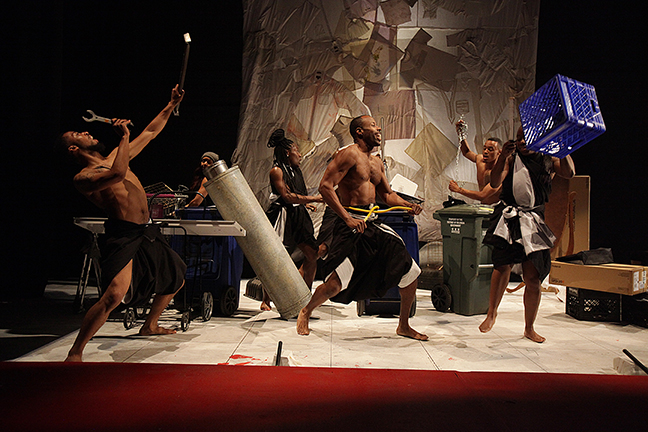 The percussive art of stepping boasts a rich history rooted in the gumboot, a dance devised by South African gold miners in the 19th century as a form of communication and an alternative to drumming, which (along with talking) was forbidden in the mines. A dynamic blend of footsteps, claps and spoken word (and even chanting, acrobatics and stunts), stepping developed throughout the 20th century via African-American fraternities and sororities but also takes cues from the dance routines of Motown bands like the Temptations and the Four Tops. Formed in 1994 and deemed “the first professional company in the world dedicated to the tradition of stepping,” Washington, D.C.’s Step Afrika elevates the genre while presenting it as a means to promote “teamwork, academic achievement and cross-cultural understanding.” $35, 8pm Saturday, Jo Long Theater, Carver Community Cultural Center, 226 N Hackberry, (210) 207-7211, thecarver.org.—BR 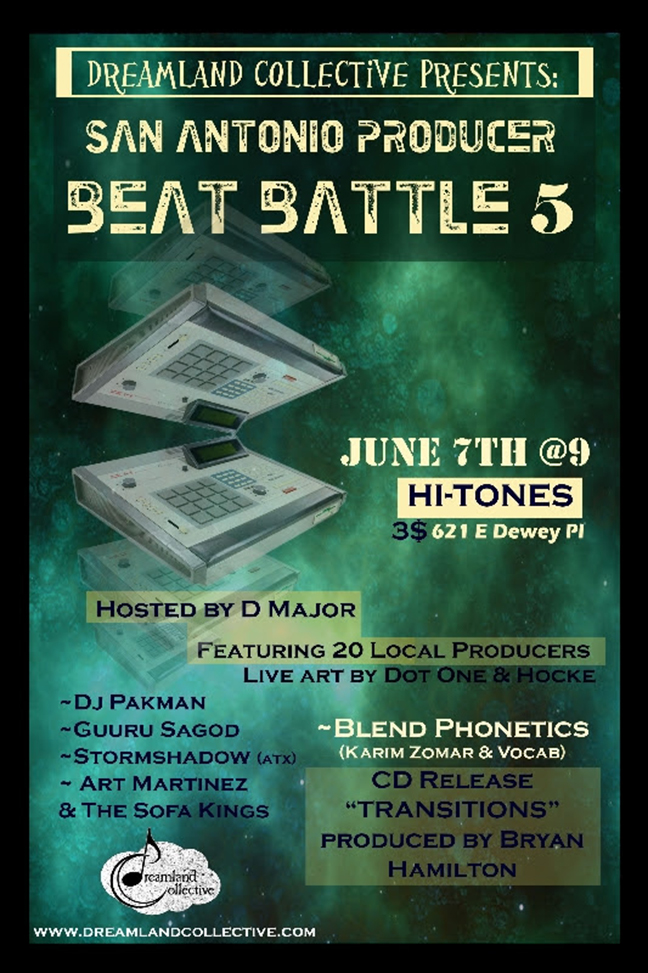 For the fifth bout of the Producer Beat Battle, I’m hoping SA’s resident beatmakers will set up on Hi-Tones’ picnic tables, mixing off and getting mean at each other while dropping ridiculous Zoolander dance moves. It’ll look nothing like that, but the battle will feature some of San Antonio’s finest producers, including Progeny (Chisme), Kizer Sose (Dead the Poets), Akomplice and Lizarazo (First Caste). Produced by the Dreamland Collective label, the battle should set the stage for some of SA’s best hip-hop dancers, breaking to more MPCs and Ableton Live than vinyl rigs. Saturday will also serve as the release party for Blend Phonetics’ Transitions, produced by Bryan Hamilton. $3, 9pm, Hi-Tones, 621 E Dewey, (210) 573-6220, dreamlandcollective.com. 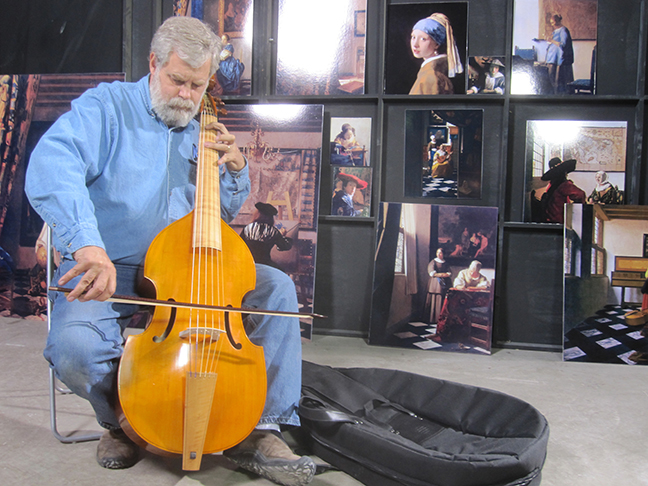 Directed by Teller of the magic-comedy duo Penn & Teller, the 2013 documentary Tim’s Vermeer follows local inventor Tim Jenison on a five-year investigation that produced 2,400 hours of footage. Furthering controversial theories surrounding Johannes Vermeer’s likely use of a camera obscura to create his hyperreal renderings, Jenison set out to recreate the 17th-century Dutch painter’s iconic work The Music Lesson. Outlined in the Current’s review of the film (“The Magic Hours,” March 5) this process involved Jenison replicating Vermeer’s studio in a warehouse, learning Dutch and globe-trotting as needed. In conjunction with the installation “Glories of the Baroque: 17th-Century European Art,” SAMA hosts a talk with Jenison, who’ll shed light on his “epic adventure to research Vermeer’s use of optics.” $5-$10, 3-4pm Sunday, San Antonio Museum of Art, 200 W Jones, (210) 978-8100, samuseum.org. —BR