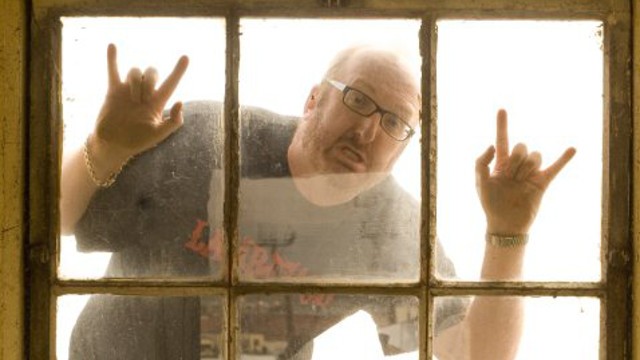 Brian Posehn is a really big guy – physically and figuratively. Standing at 6’6” and often bearing a thick, grizzly red beard, seeing him brings the words “nerdy Viking” to mind. Posehn is also a very famous comedian and comic book writer, as well as a veteran Dungeon and Dragons player.

Chances are that people who say they’re unfamiliar with Posehn would recognize him from his television work, which dates back to the mid-1990s. He worked on HBO’s comedy skit show Mr. Show with Bob and David starring David Cross (Arrested Development, The Increasingly Poor Decisions of Todd Margaret) and Bob Odenkirk (Breaking Bad, Fargo). On Just Shoot Me!, he portrayed Kevin Liotta, the “mail guy” who had a huge crush on Nina Van Horn (Wendy Malick). And more recently, he played the hilarious gay neighbor, Brian Spukowski, on the Sarah Silverman Program.

A veteran stand-up comic, Posehn has done more than just television; he has three specials under his belt, the most recent being The Fartist. Comic book fans also know him as the writer of Deadpool for Marvel Now!

Just after he arrived in San Antonio, Posehn spoke to the Current about his shows at Laugh Out Loud! Comedy Club and about what it’s like to craft comics.

When Posehn writes stand-up, he says he works very organically. At 47-years-old, his ideas for jokes come together more or less fully formed, and his material has become more personal. He speaks knowingly about the pitfalls of growing old, from old man farts to man-boobs.

very negative,” says Posehn. “I take it pretty hard on the chin every night making fun of myself.”

When he’s not on stage at Laugh Out Loud!, Posehn will be at the Texas Comicon and at Heroes and Fantasies, meeting fans of his run of Deadpool.

Deadpool is one of the Marvel Universe’s most irreverent personalities. He’s sarcastic, mentally unhinged, and he’s popular at comic conventions. Posehn and writing partner Gerry Duggan deliver outrageously funny stories for Deadpool, such as having him kill zombie versions of notable U.S. Presidents.

For Posehn, writing stand-up versus for comic books couldn’t be more different. Stand-up is about framing the joke, he says, while his comic book writing emphasizes the story. He’s adamant about that destinction.

“That said, Deadpool is, of all the characters out in the Marvel Universe, the one that makes the most sense for somebody who has a comedy background to write.”

While Posehn believes that his work as a stand-up comedian is very different from that of a comic book writer, he’s pleasantly surprised to know that some fans who read his comic are also fans of his stand-up comedy.

Check out Posehn all this weekend at Laugh Out Loud! Comedy Club. Fans of his comic work can see him at Texas Comicon on Friday and Heroes and Fantasies on Saturday.