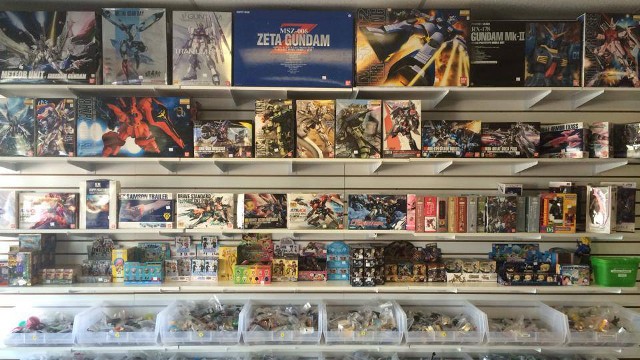 I lust after anime toys as much as the next anime nerd so when I discovered Anime Tokyo (3505 Wurzbach Rd,

“Anime” are cartoons from Japan. Television shows like Naruto and One Piece, as well as the eponymous Pokemon television series, are well-known examples of anime.

Mark and Velma Sanchez, a brother and sister team, opened the shop in March with the aim of bringing current, trendy anime and memorabilia to San Antonio.

From the looks of their shop, they certainly hit their mark. They have numerous anime-inspired T-shirts from popular series, including Evangelion, K-ON!, and High School of the Dead. Models kits and figurine boxes crowd expansive shelves along the walls. Animation cels from Akira, Cowboy Bebop, and Kiki’s Delivery Service are either framed or sitting under glass. In the middle of the store are four shelves packed with both DVDs/Blu-rays and Japanese comic books.

The two separate times I visited the store, I watched customers dash around the store grabbing shirts and DVDs in a kind of weird fervor.

Surprised that a store like this exists in San Antonio, some people freeze once they get to the door, says Velma Sanchez, the store manager.

Easily, their t-shirts are the most popular item, but the real attraction is the bargain import items.

In plastic bins attached to the walls, there are a plethora of strange toys from Japan and China, both familiar and unrecognizable. Gundam, Dragon Ball Z, and One Piece toys are mixed in with more esoteric figurines, key chains, and other bric-a-brac. Each item costs anywhere between $1 to $10 dollars.

Mark Sanchez, the storeowner, travels to Japan twice a year on business where he bids on enormous toy lots to keep Anime Tokyo stocked.

During my most recent visit, I came away with two surprising treasures. One is the figurine only made available for those who pre-ordered the premium edition of Promise of Haruhi Suzumiya, a 2007 Play Station Portable (PSP) game that never saw a stateside release. I also snagged a limited edition figurine from the popular anime series My Little Sister Can’t Be This Cute. I spent $10 in total.

For most people, these kinds of toys aren’t noteworthy; but for anime nerds in San Antonio, a shop like this should not be missed.