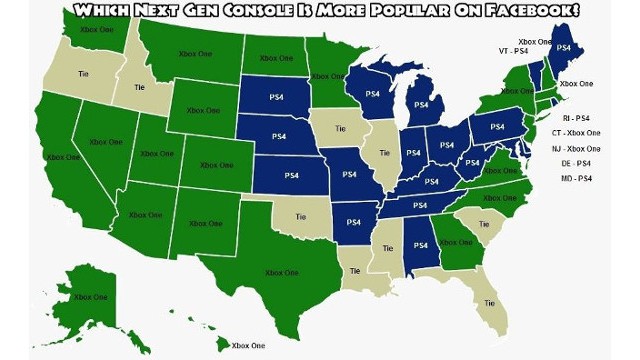 In this bitter console war between Nintendo, Sony, and Microsoft, Texas has finally chosen a side. No, it isn’t Nintendo. According to Movoto, a real estate website, Texas prefers Xbox One to all others.

Based on the number of Facebook "likes" each game company received on Facebook, 22 states prefer Xbox One and 19 states prefer Playstation 4 (9 states like both consoles equally).

This must be the work of some very jealous Xbox One fanboys working in real estate. As a completely unbiased Playstation 4 fanboy, I proclaim that this data must be totally and utterly wrong.

National console sales actually favor Playstation 4 over Xbox One. Forbes reported that Sony is dominating over Microsoft and Nintendo and is currently the top-selling console for a fifth month in a row. In May 2014 alone, Playstation 4 sales nearly doubled that of Xbox One.

You see? No self-respecting human being in Texas would ever Like Xbox One over Playstation 4.

Of course, being an unbiased fanboy, I am willing to concede to David Kaelin, owner of  Game Over Video Games, a chain of video game stores that buy and sell used video games across Texas.

"Both have roughly equal demand from what we can see, and we see games traded in already from both systems at approximately the same rate," Kaelin communicated to the Current via email.

In the big scheme of things, even if it is true that Texas likes Xbox One more than the Playstation 4, it doesn't reflect how each console sells on a national level, nor the supply and demand of their games.

To be fair, the survey didn’t get everything wrong; nobody likes Nintendo’s Wii U.