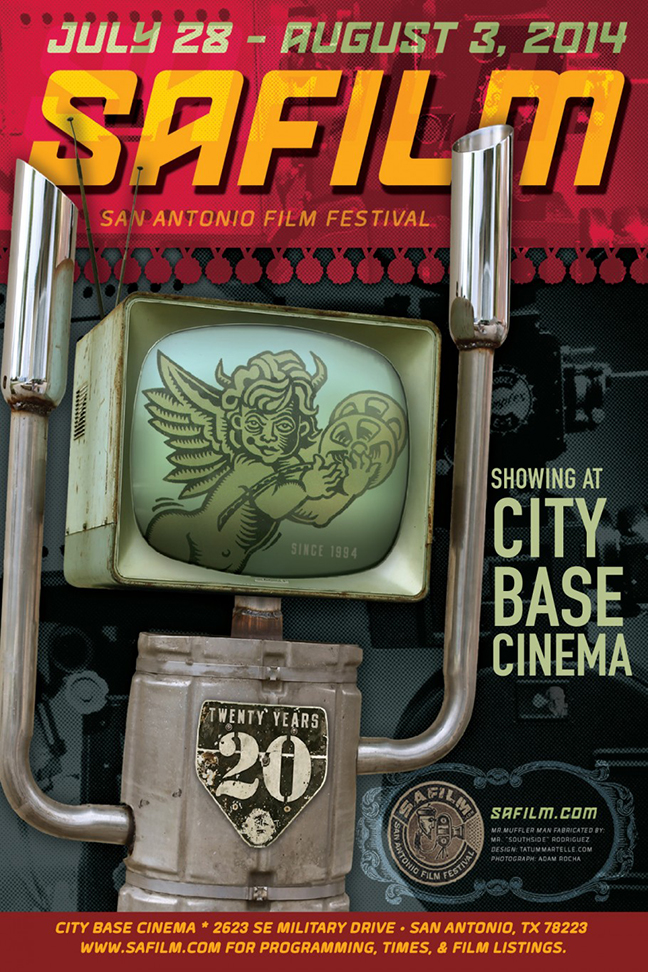 In its 20th year, SA Film continues to mature with some exciting new features. While festival director Adam Rocha will bring back the fest’s collection of feature films, shorts and documentaries along with panels, workshops (in partnership with the Texas Film Commission) and parties, most of the events go down at the Southside City Base Cinema. For Rocha, the “very choice,” locally owned theater perfectly reflects the Festival’s commitment to improving SA’s homegrown film industry. Standout films include hard-hitting doc Jose Canseco: The Truth Hurts, cancer dramedy Isn’t It Delicious and Daniel Baldwin’s locally shot The Wisdom to Know the Difference (Baldwin will be in attendance), plus dozens of shorts and recent work from some of SA’s best filmmakers. This year unveils a brunch awards ceremony at NAO as well. As Rocha mused in a recent interview: “Isn’t the battle cry of all local musicians, ‘support the local music scene’? That’s also our battle cry: ‘Go watch a film.’” For a full schedule, visit safilm.com. $8-$149.99, 5pm Thu; workshops: 10am, films: 5pm Fri; workshops: 10am, films: 3pm Sat; brunch awards ceremony (at NAO): 10:30am, films: 3pm Sun, City Base Cinema, 2623 SE Military, safilm.com. —Callie Enlow 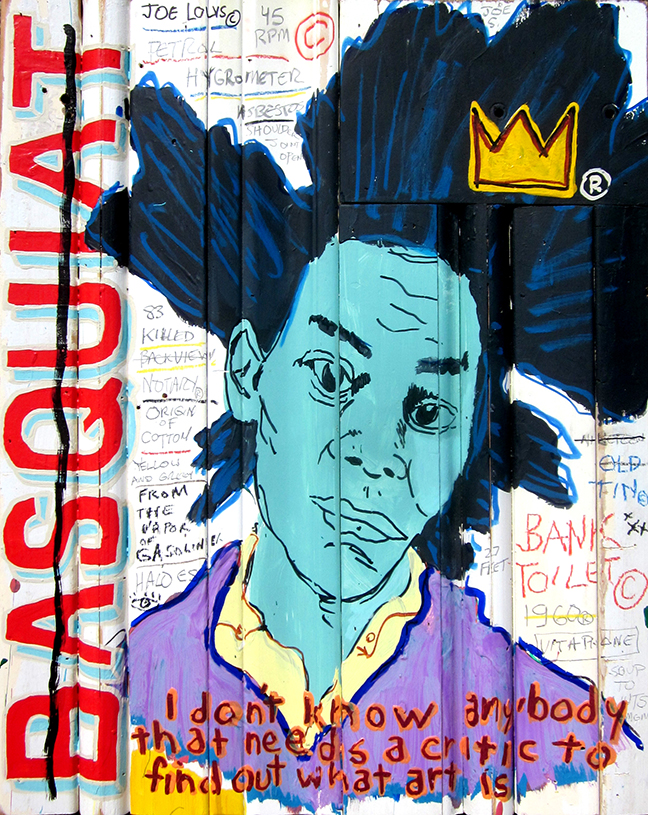 With a nod to exquisite corpse, “You Are Here” highlights a collaboration between Tim Kerr and Brian Phillips. Kerr studied painting and photography at UT–Austin and played a key role in Texas’ early punk scene as a founding member of Big Boys and other bands. Louisiana native Phillips illustrates his mantra “One man’s junk pile is another man’s art supplies” with puzzle-like constructions built from reclaimed wood. A tribute to inspiring icons, the duo’s joint project involved Kerr painting portraits of Rosa Parks, Jean-Michel Basquiat (above), Evel Knievel and many more on surfaces pieced together by Phillips. Free, 7-10pm Thursday-Friday, Hello Studio, 1420 S Alamo #106, Building B, (210) 291-8640, hellostudiosa.com. —Bryan Rindfuss 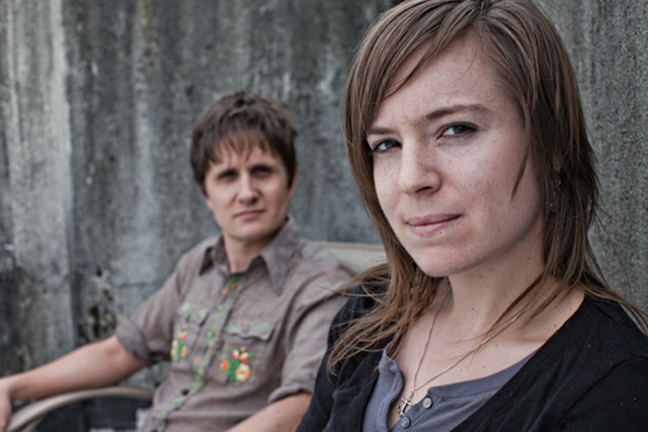 A romantic coupling as the foundation of a band can mean bad news; just ask Rumors-era Fleetwood Mac how that arrangement holds up in the face of meteoric success. But, Berkeley’s Street Eaters appear to have a working model of how to juggle it all, while avoiding the six-second bubble gum appeal and tradeoff melodies of the many twee, indie pop couples out there. On their new release, Blood::Muscles::Bone, Megan March and Johnny Geek churn through 10 songs of stripped-down punk, relying on March’s drums and Geek’s bass to propel Street Eaters’ formidable energy. With SA’s Sheila and the Chilaquiles, and Smokey Robinsons. Free, 9pm, Bottom Bracket Social Club, 1603 N Colorado, (210) 267-9160, facebook.com/bottombracketsocialclub. —Matt Stieb 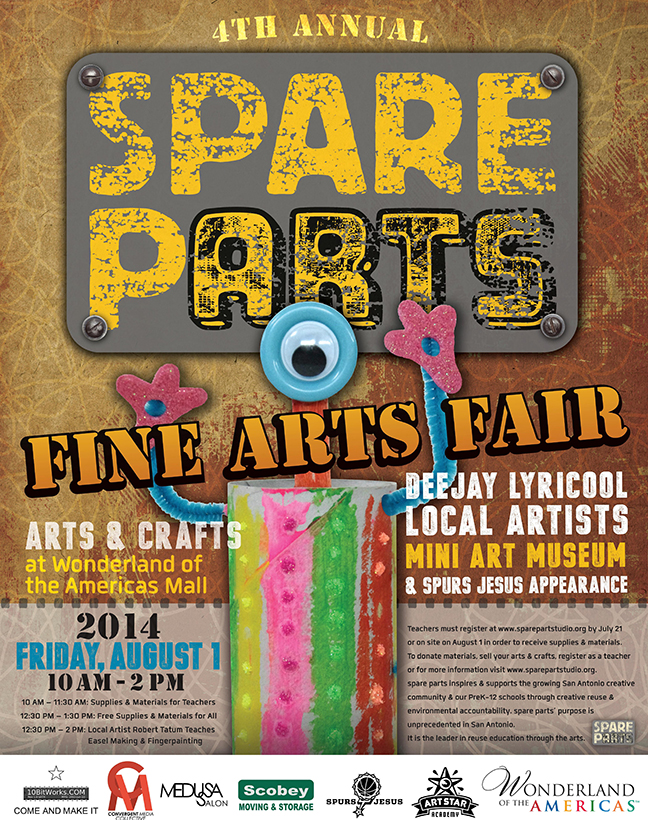 Master reuser Mary Elizabeth Cantú launched Spare Parts in 2011 in response to a decrease of creativity in the classroom and budget cuts in arts funding. Active throughout the year, her organization reaches 10 area school districts through its signature Fine Arts Fair. The fourth annual event aims to distribute a stockpile of donated art supplies among pre-registered teachers (plus members of the creative community from 12:30-1:30 p.m.) during a kid-friendly day with beats by DJ Lyricool, eco-friendly vendors, finger-painting sessions with artist Robert Tatum and photo ops with Spurs Jesus. Free, 10am-2pm, Wonderland of the Americas, 4522 Fredericksburg, sparepartstudio.org. —BR 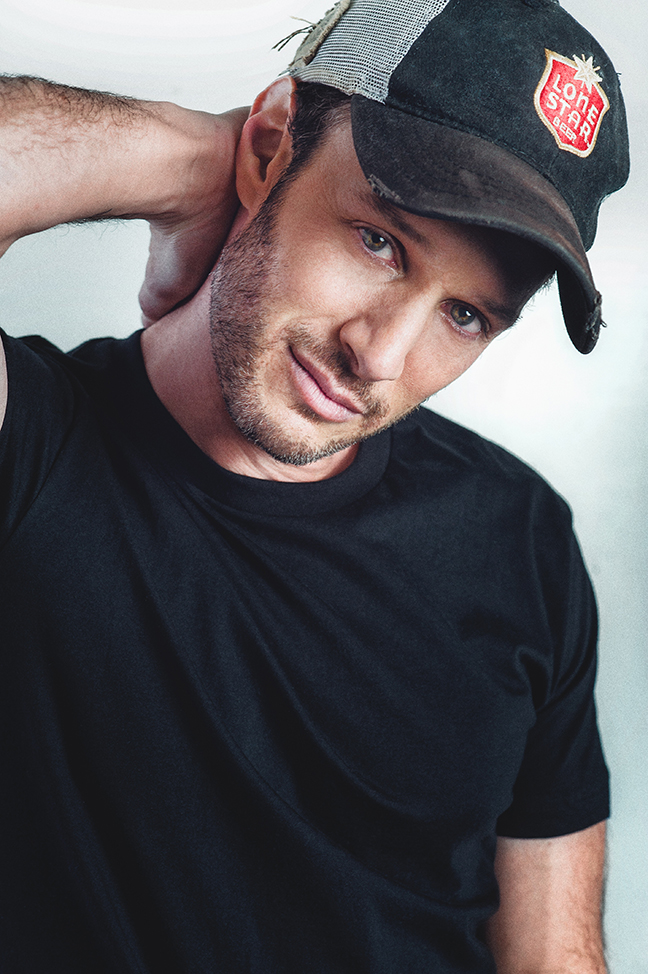 There seem to be two kinds of comedy fans in 2014: those to whom a Chelsea Lately credit is a come-on and those to whom it’s a warning flag. In the case of Josh Wolf, this binary proves as dumb as most. Though at 40-plus he looks every bit the Mannish Boy Frat Daddy, and his style—confidently delivered observations about sex and other bodily functions (what before the ’90s alt/club split was commonly known as “comedy”)—is definitely panel-ready, his actual life experiences as a single dad give his material and outlook a broader appeal than any niche he might appear to fit. $27.50, 8pm, Charline McCombs Empire Theatre, 226 N St. Mary’s, (210) 226-3333, majesticempire.com. —Jeremy Martin 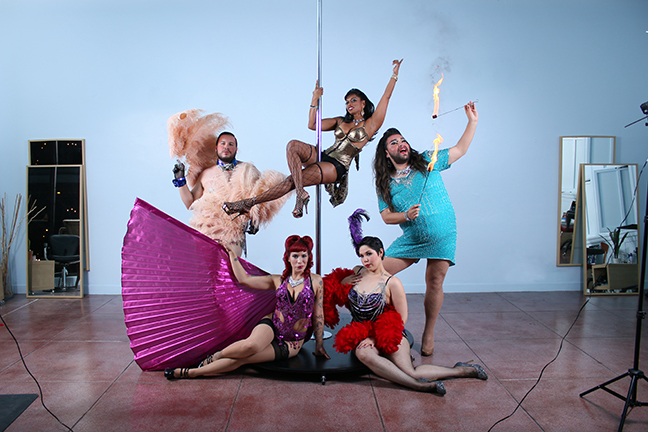 Our city currently boasts only a few prominent burlesque troupes including Le Strange Sideshow, Stars and Garters Burlesque, and Pastie Pops Burlesque. The groups regularly perform at venues across town, including Fitzgerald’s, the Korova and the Josephine Theatre. Jasper St. James and Dino Foxx are two of a handful of San Antonio producers responsible for the upcoming San Antonio Burlesque Festival, now in its third year of existence. A two-day showcase scheduled for the first weekend in August, SABF promises some of the best acts from across the country in addition to local favorites. The Friday Night Showcase will feature performances by James, Foxx (aka Foxxy Blue Orchid), Coco Lectric and Gaige as well as farewell performances by the current reigning Queen and King of San Antonio Burlesque, Olympia DeWinter and Stephan (no, not Saturday Night Live’s famous club kid character). Saturday will be an evening of headliners competing for a number of titles. Among the notable names are Waxie Moon of Seattle and Michelle L’amour of Chicago. $25-$50, 7pm Friday-Saturday, The Josephine Theatre, 339 W Josephine, (210) 734-4646, sanantonioburlesquefest.com. 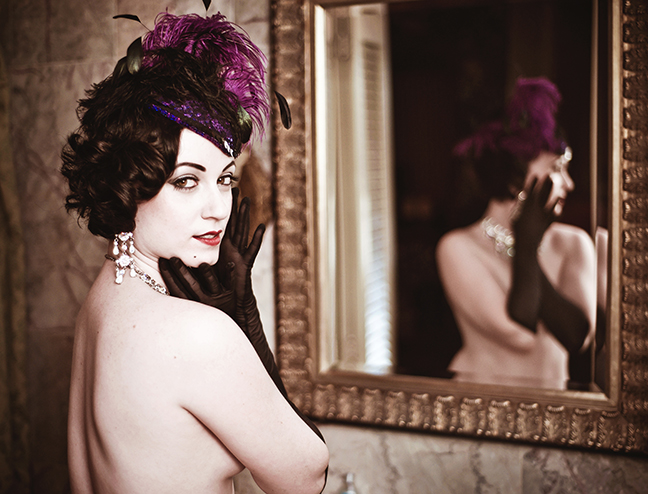 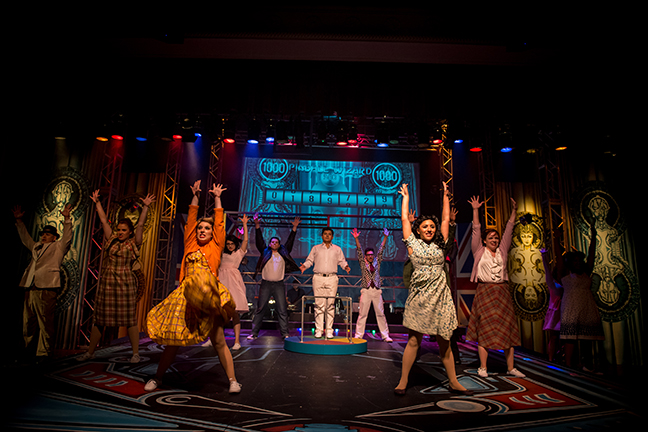 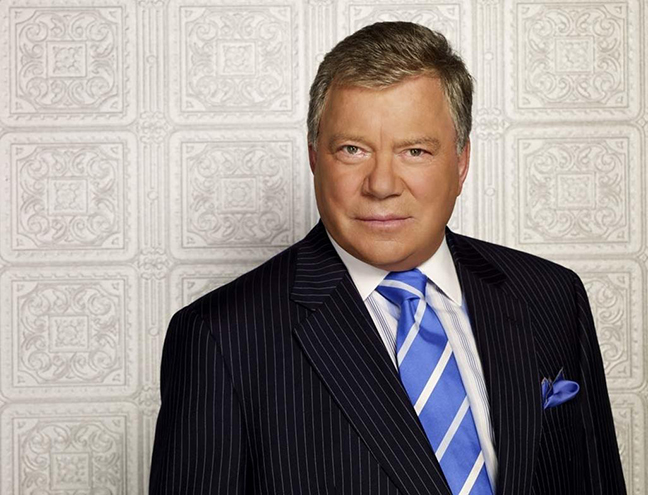 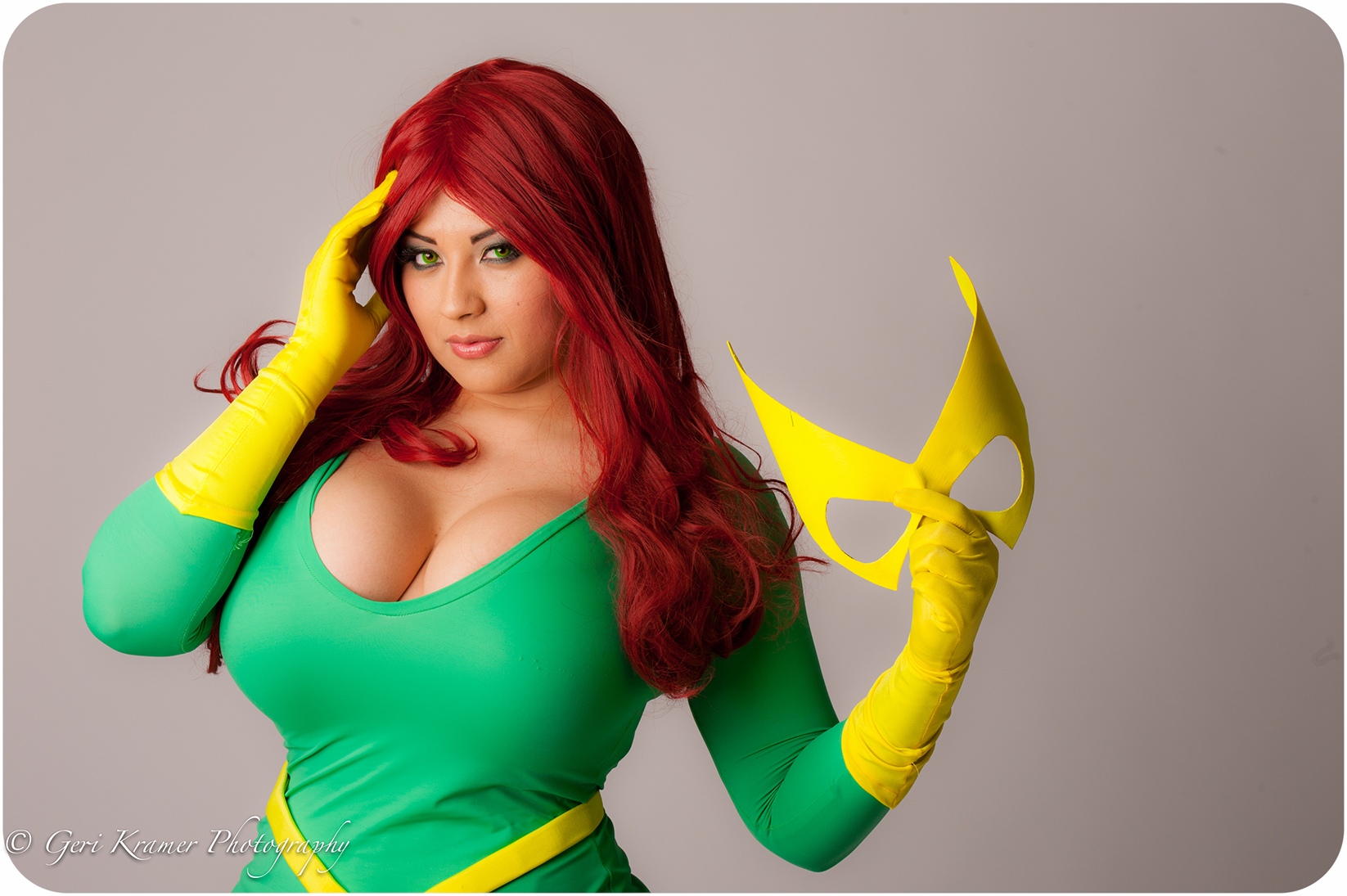 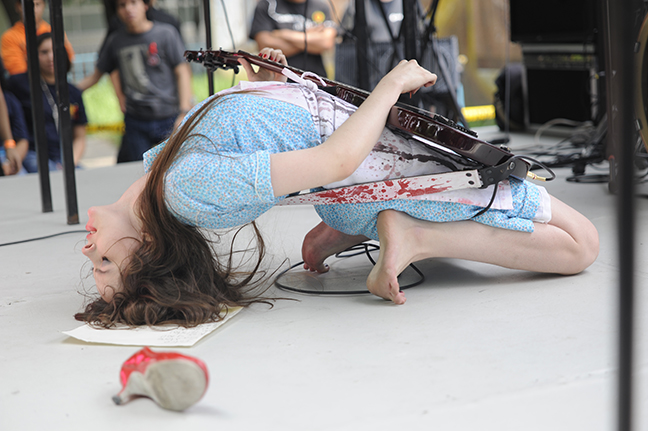 Formed in Guadalajara in 2007, Le Butcherettes flies under the radar despite two solid albums, big-name collaborators (including Henry Rollins and Shirley Manson) and provocative performances involving lead singer Teri Gender Bender (née Teri Suárez) doused in blood and urinating onstage. The Los Angeles Times recently applauded 2014’s Cry Is for the Flies’ “teeth-baring guitars and carnival-esque keyboards” while relating Rollins’ take on Suárez: “She’s a star. It’s like a great character in a movie.” The band kicks off a summer tour at the Rabbit with At the Drive-In/The Mars Volta alums Antemasque. $17-$20, 8pm, The White Rabbit, 2410 N St. Mary’s, (210) 737-2221, ticketfly.com. —BR 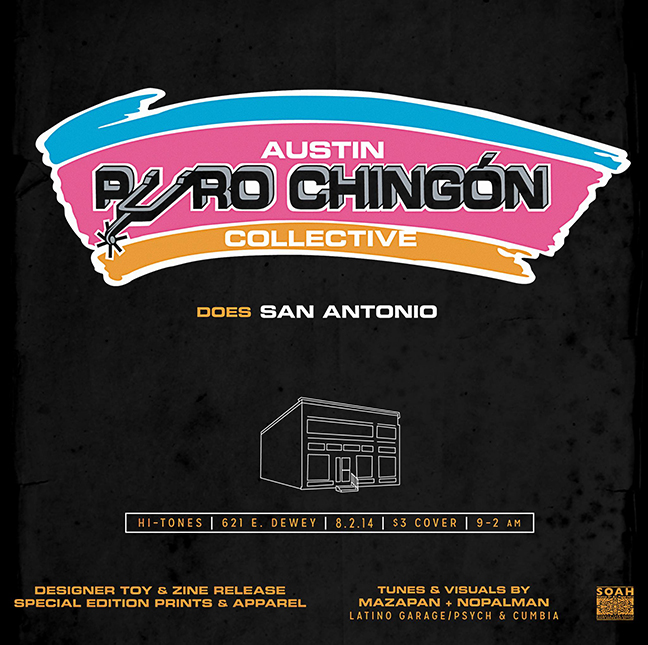 Austin Latino art collective Puro Chingón hits SA for the first time, selling and showing off their new zine and toys. The ChingoZine is a biannual showcase of drawings, design and printwork from artists in SA, Austin, NYC and Mexico—one drawing quotes a cartoon turd named King Shit, saying “If I were King, I wouldn’t do shit!” The toys are acrylic on resin, fun little representations of Texas and Puro Chingón’s Mapache Bear. On deck for music, DJs Mazapan and Nopaman will spin some wild Latino ’60s psych and garage, cumbia, colombiana, sonidera—basically, the most bitchin’ Spanish-language tunes you’ve never heard. $3, 9pm, Hi-Tones, 621 E Dewey, (210) 785-8777, facebook.com/PuroChingonCollective. –MS