"Fill Your Lungs with Fresh Air: Matisse and Writing" 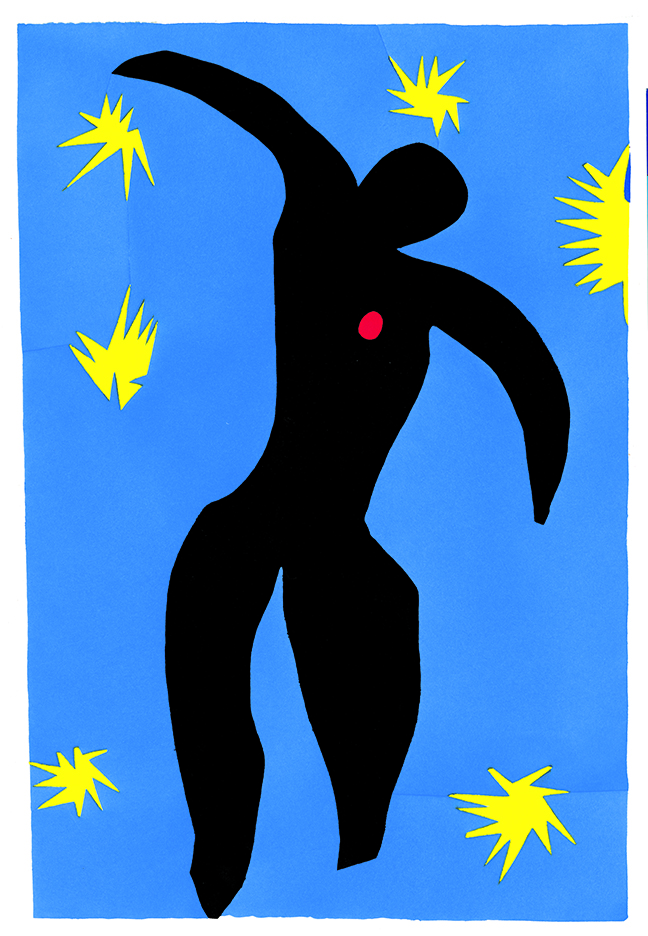 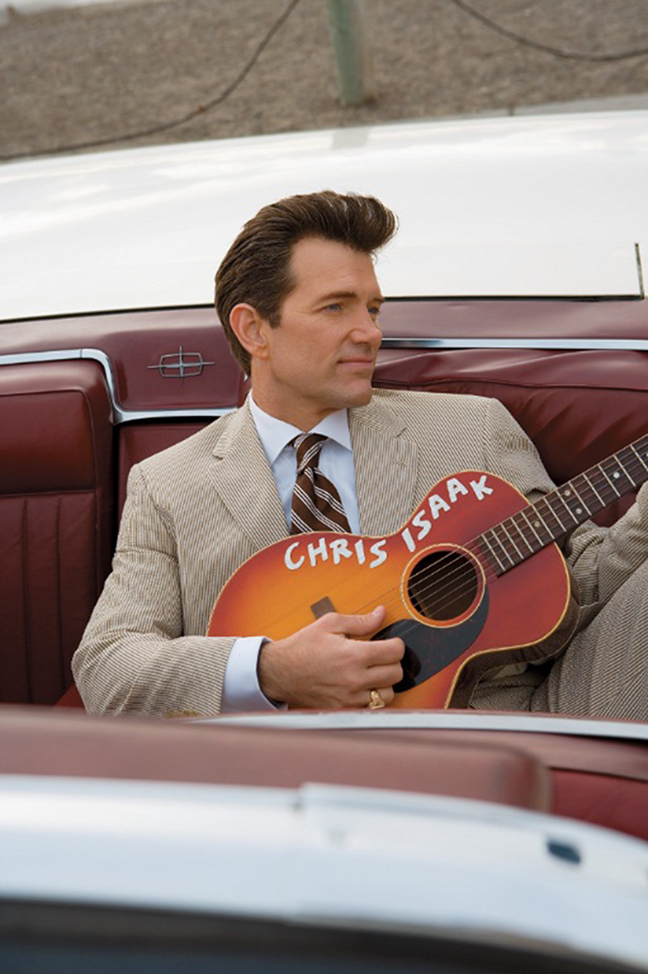 Likely best known to many as the guy who pioneered the sexy, supermodel-blessed music video—with his popular 1989 song “Wicked Game”—Chris Isaak makes music that is a hodgepodge of influences, from blues to rockabilly, from a smoothed-out version of classic rock to shimmering and vampy surf-rock. He has also starred in his own TV show, captured the imaginations of David Lynch and Stanley Kubrick, and remained a talented songwriter with a sultry voice and an independent mind. Catch him Thursday at Gruene and get a taste of why Isaak has persevered so successfully. $65, 8pm Thursday, Gruene Hall, 1281 Gruene, New Braunfels, (830) 606-1281, gruenehall.com. —James Courtney 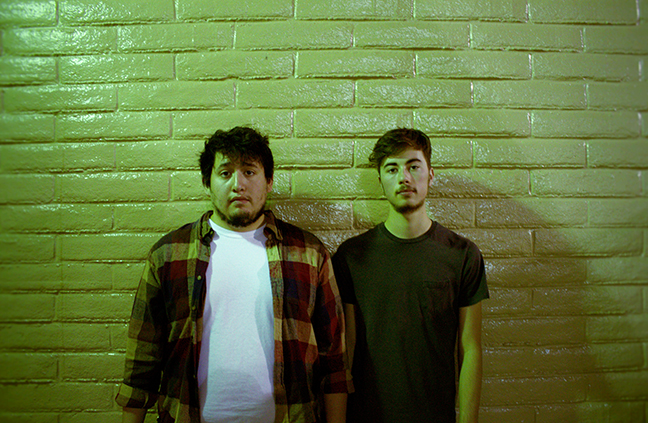 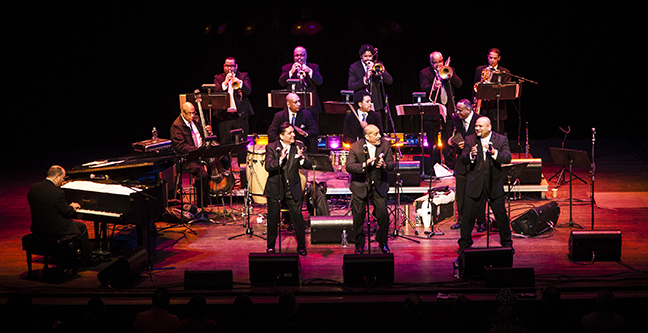 After decades of session work and arranging for the likes of Tito Puente and Celia Cruz, Bronx-born pianist/bandleader Oscar Hernandez teamed up with producer/composer Aaron Levinson to form Spanish Harlem Orchestra in 2000. Drawing from the rich Latin culture of its namesake ’hood and salsa’s 1960s and ’70s heyday, the 13-piece orchestra officially arrived in 2002 with the Billboard Award-winning Un Gran Dia en el Barrio, championed “hard salsa” in 2004 on the Grammy-winning Rubén Blades collaboration Across 110th Street and roped in Paul Simon for a guest spot on 2007’s United We Swing. $29-$110, 7:30pm Friday, Aztec Theatre, 104 N St. Mary’s, (210) 226-2891, artssa.org. —BR 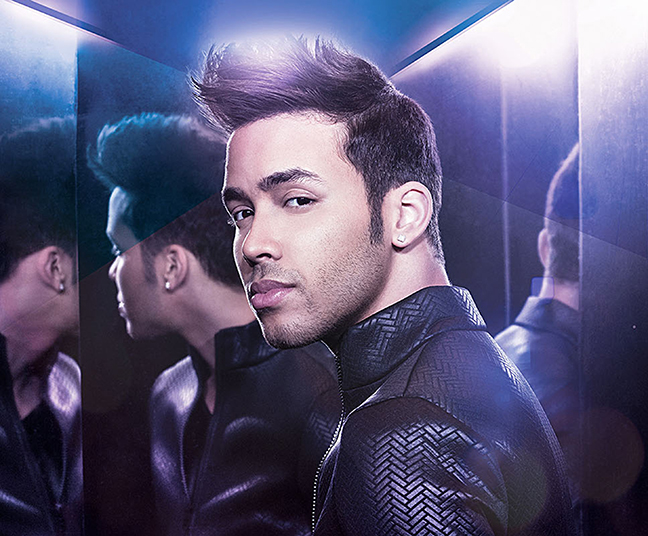 When it comes to modern bachata’s biggest stars, former Aventura frontman Romeo Santos reigns as King with Prince Royce (born Geoffrey Royce Rojas in the Bronx in 1989) shining bright as a young addition to the royal court. Emerging from the ranks of reggaeton, Royce infiltrated Latin and mainstream pop airwaves in 2010 with his tropical take on Ben E. King’s “Stand by Me” and has since performed in front of President Barack Obama, shared the Madison Square Garden stage with Santos and toured with Enrique Iglesias and Pitbull. The multi-platinum-selling artist plays SA in support of his third album, Soy El Mismo. $39-$125, 8pm Friday, Freeman Coliseum, 3201 E Houston, (800) 745- 3000, attcenter.com. —BR 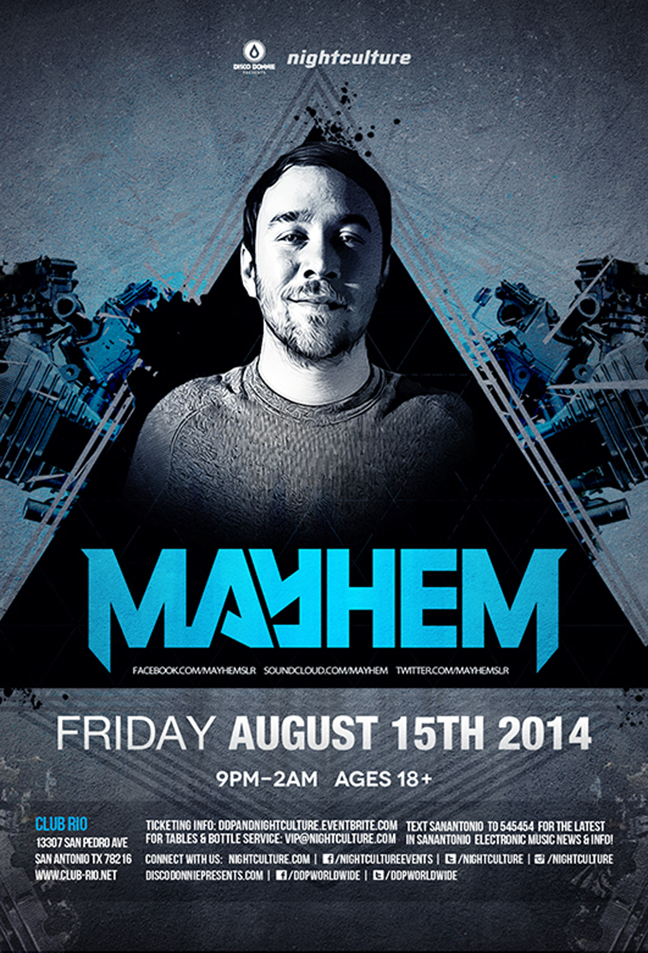 Not to be confused with the identically named Norwegian death metal band, Mayhem is a DJ/producer who delivers a multi-layered, hard-hitting mix informed by drum and bass, dubstep and the urban “trap” music that originated in his native Atlanta. Fifteen years into the game, Mayhem (aka Anthony Rotella) has proven his diversity via collaborations with hip-hop heads (KRS-1, Tyga and Gucci Mane) and electronic acts (Noisia, Heroes x Villains and kindred spirit Antiserum) and the Mad Decent “crossover” Transformers in the Hood. The rising star lands at Club Rio, fresh off a spot at Baltimore’s Moonrise Festival. $15, 10pm Friday, Club Rio, 13307 San Pedro, (210) 403-2582, club-rio.net.—BR 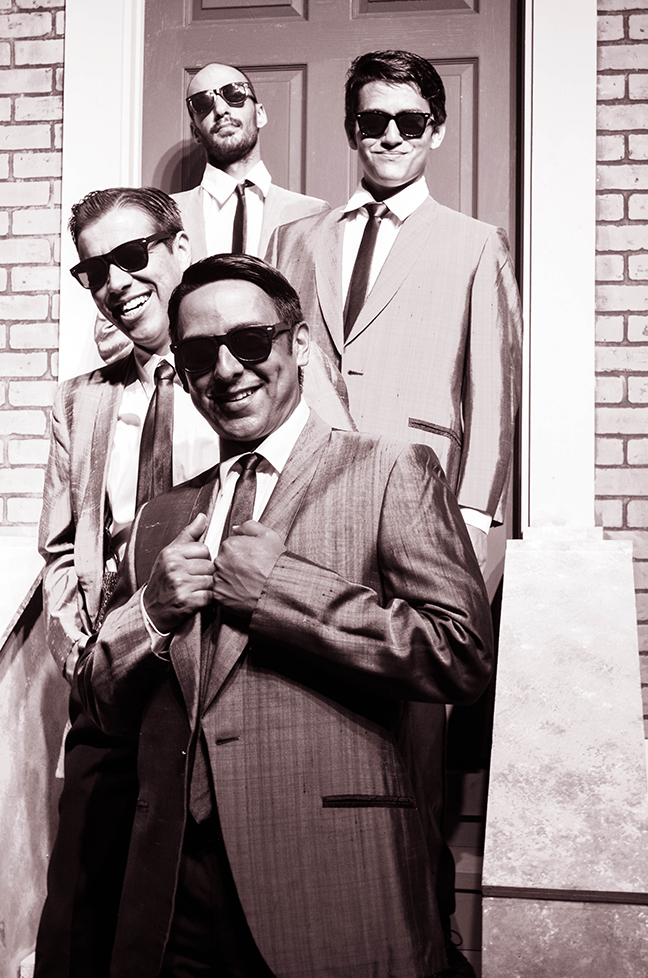 The hit-making legacy of songwriting duo Leiber and Stoller comes to light in the ’90s-era revue Smokey Joe’s Cafe. Lifting its name from the Robins’ 1955 single, the bookless musical revives 39 rock and R&B classics immortalized by the likes of Elvis (“Jailhouse Rock”), the Clovers (“Love Potion No. 9”) and Ben E. King (“Spanish Harlem”). While some find the absence of dialogue and theme off-putting, The Guardian wrote, “Whew—no pesky plot developments or subtexts, just a glut of glowing pop tunes.” Chris Rodriguez directs and choreographs at the Woodlawn. $15-$23, 7:30pm Friday-Saturday, 3pm Sunday, Woodlawn Theatre, 1920 Fredericksburg, (210) 267-8388, woodlawntheatre.org. —BR 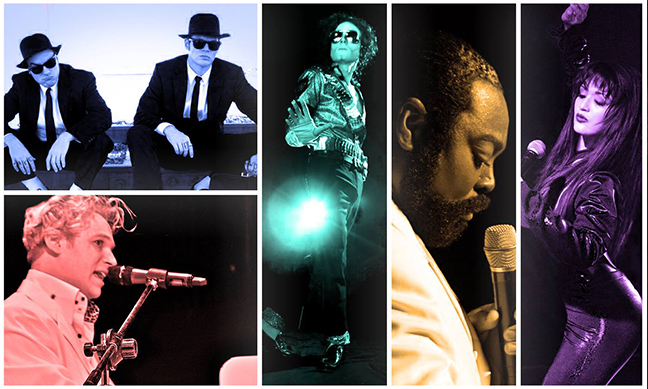 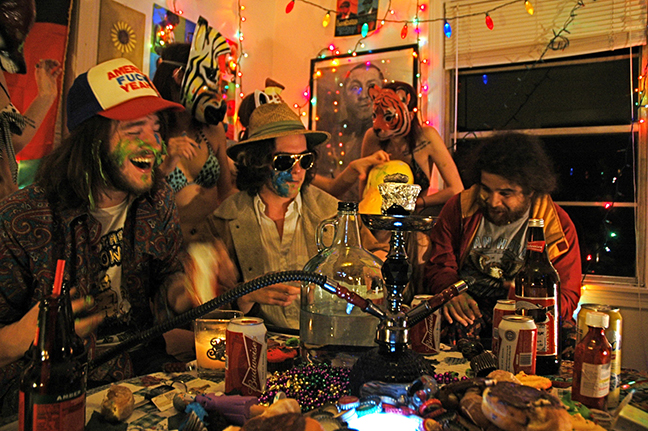 Sometimes it seems like fuzzy, distorted garage-rock music was invented to accompany the sweaty days of Texas summers. Saturday at Korova you can test this theory while enjoying a smattering of swell young bands from the Lone Star state. Some highlights of the evening will include the wailing, Jefferson Airplane-inspired psych-rock of Creatura, the hard-edged and bluesy psychedelia of Crown, the frenetic garage-pop-rock of the Rich Hands, and the surf-rock of Austin’s Lochness Mobsters (above) and Ft. Worth’s Fungi Girls. It’s an ideal opportunity to sweat out the dog days of summer with some fuzz. $5-$7, 9pm Saturday, The Korova, 107 E Martin, (210) 995-7229, facebook.com/thekorova. —JC

Learn how to put a song on itunes at ReverbNation.com 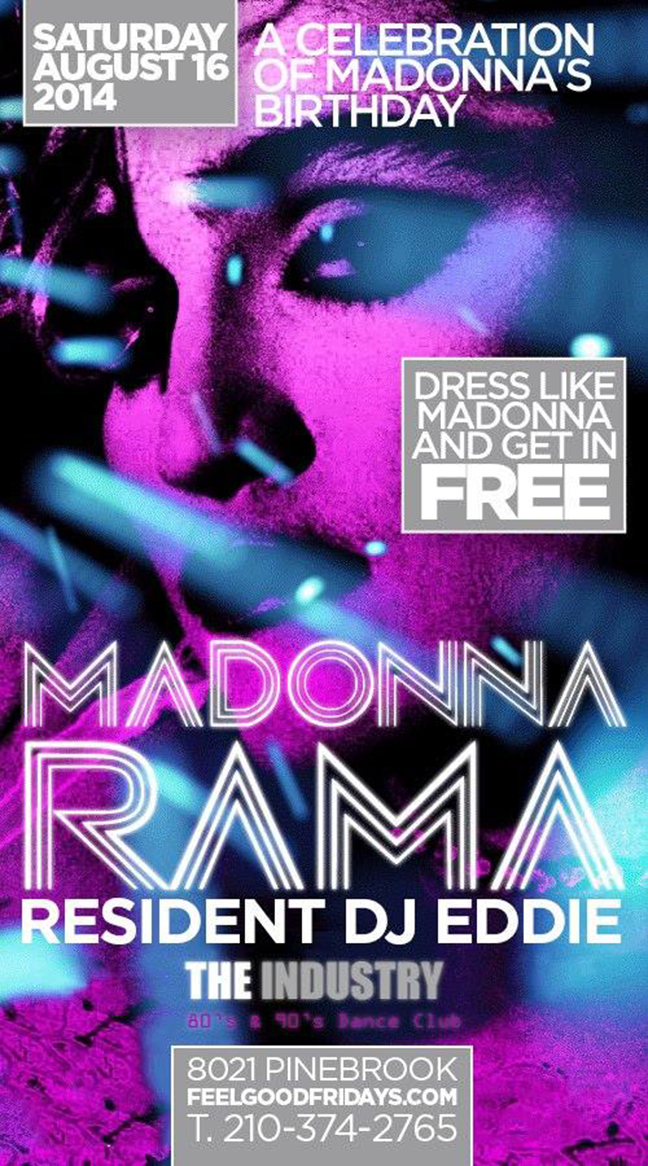 Before Miley, there was (and still is) the original material girl. This Saturday, Madge’s birthday, DJ Eddie celebrates the ruling queen of pop and the best-selling female artist of all time. Even today, Madge’s onslaught of hits can make even the most bogus party tubular. ’80s slang aside, Madonna is still hip, proving her coolness has no expiration date. Free for those dressed like Madonna, 9pm-2am Saturday, Industry, 8021 Pinebrook, (210) 374-2765, facebook.com.